Why do programmable sound generators like SID include a noise generator?

In layman's terms, please explain the reason that all the popular PSG's used in 1980s computers and game consoles provided an additional channel to generate programmable "noise". How was this "noise" used to create more realistic or interesting music and sound effects? Also, it seems that the noise channel is absent in the later chips using FM synthesis. Why is it no longer required for that generation of on-chip synthesizer?

One basic distinction in acoustics is the one between sounds that oscillate with a pattern that is repeated over time and sounds that are chaotic in nature, and show no repetitive pattern.

Sounds of the first type may be referred to as "tones". There are a few tones that can be described by a very simple mathematical equation, for example the the square wave, the pulse wave, the triangle wave, and the sawtooth wave (listen to the examples on the Wikipedia pages to get an idea what they sound like). The shape of some of these waves are shown in this image: 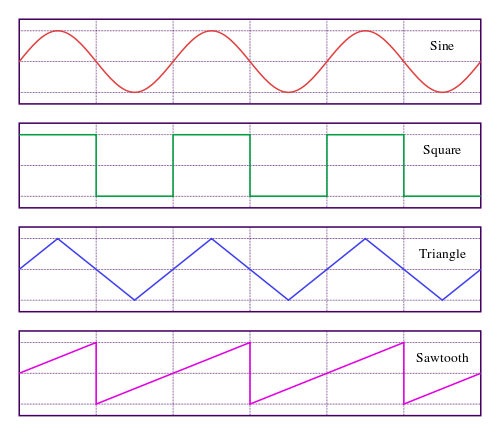 By changing the rate of repeating patterns per second, tones can be played at different pitches. As they are so easy to describe mathematically, many early sound chips used them to produce music and tonal sound effects.

The second type of sounds may be called "noises" – a noise is a sound without any clearly repetitive pattern:

Due to this lack of repetitions, you can't produce noises at different pitches as easily as tones, so they're rather useless if you want to play a tune.

It's extremely difficult to emulate noises by using one of the tones, so a sound chip that produces only one of the basic tones will have problems producing one of these natural sounds. But noises are also fairly easy to describe mathematically: simply send a sequence of random values to the speaker, and the result will be static noise. In fact, that's what you're listening when you listen to static coming from a radio that isn't set to a station: random fluctuations of the radio signal.

So, for early sound chips that didn't have much computing power, the two types of basic sounds complemented the range of sounds that could be produced with little effort: simple tones for music, and noise for naturally sounding effects.

However, these chips were restricted to the tonal characteristics of the basic wave forms that they supported, none of which sounded like a real musical instrument. This is the charm of Chiptune music: it's clearly synthetic, and closely linked to a particular type of devices. So, in a way, by using these devices for creating music, a new and unique class of musical instruments was developed that sounded unlike anything before.

Later chips used FM synthesis to produce tones, which is a radically different approach to manipulating the shape of tonal waves. This allowed for a much expanded range of possible sounds, and all of a sudden, real musical instruments could be emulated.

Some of these cards, for instance the Ad Lib card which was the first affordable sound card for x86 PCs, did not contain a noise chip, and therefore relied on FM synthesis also for sounds that are typically noisy in nature, for instance snare drums or cymbals. I know many people who hated the sound of the Ad Lib cards exactly for this reason: due to their lack of a noise generator, the drum sounds lacked all punch. Just listen for example to the promotion video for the Ad Lib card, and you will hear what I mean.

Many PSG's (Programmable Sound Generators) at the time (such as the popular AY-3-8910) were made for applications like doorbells, kiosk machines, etc. And, of course, arcade machines and computers.

The reason they had noise channels was simple. We need a way to synthesize sounds like drums, snares, and explosions. The best way to do that is to use random noise. Tones made with square waves, triangle waves, etc. don't sound as good as a random noise channel when you're trying to blast aliens.

Tones sound good for the laser, just not the explosion. :-)

There were many different ways the noise channels were randomized with different frequencies and random "seeds".

But, at the end of the day, they used noise channels for sounds that cannot easily be produced with generated tones.

Also, keep in mind, digital audio recording wasn't an option at the time. While it was possible (and did happen from time to time), it wasn't very practical.

PS, the SID doesn't have a dedicated "noise" channel. Each of the three channels can be noise, triangle, saw tooth, etc.

In some systems, the noise channel could be used as a cheap source of pseudo-randomness, such as in the Atari POKEY (read address 0A). Here, cheap means that the CPU can do other things whilst the randomness is being generated. This is useful because decent randomness is expensive to compute on general purpose hardware.

Taking the example of the Atari POKEY, the randomness is generated using 8 bits of a 17-bit polynomial register. A polynomial calculation is implemented in hardware similarly to a CPU's multiplication instruction so can take a similar length of time, but implementing one in software is O(n) (not O(1)). Thus, this randomness channel can have uses other than audio generation.

There are many acoustic events - drum beats, steps, explosions, breath, abrasion, clicking... that are based on a lot of harmonically unrelated frequencies in relatively irregular patterns. Which is more easily synthesized by taking noise and filtering/ADSR-ing the unwanted parts away than controlling a lot of oscillators independently.

Note that true white noise "has it all" - you could put a very narrow bandpass and an amplitude stabilizer behind a white noise source and have something very close to an oscillator defined by the bandpass center frequency (actually, a lot of oscillators are exactly that, albeit in a non-obvious way).

Many games have explosions. Explosions seem more like explosions when there's an associated a burst of noise than when there's a beep. Having other kinds of noise for things like engines is also good, but it's not too hard to get decent rumbly sounds out of tone generators. Explosion noises, however, would require changing the frequency setting much more often than rumbly sounds.

Not the answer you're looking for? Browse other questions tagged hardware commodore-64 digital-audio or ask your own question.

2
Why does the SNES have a separate memory bank for sound?
8
Was the output of the C64 SID chip 8 bit sound?
38
Why did the VIC-II and SID use 6 µm technology in the era of 3 µm and 1.5 µm?
5
SID, sampled sound and bad lines
5
Why does the Galaksija's latch include some kind of address remapping?