Why does the FAT file system have separate ‘hidden’ and ‘system’ attributes?

File systems used by DOS and Windows have used file attribute bits as a relatively prominent feature. The first of them, FAT, exposes four attributes to the user: read-only, archive, hidden and system. (There are a few more used internally, but they do not concern us here.) The function of ‘read-only’ is self-explanatory. ‘Archive’ is somewhat less obvious, but once you look it up, it also seems sensibly motivated: it denotes that the file has been modified since last backup. ‘Hidden’ makes the file not appear in normal directory listings and makes it harder to accidentally delete, as basic protection against inattentive or perhaps too adventurous users, while ‘system’… does the same.

For as long as I can remember, applying the ‘hidden’ and ‘system’ attributes has had virtually the same effect, and they were usually used together, often in conjunction with the ‘read-only’ attribute: most notably, for the DOS kernel files IO.SYS and MSDOS.SYS. As such, the attributes seem pretty much redundant to each other; although more recent releases of Windows seem to have started subtly differentiating between them, with ‘system’ acting as a ‘super hidden’ bit of sorts, whose hidden-in-listings effect has to be separately disabled, and which sometimes triggers strongly-worded discouragements when the user attempts to delete the file. But this doesn’t seem to be what motivated the addition of the ‘system’ bit in the first place, back in MS-DOS 2.0 (if not earlier). So what was the real motivation?

The attributes are documented in The MS-DOS Encyclopedia as follows:

In practice their behaviour is the same, but their definitions aren’t redundant: a system file is a hidden file used by the operating system, whereas a hidden file is any file which shouldn’t appear in a regular directory listing.

Hidden files were added in version 1.10 (in Microsoft versioning; the version of DOS actually available as 1.10 was 1.25); bits 1 or 2 could be used to hide a file, and the source code comments didn’t distinguish them.

Although MS-DOS didn't come bundled with utilities to change the flags, it was useful to distinguish files that could be casually hidden and unhidden from those which shouldn't be. While I doubt this was the original intention, the ability to temporarily "hide" files among other things made it possible to exclude files from wildcard operations, and PC magazine published a utility called NO.COM for that purpose. The basic notion is that if one wanted to copy everything other than woozle.dat and foozle.dat from one disk to another, one could hide woozle.dat and foozle.dat, then copy *.*, and then unhide everything.

The usefulness of the system flag was further enhanced with disk defragmenting utilities came on the scene. Some files, including the boot files that were first marked by the "system" attribute, need to be located at certain locations on the disk in order to serve their intended purpose. Disk defragmenting utilities would generally use the "system" attribute as an indication that they shouldn't do anything at all with a particular file.

I don't know whether the designers of these attributes had such abilities in mind, but the ability to prevent the storage associated with files from being touched can serve a number of purposes:

None of those purposes would have been served effectively without a system/hidden distinction.

Like much other details the attributes are in part inherited from CP/M. CP/M stored them in the top bit of the file name and type (*1). This was possible as file names were defined as 7 bit ASCII, so the 8th bit was 'free' to be used (*2). In Detail these were:

Well, or not. While it's common knowledge that PC-DOS is based on CP/M, this is not entirely true, as it's file system is based on the 8 bit FAT used with Microsoft's Stand Alone BASIC-80, which Patterson adapted for SCP's 8086 S100 board before creating 86-DOS which later became PC-DOS. BASIC-80's directory was based like CP/M on 16 byte entries, but with a different layout: 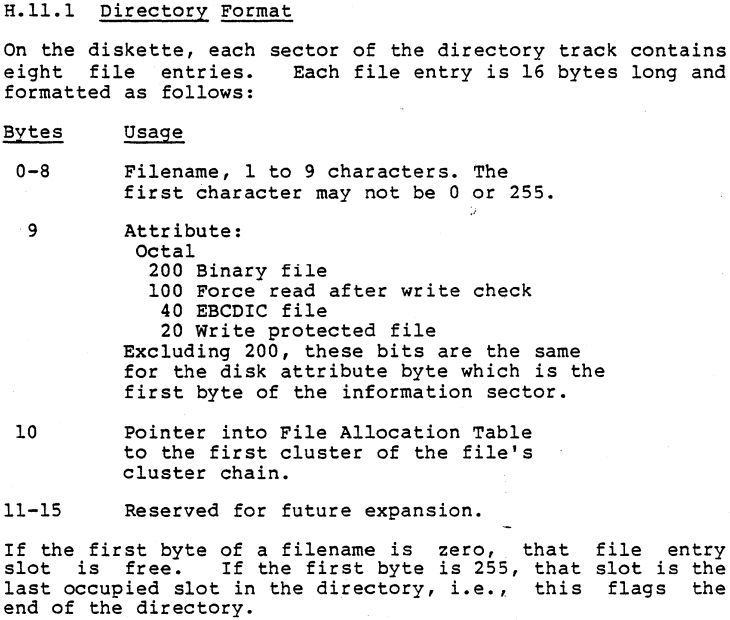 It already featured an attribute byte, but except for Read-Only (10h) none match any CP/M attributes. What Patterson did was increasing the file name length to 11 bytes for CP/M compatibility. It is not clear what attributes were included.

For 86-DOS the introduction of 32 byte directory entries is documented with version 0.42 of February 1981 as seen in the MS-DOS.ASM file. This was done on request by IBM to incorporate a file creation and last changed date as well as increased file size(*5). It is not clear how much Marc McDonald's MIDAS OS, which as well used 32 byte entries, influenced this. What's clear is that the 12 and 16 bit FAT structure was taken from there.

In addition, the very first known pre-release of PC-DOS, which may match 86-DOS 1.10 of July 1981, notes in point 2 of it's 'COMMENTS.TXT' file the introduction of 'a new attribute byte' whose flags prevent system files from being shown.

The source presented on Github as MS-DOS 1.25 may neither be MS-DOS nor PC-DOS but rather some version of 86-DOS from after MS took the source (Q-DOS 1.10) and independent of Microsoft's development. It's missing several functions, including GETRDONLY and SETATTRIB being a null function.

Comments in MS-DOS.ASM mention that hidden and system, each on its own, would make a file not being displayed. No other attributes are mentioned.

Considering all of this it seems plausible that IBM requested that flags from Microsoft to be able to handle system files and hidden separate, even though it was later only sparsely used.

*2 - Of course file search operations had to mask them away before comparing.

I think to explain these features, you'd have to acknowledge that a common distinction exists between some sort of "system administrator" (someone generally responsible for the provision and oversight of the system) and a "user" (someone who uses the system without being an expert about all its internal details or workings).

The system flag is amongst the provisions made for distinguishing between system and user files. Other methods exist alongside nowadays, including special directories (such as the "Windows" folder).

How exactly these flags are used, and whether the system flag has any effect separate from the hidden flag, is probably something that has been subject to varying practices over the years.

There was probably not intended to be only one way in which these flags could ever be used - rather, they were provided to create flexibility for making distinctions between files, on an exact criteria that may only be decided later.

The "system" marking is completely orthogonal to that definition of "hidden", notwithstanding that later file browsers hid both from the user by default.

Once point-and-click GUIs became available for file management, the role of the hidden flag as being a mark against a file that alters its handling by programs that process multiple files, probably receded, to be replaced by selections that could be made more dynamically by the user in the GUI.

The use of the system flag to mark system files amongst a mixed collection has also receded, with directories more consistently used to keep the two kinds apart. When these flags were first designed however, additional directories meant more typing for commands and navigation.

What remains nowadays is more or less vestigial, and both hidden and system flags are used mainly to record that files should not be displayed to the browsing user by default, with little other practical function to distinguish the two.

I'm not particularly familiar with the actual history of how and when the "hidden" and "system" attributes were introduced (which fortunately has already been addressed in other answers), but to answer your question of why both of these attributes exist, I can certainly reconstruct a plausible chain of reasoning. It goes something like this:

Notably, other operating systems such as Unix solved problem 1 in a different way, by having multiple user accounts and implementing file ownership and permissions so that only privileged administrator accounts (only intended to be accessible by a few properly trained users) can modify critical system files. Thus, they never had the same need to hide system files from accidental manipulation as single-user operating systems like MS-DOS did, and thus never ended up with these two file attributes.

While Unix did end up implementing its own way to hide user files from directory listings (by prefixing their name with a dot) and also using it to hide some user-specific system configuration files, the situation is still substantially different: even if a non-admin user on a Unix system accidentally deletes all their dotfiles, they'll still have a fully functional OS that will boot up and even let them log in and use the system, only losing a bunch of their personal settings (and of course possibly some data, depending on what else they deleted). While this may certainly be a frustrating situation for the user, the crucial difference is that the OS is still working, so the user is less likely to blame the OS just because it "suddenly broke for no reason."

19
Why did MS-DOS choose the percent symbol to designate variables?

37
What was the point of Apple Pascal having its own file system?
17
Where was the Willowsoft Overture File System (OFS1) used?
2
File system performance and the Unix API
75
Why is Windows using CR+LF and Unix just LF when Unix is the older system?
24
Why does the single dot entry exist in file systems?
8
Why were the PlayStation 2 CPU and GPU initially separate chips?
15
Why did 1-bit DRAM chips have separate data input and output?
13
How did the /dev file system work in early Unix?
25
What was the first file system?
16
Why does Pascal have numeric labels?