How did Apple's 'CYA' chip function to "Control Your Apple"?

Unlike the original Apple ][, the Apple IIGS was built from highly-integrated custom chips. Among these were the Mega II and the CYA (which, apparently stands for "Control Your Apple").

From what I have read, all the discrete logic that made up the original Apple ][, plus the various enhancements in the //e, were replicated fully by the Mega II chip. This would seem to provide the necessary electronics for controlling the Apple IIGS expansion bus and compatible cards. So, what is left for the CYA chip to control? How does the CYA chip serve as an arbiter for peripherals builtin to the motherboard?

Also, is there a programmer interface for dealing with the CYA, and does it give the expansion bus of the IIGS any additional capabilities not found in the //e?

The "Control Your Apple ASIC" (CYA) was part of the "Apple IIGS 1 MB" introduced in 1989, which had 1.125 MB of DRAM and twice the ROM space of previous IIGS models. The CYA was much the same as the "Fast Processor Interface IC" (FPI) that earlier IIGS models had instead, and much of the technical documentation refers to either of the chips as the FPI. The new 1 MB model had version 3 of the ROMs and so this model is sometimes known as the "ROM 3" version of the IIGS.

The CYA/FPI exists to solve two problems while maintaining high compatibility with earlier Apple II models: allowing the newer, faster CPU to actually run faster, and to provide addressing to a larger amount of memory. Compatibility required that all the peripheral functions run at the older 1 MHz bus speed, including DMA (Direct Memory Access) from peripheral controlers to memory, so allowing the 65C816 CPU to run at a faster clock wasn't straightforward.

Consider the lower left of the IIGS block diagram from the Hardware Reference: 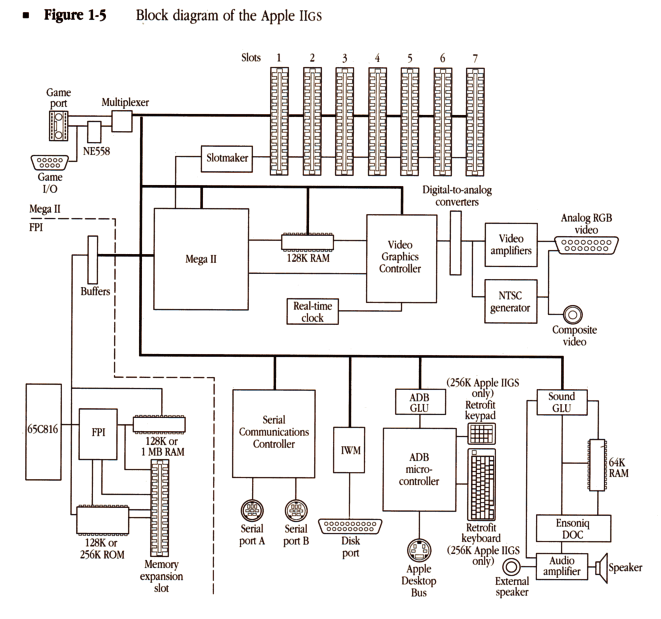 The CYA/FPI chip is there to control the timing and memory addressing in the FPI region. As long as the CPU accesses only memory in that region, the CPU (and the rest of the region) can be clocked at full speed. When the CPU has to access a peripheral or the memory residing in the Mega II region, the FPI chip reduces the region clock to 1 MHz. One of the memory functions of the FPI is to provide "memory shadowing" of some of the memory in the Mega II region (used for instance for the video display memory). This allows reads to use the FPI copy at full speed; only writes have to access the Mega II region at the slow speed.

The details of the CYA/FPI functions are more complicated than this; if interested you might want to watch this KansasFest "Apple IIgs System Timing and the FPI" video.

Not the answer you're looking for? Browse other questions tagged hardware apple apple-iigs or ask your own question.

19
Apple IIgs: Hardware implementation of RAM shadowing
16
How do accelerators and CPU cards work on the Apple II?
13
How did 2-chip CPUs work?
5
Does the Apple IIgs FPI assert /CROMSEL for *write* accesses to the extended ROM space?
6
Why does the Apple IIgs FPI chip buffer the A14 address signal to the ROM?
11
How did the Zip Chip and RocketChip accelerators work for the Apple II?
13
How did I fry my SID chip?
5
How does DMACON/R registers on Commodore Amiga platform work?
19
How did the Apple IIGS automatically slow 5.25 inch disk I/O code for backwards compatability?
7
How did Apple IIc daughtercard expansions work?