Lately I've been interested in how old machines work, in particular an NES. While there are quite a few resources on the basic operations and even some games that have been totally broken down byte by byte, there isn't much information on how this is done.

So far, I've found discussions on two different methods to accomplish this, but neither seems very efficient, so I'm curious to see if there is a better option. Firstly there's converting the hex ROM file into assembly code, but this is difficult to follow and deals with RAM operations, making it difficult to precisely where in the ROM the information is being drawn from. Secondly, you can go in and systematically delete or corrupt parts of the ROM file just to see the effects. I've personally had more success with this, but it takes forever, and is entirely guesswork and doesn't lead to a broader understanding of how the program actually operates.

Are these the only two viable options to doing this? Are there any patterns or behaviors I should be aware of? Thanks.

I used a disassembler to convert the program to assembly language and I then went through the code annotating it as I found out what it does. When I understood what a bit of code did, I would look for its entry point (my disassembler created labels for the target of every JMP and JSR) and rename the label to something useful. That would help me with other bits of code that called the piece I had just reverse engineered.

It helped that, having written an emulator, I was quite familiar with the memory mappings of the IO chips and certain important bit patterns. So, for instance, if I saw a bit of code writing a certain bit pattern to a certain address that I knew was mapped to one of the PIA ports, I knew it would be scanning the keyboard.

It also helped that I could run my emulator in trace mode (albeit very slowly) so every instruction is printed out as it is executed. So, for instance, when a space invader started appearing on the screen, I could look at the trace and see which bits of code were being executed.

It took some time and I basically suspended work on it when I found a bug that was caused by my emulator being too fast. I haven't figured out a way to make it run accurately at the correct speed yet.

To expand a bit, I used the disassembler (da65) from the cc65 tool chain. It has the handy ability to accept an "info file" so you don't need to annotate the generated source from the disassembler. So, for example, the first two bytes of a PET program file are actually the load address. I wrote the following annotation in the info file

which make the assembler treat the first two bytes as data and not garbage assembler instructions.

The next bit was a one line BASIC program that calls the machine code routine that is the start of the program proper. Again, I forced the disassember to treat it as data

This time it also causes the disassembler to emit a comment that tells you what it is.

And then it's just a case of laboriously going through the code identifying the function of various bits. For example, I found a short loop that tested a certain bit on one of the PIA registers which I know is the vertical retrace, so it is clearly syncing with the monitor. I add this annotation

and the disassembler creates a label for the routine as well as using the label in JSR and JMP from elsewhere.

I just answered a similar question of yours on stackoverflow.com which may help: https://stackoverflow.com/questions/43573269/how-does-a-6502-processor-transfer-data-between-rom-and-ram

I am not quite clear what you mean by "deals with RAM operations". Perhaps you could clarify?

Yes, reverse engineering is a long process. I am working on deciphering a games cartridge I wrote 35 years ago and am finding it difficult. Understanding what the code does is one thing but understanding why it does it is far more complicated and requires a good understanding of the console's hardware and the logical operation of the game.

Getting back to your real question though, somewhere in the code it must be accessing the ROM (and again I refer you to my response on stackoverflow.com). What I would do would be to search the disassembled code for any reference to the ROM area. So, for example if your ROM starts at $C000, run Find commands from your text editor for $C, $D, $E, $F. Hopefully that will locate something that might get you started.

The reverse engineering Robotron 2084 for the Apple II topic on forum.6502.org discusses, through several dozen posts over a few months, forum user fschuhi's reverse-engineering of the Robotron: 2084 game on the Apple II.

He did this using execution tracing of with Apple II emulator (written in Python), what appears to be a homebrew disassembler, xlwings to interface Python with MS Excel, and further homebrew Excel code to help with the disassembly and analysis, including creating heat maps of memory accesses and DOT code to describe call graphs. He's essentially created a workbench that lets him run parts of the code, analyze what happened during the run and annotate a disassembly with this information. It's brilliant work.

Sadly, the code for all this is not available. (fschuhi said he might refactor it and upload it to GitHub at some point, but the project seems to have been set aside for the moment, so I wouldn't hold my breath waiting for that to happen.)

That said, just looking at the images and reading the text provides a lot of good ideas.

Here's the top level of the workbench, with a bit of disassembled code: 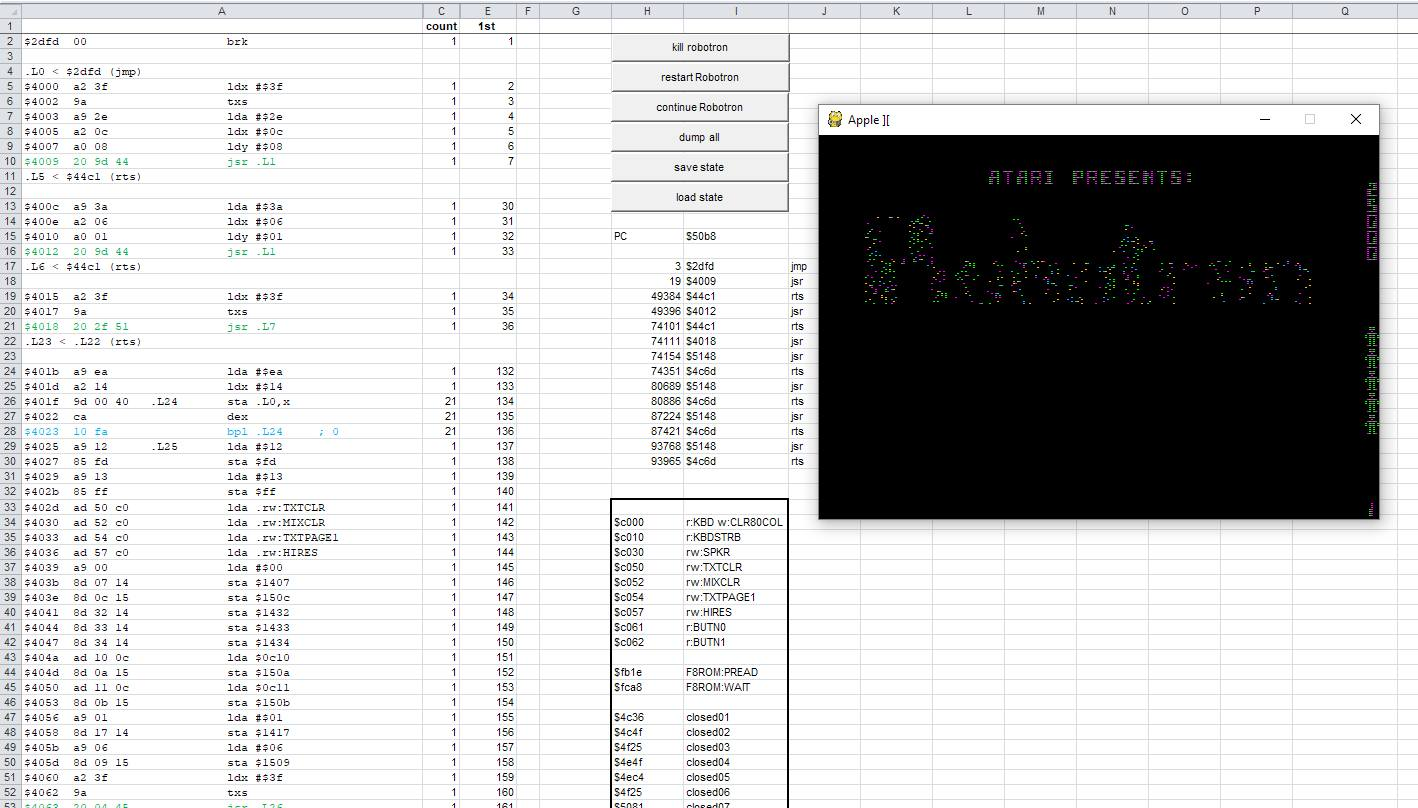 Here's a call graph of the code that generates the title screen:

And here's a heat map showing reads and writes to a small area of memory. (These can be zoomed out to let you easily see all memory accesses done by any particular routine you emulate.) 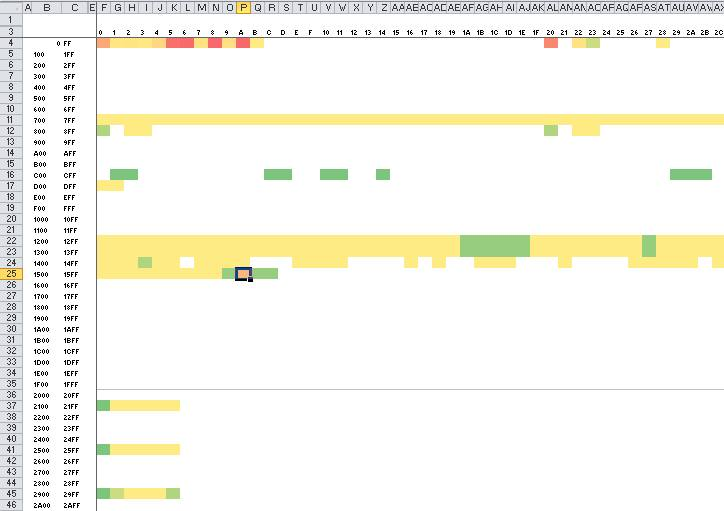 If you want to get proficient with the first option, that is disassembling a ROM and finding out which part does what, you should get used to an interactive analysis tool that responds immediately to adding label names, retyping data, declaring something as code and shows proper cross-referencing. The two best-known freely available tools that include 6502 support are:

None of these tools comes with NES-specific support (like names for NES hardware registers) in the standard install (at least I didn't stumble across it during the quick evalution for this answer), but both support scripting. I suspect that (at least for IDA, due to its age) NES analysis support scripts are available.

Getting used to static analysis with tools like this takes some time, and using them in conjunction with an emulator with debugger is likely the easiest way to get started. With some experience, these tools add a lot of value though by you being able to document your analysis results (mostly by adding comments and renaming things) and the cross-referencing functionality ("show me where this variable is written from").

Not the answer you're looking for? Browse other questions tagged nes rom 6502 or ask your own question.