Why did the Atari 800 designers choose such a radical system design?

The physical system design of the Atari 800 was pretty radical, when compared to the 3 other canonical home computer designs of the late-1970s: TRS-80 Model 1, PET, and Apple ][.

As the photo of the Atari 800 main and CPU board shows, the main board was slotted, but not for the purpose of interfacing general peripherals and enhancements, like in the Apple ][ or later IBM PC. Rather, the Atari 800 had a very modular construction for which not only the CPU, but also all RAM, ROM, and firmware were added via cards. Of course, the 1977 trio were all built with an integrated motherboard that included CPU, RAM, and ROM instead of Atari's modular approach.

What would be the rationale for the Atari designers to take this radically different approach compared to the aforementioned competitor systems?

(Backplanes weren't new, but the Atari 800 came out two years after other home computers had abandoned such a design. see above) 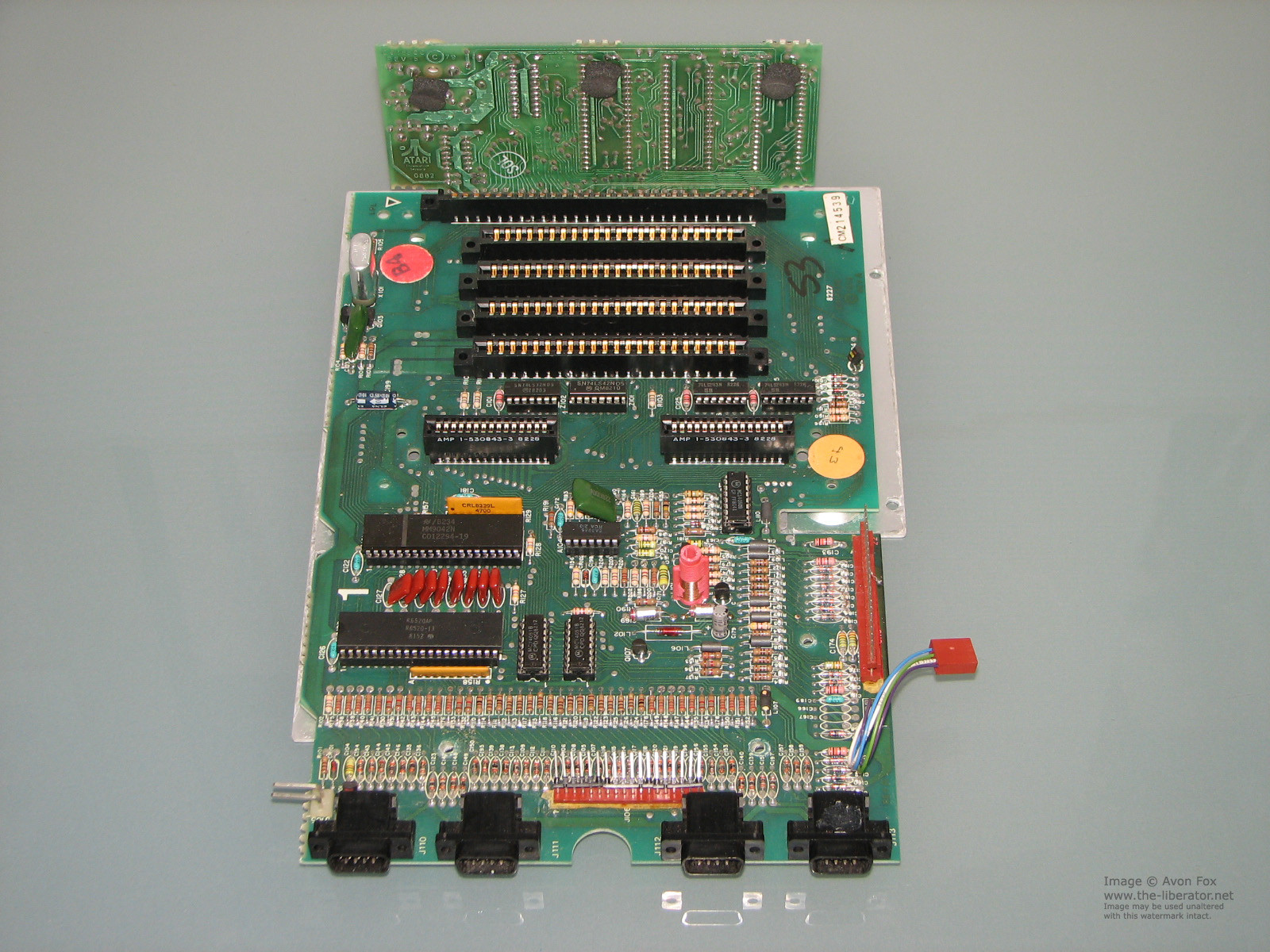 The physical design of the Atari 800 was radical, but not for reasons related to the aspects you highlight.

As others have commented, using multiple boards for a system was pretty standard at the time. S-100 systems for example were based on a backplane, with system features implemented on multiple boards connected to that. (The Atari 400 and 800 were designed using a Cromemco S-100 system — I don’t know whether that had any direct impact though.) The Atari 800 has three main boards: the “motherboard” (containing POKEY, PIA, the memory decoder, and all the system connectors), the CPU board (containing the 6502, CTIA or GTIA, and ANTIC), and the power supply board. User-accessible boards (initially sold as cartridges) provide the ROM (“system personality”) and RAM (not firmware though — what we’d consider firmware nowadays was provided by the external devices themselves).

The main drivers behind the design appear to have been:

Both of these were radical departures from the other personal computers of the time; the first in particular had far-reaching consequences. Instead of opening up the whole system to access expansion cards, Atari 800 users could open the first flap to connect cartridges containing software, the second flap to change their system’s ROM or RAM, and anything else was connected to the joystick or SIO ports. To keep all this safe for users, the flaps had interlocks which ensured that the system was powered down when the flaps were opened; unless the users went out of their way to circumvent them (well, it wasn’t that hard really, but it couldn’t happen by accident), there was no risk of connecting or disconnecting a cartridge while the system was powered up. To keep all this easy to use, the designers had to come up with some rather novel ideas: the SIO bus in particular was far ahead of its time, with device-supplied drivers loaded automatically (the descendant of SIO is USB, amazingly enough).

Coming back to the multi-board design, it does have some nice features, which might explain why it was kept at least for the initial system. Having a separate power supply board means that the main board and power supply board can be designed separately, by experts in the respective fields — these different kinds of boards require different kinds of expertise to design well. It also means that the main board can be bread-board designed without too much regard for the power supply; Goldberg and Vendel’s Business is Fun shows that bread-boards were used extensively. Keeping the CPU, TIA and ANTIC on a separate board might have been relevant because that whole section of the computers took a while to settle; the same book shows that the designers were still contemplating different CPUs late in the system’s development.

One very nice benefit of using different boards like this, is that the CPU and RAM boards could be re-used as-is for the Atari 400 (which was re-designed, or perhaps just re-specified and designed, in a hurry not long before launch). The Atari 400 shares the same design, with a separate power supply board, main board (which includes the ROMs), and separate CPU and RAM boards (neither of which are supposed to be user-serviceable in the 400).

Another nice benefit is that the base memory configuration could easily be changed to take advantage of price variations in the market. The Atari 800 was supposed to ship with 8K of RAM (hence its name — the Atari 400 was planned with 4K), but as RAM prices fell, its base configuration improved progressively until it ended up shipping as standard with 48K a few years later. This would be possible with socketed memory chips on a big motherboard, but that approach is a little more restrictive. The Atari RAM boards are in some ways like early SIMMs, and allowed Atari to increase chip density without changing the motherboard (the boards were available in 8K and 16K variants, with the same number of chips).

(The design wasn’t without its flaws of course. The initial cartridge design used for ROM and RAM made for poor airflow and created thermal problems, so the metal shielding around the cartridges was removed in later models, and the second flap’s plastic latches were replaced by screws. For completeness’ sake it’s worth noting that expansion wasn’t limited to the external ports entirely; the last RAM slot could be used for other kinds of expansion boards.)

The Atari Museum’s page on the Atari 800, the Wikipedia entry, and the above-mentioned Atari Inc.: Business is Fun all give further background on the design of these systems.

I'm pretty sure the main reason for the slots was to keep the cards vertical, for cooling purposes. Airflow went straight up the slots and out the top.

In theory, they could have implemented this with two PCBs, and stacked them. This would trap significant heat trapped between the two. Recall that they had to take the packaging off the cards even in the 800 because of heat problems.

They could have put everything on the verticals, but you'd still need a backplane anyway, so you may as well use it for something other than just power.

Not the answer you're looking for? Browse other questions tagged hardware atari atari-800 or ask your own question.