Why was OCS low resolution limited to 6 bitplanes?

I'm looking for information whether there has ever been an official statement by Commodore back in the days on why the Original Chipset was limited to doing 6 bitplanes only when running in low horizontal resolution. 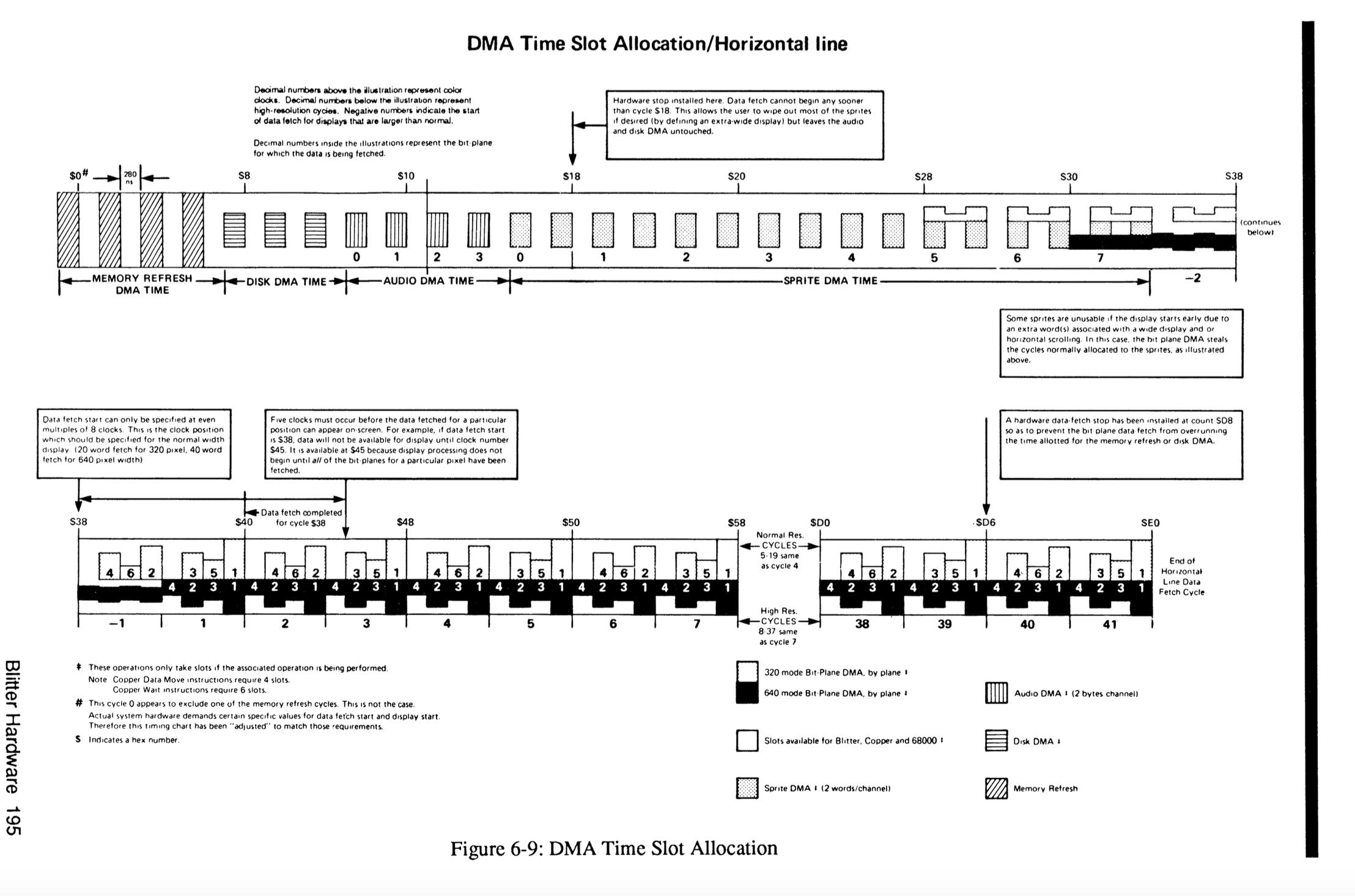 Enabling 8 bitplanes in low resolution would have saturated the chip ram bandwidth, much like 4 bitplanes in high resolution, therefore making the machine sluggish as 4 bitplanes high res makes it. But then, why not limit high res to 3 bitplanes?

Adding 2 more bitplane pointers, 2 more shift registers to Denise, and more CLUT registers does not seem to me like a huge hurdle, even in 1984/85.

What other reason could it be?

IIRC, the primary reason for the decision on 6 bit planes was die area. Registers (control and shift, but especially if the LUT was expanded) take up measurable die area. The original bottom end price target was for an under $400 Hi Toro game machine. This allowed only 32 kB of DRAM, and 8 bit plane layers was far more than fit in memory. So why increase costs of the higher volume target?

The higher price target home computer decision came after the chips were floor planned... too late to change things and floorplan larger ASICs, given the extremely limiting R&D budget and aggressive schedule.

Also, hold-and-modify was an option for game designers who wanted to display more colors.

There is no official statement by Commodore because they had no clue how Hi-Toro and Amiga, Inc. designed the system and OCS over a year before their purchase of the technology.

You are underestimating the on-chip costs of additional colors at that time. Supporting six bitplanes was already maxing out the possibilities, which is best illustrated by the fact that there were not enough CLUT registers even for six bitplanes, but only for five (32 colors), so six bitplanes could only be used via EHB, HAM or Dual Playfield mode.

Besides that, reserving all cycles to the display DMA implies that neither Copper, Blitter nor CPU (in the absence of real FastRAM) could do anything while the display data is transferred, i.e. could only work during the blanking phase and that with even more graphic data to process. Such a display mode is not very useful for real applications (you may try a 256 color SuperHires mode on an AGA machine without FastRAM to get the idea)… So the benefit would not have justified the higher chip costs.

This allowed only 32 kB of DRAM, and 8 bit plane layers was far more than fit in memory.

Claims that there would be problems with copper, blitter and 68K are inaccurate, since we have all see 16 color, Hi-Res Amiga OCS screens. That's the exact same same amount of data as an 8 bitplane low-res display. In short, if you can do 4 bitplanes in high-res, you can do 8 in low-res. The color register count is the real issue.

Also, "CLUT" does not really apply to the Amiga. "Lookup tables" is a crass PC concept used by software people who don't understand hardware. You know, the kind of guys who think everything is a Sprite. The Amiga uses Indirection to gate RGB values from the color registers. Even the Sprite output goes through the same circuit. There is no "lookup". There is no table. A 5 bit value selects which of the RGB registers have their bit patterns gated out to the DACs.

It should have been done. But at the time, 32 color regs, whose RGB levels you could change, plus a HAM mode must have seen like a ton when the specs were set in 1984. Hell it was still viable in 1994.

Commodore seemed to realize that more was better, and EHB mode was added. I can't recall if this was an OCS revision or only in ECS and later. It used 6 bitplanes but was saddled by having only 32 color registers, so they used the 6th plane for a half-as-bright modification to the register define by planes 1-5.

You have to wonder why they didn't add more color registers- it should have been doable without blowing compatibility.

Not the answer you're looking for? Browse other questions tagged hardware amiga graphics or ask your own question.

27
Why is the Amiga ROM at a high memory location, and RAM in low memory?
13
Why did Commodore not upgrade OCS straightforwardly to 32-bit architecture?
10
NTSC scan lines and vertical resolution
10
Can artifact color mode create 262,144 colors on Amiga OCS?
9
How many gates does each chip in OCS have?
5
How were individual bit planes scrolled on the Amiga (OCS)?
10
Low-cost sound chip
13
Amiga 500 OCS/ECS vs Mega Drive VDP
8
Why was the VT05 resolution 72×20?