Is it possible to adapt a standard PC floppy drive to work in an IBM PS/2?

I have three different IBM PS/2 machines and all of them are in perfect working order—except for the floppy drives. None of the floppy drives will read disks, which means all I can do is key in BASIC programs. This gets old fast, especially for an assembly-language programmer!

I don't have any "spare" PS/2 floppy drives, and even if I did, they would very likely be broken, too! For some reason, these drives just didn't hold up well. And have become extremely scarce in the intervening years.

However, I do have a pile of standard 3.5" floppy drives that work just fine. (Some of them even older than the broken PS/2 drives.) It would be really nice if I could just drop one of these drives in my PS/2s. Unfortunately (and quite ironically), the PS/2 series is not IBM-compatible. Their floppy drives used a card-style "edge" connector that carried both power and data, and plugged directly into a slot on a daughter-board.

The photo on the left shows a front-shot of an OEM PS/2 floppy drive, just like the ones in my machines. The photo on the right is a better shot of the connector on the back. 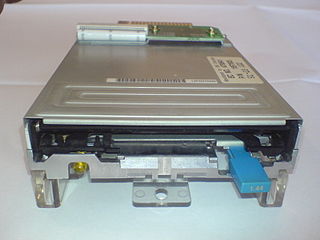 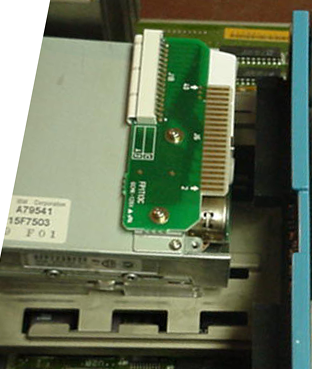 (Left image courtesy of Tomáš Slavotínek. Right image adapted from original by Dale Mahalko. Both are via Wikipedia, licensed under CC by-SA.)

Is there any way to adapt/convert this proprietary PS/2-specific connector to allow a standard 34-pin PC floppy drive to be plugged in? The data and power are both provided on the PS/2 connector, so there should be a way to build an adapter. Anyone know of a source for a pinout? Better yet, has ever done this before and know that it works?

(Assume both drives have identical capacities, so that once the electrical interface problems were solved, the software should work without a hitch. The PS/2 supported 1.44 MB and 2.88 MB 3.5" floppies, but all of mine are 1.44 MB drives, and that's the same capacity of "standard" drive that I'd want to replace it with.)

Disclaimer: I don't have enough experience to know which of these pins, if any, need to be NOTted in the converter. I could not find information about voltage either, so I have ignored it.

Use a multimeter before trying this. Make sure that the test floppy is unimportant and that you disconnect the drive if it is making suspicious noises.

In addition, Giskard42 suggests that "[...] when playing around with an unsure comms protocol, you use a series resistor for everything except power [because] if you have a 1-10k resistor in series with each connection you make, the chance of blowing anything up becomes very low."

Here is the pinout of a 34-pin IBM-PC floppy connector, excluding reserved and ground pins:[2][3]

All of the odd-numbered pins are ground.[3]

To install a standard and modern 1440 KiB floppy drive, without any modification to your computer (and keep original wiring), you should work only on your floppy drive, as follows:

Finding the perfect eject button is another story, but it is possible.

On YouTube, retrospector78 has released a video covering this topic among others; the above follows their instructions.

Did you try opening the drives up and giving them a good cleaning with isopropyl alcohol first? Sometimes the problems with old floppy drives is mechanical. Their step motors get stuck, or the lube on the screw drive dries out and the heads can't move. Make sure the heads are able to move with a little nudging. Clean them gently with a cotton swab. (Don't use store brand isopropyl alcohol, those leave a residue. Use electronics grade isopropyl alcohol.) Lube the screw drive and shafts with a little bit of lithium grease. These might solve the problem if it is due to a mechanical reason. If the drive still doesn't work, check the electrolytic capacitors. They tend to dry out over time. There are various videos on youtube about replacing electrolytic capacitors on old floppy drives.

Not the answer you're looking for? Browse other questions tagged hardware floppy-disk restoration ibm or ask your own question.

12
Replacing the floppy drives in my Amiga 3000
13
Only “Drive A:” detected with two floppy disk drives
12
Which Apple floppy drive is compatible on both Apple IIc and Macintosh
10
USB floppy drive emulator, is there such a thing? and if so, where can I get one
10
Commodore VIC-20/64/128/16/Plus 4 floppy disk drive replacement
9
Were external floppy drives for Atari ST and Amiga inter-compatible?
6
How to backup/dump Atari 520st floppy disks on modern hardware
11
What physical size and density floppies are the intermediate-capacity options for the /F switch of the DOS/Windows/OS/2 FORMAT command meant for?
0
I need to find a controller card for an apple II 5.25 inch floppy drive, the 20 pin connector wont work on the 34 pin controller card i have
10
How can I boot or extract files from an IBM PS/1 with a DoubleSpace-compressed hard drive?