I would like to learn a bit about the first games that were ever played on a computer-like device.

It may be a digital computer, a console, an embedded chip or micro-controller or even something semi-mechanical.

The game itself has to be a software program and should not be hard-wired into the device. If the game program is fixed to a device, but existing in any kind of (at least once) writable memory (flash, [[E]E]PROM, ...) that would count as well.

Given your restrictions, the earliest computer game I can find is an implementation of checkers for the Pilot ACE, written in 1951 and debugged to the point of working in 1952.

Other candidates are checkers for the IBM 701 (1952 again), and OXO for the EDSAC, written in 1952 by Alexander Douglas as part of his thesis on human-computer interaction.

Anything earlier isn't likely to meet your "not hard-wired" requirement, since that's about the timeframe when computers were shifting from plugboard programming to stored-program soft-coding. Bertie the Brain (1950) and Nimrod (1951), for example, were both hard-wired. 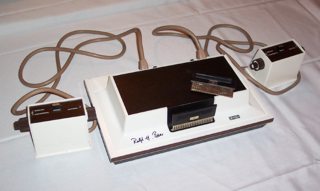 The Magnavox Odyssey and the whole idea of playing a video game on a television set was invented by a man named Ralph H Baer. Mr Baer first thought of the idea of building an " interactive game " displayed on a TV in 1951 when he worked with designing and building television sets at Loral Electronics, but no one at Loral showed any interest in the idea and so, Mr Bear put the idea to rest for 15 years. ... Then on January 27th 1972 the videogame industry was born. On that date Magnavox begun the production of the Odyssey ITL 200 and it was available for sale in May that same year.

There were at least 28 game cartridges of which 12 were shipped with the console.

Edit: as commented by @Jasen the cartridge were hard-wired (see the scheme).

If you're thinking of interactive realtime games using some kind of visual representation (so, this is essentially excluding turn-based games), it's probably Spacewar! for the DEC PDP-1 (MIT, Steve Russell et al., 1961/62).

See also "The Origin of Spacewar" by J.M. Graetz: http://www.masswerk.at/spacewar/SpacewarOrigin.html

8
Anybody restoring Adventure, an early interactive fiction game?
8
Can anyone help name this game?
18
First commercial DOS game?
8
Was there any indication that video game companies tried to circumvent Game Shark?
7
What was the world's first computer role-playing game?
45
Why are paddles called paddles?
25
Did the original MS-DOS Quake not have a menu item for freelook, and if so, why?
7
Fooling a DOS in game timer