A couple years ago the Toronto PET Users Group published an article (The Great Commodore/Microsoft Easter Egg War, on p. 7) about a newly discovered anti-Microsoft Easter Egg that Commodore hid in the ROM of the Commodore 64 and other machines. Some sample code for triggering the Easter Egg is provided and I have verified that it really does print an unflattering message about Bill Gates (at least in the VICE C64 emulator): 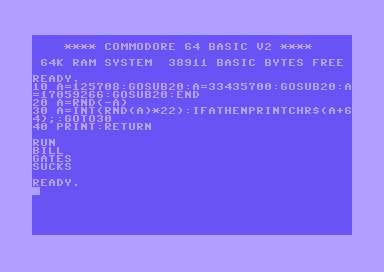 I'm the author of the TPUG article.

The "BILL GATES SUCKS" message isn't really an Easter egg; that was just a conceit of mine to make the article a bit more interesting and to turn it into a bit of a puzzle. Here's how it works and how it was created:

In any given infinite sequence random numbers, it's a mathematical certainty that a given subsequence of numbers will appear at some point. For example, if you repeatedly roll a normal six-sided die, then at some point you are bound to roll the sequence 6, 5, 4, 3, 2, 1—though it might take you hours of rolling before this happens. Similarly, if you had a hypothetical 26-sided die labelled with the letters of the alphabet, then repeatedly rolling it you would expect at some point to form the words "BILL", "GATES", and "SUCKS". Again, this might take you hours, days, or even months of continuous rolling.

The "random" number generator in the Commodore 64 and its brethren isn't truly random, but it's close enough that you can still expect to find arbitrary subsequences in its output. The only problem (or in my case, feature) with it is that, every time you turn on the machine, it always produces the same "random" sequence of floating-point numbers, all between 0 and 1. The random sequence can be changed only by seeding the generator with a numeric value. Each seed value causes the generator to produce a different random sequence.

With this in mind, I set out to find three seed values such that the first five or six numbers of their respective sequences, multiplied by 22 and rounded down to the nearest integer, correspond to the the alphabetic indices of the letters in the words BILL, GATES, and SUCKS, followed by a zero. For example, there is some seed value that makes the C64 random number generator start off with a sequence of floating-point numbers x1, x2, x3, x4, x5 such that ⌊22x1⌋ = 2, ⌊22x2⌋ = 9, ⌊22x3⌋ = 12, ⌊22x4⌋ = 12, and ⌊22x5⌋ = 0; note that B is the 2nd letter of the alphabet, I is the 9th, and L is the 12th. (I multiply by 22 because that's one more than the index of U, the alphabetically last letter in the message.)

These three seed values were found by writing a BASIC program that iterated through all possible integer seed values until it found one that generated the correct sequence:

To use it, first think of a short word you want to "encode", and change the value of f in line 0 to the index of the alphabetically last letter in the word plus one. Then run the program and type in the word. The program will then test each seed value, printing them out as it goes. It stops when it finds a seed that prints the string.

The program looks a bit odd, but that's because it's optimized for speed. (For instance, I prefer using variables and gotos to constants and for loops.) I compiled it using the Blitz! compiler and ran it using the VICE emulator in warp mode. This way seeds can be found within a few minutes or hours. Runtime on a real C64 would have been tens or hundreds of times longer.

Once I had the three seed values, it was a simple matter to write a short BASIC program that used them to seed the random number generator three times and print out the generated letters.

That's not a real easter egg. Someone just made an effort to find random seeds that produce the numbers to create the intended words. It would be an easter egg if the seed numbers were in some way related to CBM or Microsoft.

A=RND(-A) initializes the (pseudo) random generator with A, generates a random number and stores it in A.

The GOSUB20 subroutine then runs a random number series from the seed until RND(A) is too low (close to zero), using the random number as index for letters A-Z.

So, to generate any arbitrary string of reasonable length, all you need to do is to find the correct initialization value for the random generator, simply by trying all possible start values (brute force). See Psychonaut's excellent answer for details.

Not the answer you're looking for? Browse other questions tagged commodore-64 rom basic commodore or ask your own question.

17
How did the Epyx Fast Load cart work with a Commdore 64?
30
Did the LET statement actually do anything in 8-bit Microsoft BASICs?
27
How did the "rub joystick port to continue" in the Creatures 2 infinite lives cheat work?
9
Did Microsoft BASIC ever use Z80 only instructions?
22
How do arcade ROMs work
4
How did "RAM" cartridges for the C64 work?
19
How did integer multiplication work in 8-bit BASIC without CPU support
5
How to get GOTEK to work with CDTV?
24
How did Commodore drives produce program listings from disk directories?
24
How did the C64 lockup bug and its workarounds work?