What is the history of DE-9 joystick ports?

The Commodore 64 and the Atari 2600 had compatible joystick ports. Commodore, Atari, and third-party companies like Wico made joysticks supporting that standard.

Did this standard have a name? Where did it originate?

Did this standard have a name?

a.1) There is no neutral standard for joystick ports, hence no standard name. When speaking manufacturer/machine needs to be named.

a.2) There is a standard for the connector used by most 8 Bit machines, as their DE9 is part of the series Cannon developed in the 50s. Here D is the general series denominator (said to be due the shape, but I doubt that, as it perfectly fits Cannons order number scheme), E defines the shell size and is just a counting (A, B, C, ...), as it's been the 5th defined size. Last, there's the number of pins. For the most basic pinouts there's a fixed relation. A DA is always 15, a DB always 25 and a DE always 9. Except when there are special layouts, either combining various connector types, like analogue - a DB13W3 used in workstations had 13 standard pins and 3 coax connections. Then there is the high density series. A DE-15, the well beloved VGA connector is an E shell with 3 rows of 5 pins each. So the combination of shell and pin count is usually enough to describe most connectors.

Last but not least a P for plug or S for socket could be added. In the case of joysticks it's important to remember that the console side houses the plug variant. Mnemonic: Plug == Pins. Later on, some used M(ale) and F(emale).

So the original canon order number for the connector used at the end of a joystick cable is a DE9S and DE9P for the console (Well, plus a bunch of suffixes for the cable/board mounting variations and housings :))

Where did it originate?

b) Most likely with the Fairchild Channel F. The Channel F was not only one of the first successful multi game console (Magnavox Odyssey beeing the first), it also came, unlike others, with detachable controllers (Odyssey again being there before), but unlike the Odyssey, the Channel F used DE9 standard connectors. The Channel F debuted about a year before the VCS, so it's safe to assume that Atari had a peek here. Fairchild also introduced the habit of using the socket (female) part on the mobile. Then again, Atari used a different pinout.

With the home computers (400/800) introduced two years later, Atari kept the pinout. By now the add-on industry had joined and it was just natural for Commodore to use the DE9 for their upcoming home computer, the VIC-20, another two years later. While there where other formats, even open ones, the mainstream was settled for the Atari based standard. It did not make any sense to derive something different, as no-one could beat the supply already offered. TI did use a different pinout to support two joysticks over only one connector, just to make the Atari-TI adaptor one of the most sold items for this machine :))

Over the years some variations occurred, either to create system lock in, or for new features (mouse etc), creating different pinouts and/or protocols. For example Amstrad dropped the paddles to add a scheme to support two joysticks with two fire buttons via a single DE9, much like the TI, but of course, different.

All are just switches.

Directions are switches connecting to ground when pressed. Paddles are 470k connected to +5V. Lightpen/Gun used Trigger as signal and North as Button.

The DE-9 joystick port is close to a standard D-sub connector (note that it uses the "E" shell and not the much larger "B" shell from the DB-25 serial or parallel port connectors). 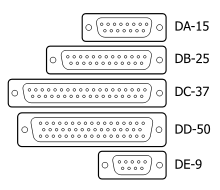 For joysticks, it was first used an the Atari 2600 VCS, went on to their early 8-bit machines and was then adopted by Commodore.

From what I can see on the Wikipedia page about the Atari Joystick Port, it seems that the whole "cross platform" standard of the DE-9 joystick started with the VIC-20 (1981) and was followed by the C64 (1983) and Amiga (1985) computers as full implementations. There were others which were mostly compatible such as the ColecoVision (1982) and Sega Master System (1986?), but perhaps didn't work with every kind of peripheral.

I seem to recall from reading over the years that Commodore intentionally made the VIC-20 joystick port compatible to ride some of the popularity of the Atari 2600. Evidence of this can be seen in that original VIC-20 joysticks produced by Commodore even looked like the CX40:

As to why it was skipped by other companies later on (most notably Nintendo's NES) isn't clear, but I would suspect it had to do with the fact that since most CX40-compatible hardware on the market only had 1 trigger/fire button. Nintendo's NES had 2 triggers (A/B) on its first controllers in addition to dedicated Start/Pause buttons, which obviously wouldn't work if someone wanted to use their CX40 on the NES. Though you could make a controller that combined combinations of the digital inputs for additional functions (e.g. the Atari Keyboard controller), I suspect platform and revenue control/protection was a strong driver as well!

Not the answer you're looking for? Browse other questions tagged commodore-64 atari-2600 joystick or ask your own question.

11
Testing/using a joystick in AppleSoft?
17
How to create a switchless multi-system 2 button Atari joystick?
1
New joystick (or build one) for Atari 800
44
Why are C64 games inconsistent with which joystick port they use?
10
Did any devices use the Commodore 64 joystick ports as outputs or two-way communications ports?
8
Are game port joystick button circuits more than plain switches? Is this one just faulty?
4
Joystick adapter from 9-pin to USB
15
Who owned the rights to the TIA chip?