What is the relative code density of 8-bit microprocessors?

When RAM is at a premium, as it was in the old days, a greater code density of an instruction set can be a substantial advantage.

(Click saver: Code density refers loosely to how many microprocessor instructions it takes to perform a requested action, and how much space each instruction takes up.)

Further, it is possible to increase code density by creating a more efficient virtual machine to execute bytecode, threaded code (not to be confused with modern-day threads), or a variety of other similar techniques. All of these tricks are effectively instruction sets in their own right.

But you're not really asking about the theory, but hard data. The paper that immediately came to mind was Code Density Concerns for New Architectures (Citation, Presentation, Paper). It is more biased towards modern architectures, but it does include the Z80 and 6502 in (some of) its results.

To crudely summarise the paper's results: Modern x86 tends to be the most-dense code; CISC, ARM Thumb, Z80 and the embedded-optimised CPUs are a close second; RISC and 6502 are a respectable third (many don't think of the 6502 as being RISCy!), and Itanium and Alpha come in a poor fourth. If you ignore the Itanium outlier, there's only about a factor of 1.5 difference between all the CPUs tested.

So if you're looking for a (popular) retro CPU with the absolute-highest code density, you want the Z80.

I was going through the literature produced by Zilog in the 1980s and noticed that in their "Microprocessor Applications Reference Book, Volume 2" (1983), nicely scanned for us by BitSavers, they attempted to compare Z80 vs 6502 (see Section 2 "Z80 CPU vs 6502 CPU. Benchmark report"). Given that this comparison was produced by one of the direct competitors, you can of course take their findings with a large pinch of salt. However, their comparisons do not seem overly unbalanced, and my only substantial complaint is to do with the fact that they included into their battery of tests several tasks where Z80 would have a substantial edge (such as data copying and linear data searching routines, both of which can be done on Z80 using designated commands). All their programs are included with the report, so you can take a closer look at the codes and conclude for yourself, how reasonable their codes were. 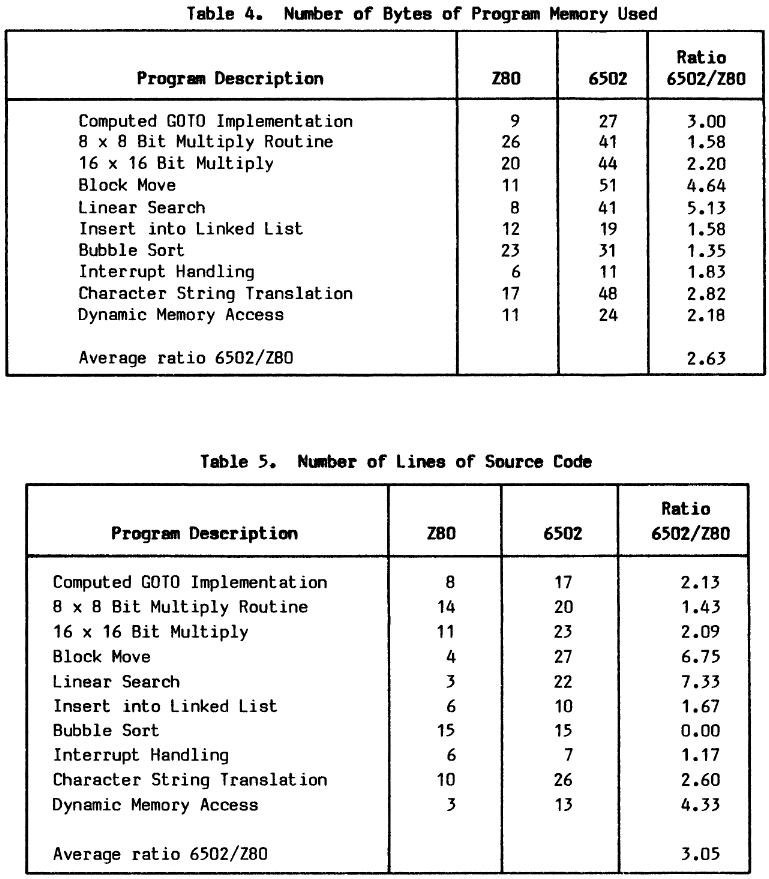 I'd say that the reported factor of 2.5-3 lower code density on 6502 is mostly due to trying to compare averages, that are, as usual for averages, overly biased by the outliers (such as the example of linear string searching). However, if instead of computing average ratios, we were to compute median ratios, we will get a more reasonable estimate that Z80 code is about twice as dense as 6502 code, both in terms of the number of lines of code and in terms the number of bytes it occupies.

Not the answer you're looking for? Browse other questions tagged z80 6502 8080 instruction-set or ask your own question.

10
Intel 8080 - Behaviour of the carry bit when comparing a value with 0
37
Why does the 6502 have the BIT instruction?
20
Bit one of the Intel 8080's Flags register
42
What happened to the SEV instruction on the 6502?
22
Why are branches relative in many 8-bit CPUs?
13
Has there ever been a instruction set architecture that did not require instruction decoding at all?
20
Why did the Z80 with 4-bit ALU out-perform the fully 8-bit Intel 8080?
50
What languages are better fit for generating efficient code for 8-bit CPU's than C?
12
Ratio of code density between 8080 and Z80
5
What bit do the BBRn/BBSn opcodes check?