Looking through the LO (localisation) disk for Workbench 3.1, I see that the language files are binary. I'd like to create a Gaeilge (Irish) localisation file. How is this done on Amiga? 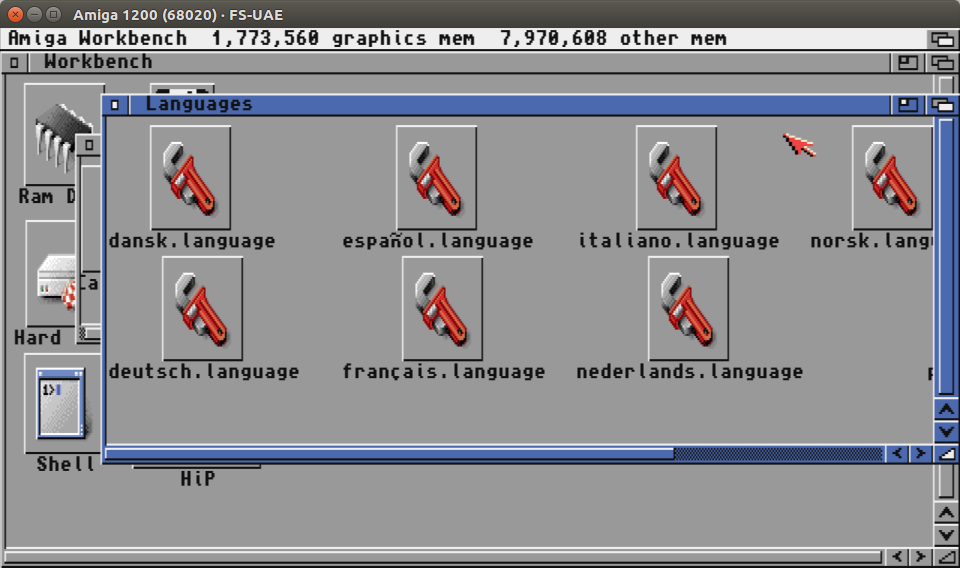 Update: Following Raffzahn's advice, LocaleTest provides useful information on the current/active locale. I'm happy to see there are only 51 strings used in Workbench - the translation aspect should be easy :) Here is LocaleTest running on my setup: http://www.dailymotion.com/video/x5wzhyj

The Lithuanian language may be complete, but is also binary so I don't know what I can learn from it. There are also some irregularities delcared; "usefull files (hacks) to make Amiga OS think that Lithuanian language is your prefered language. Those files are hack because I don't know how to build countries file. Sorry, but I don't have time to search internet for these documents."

The link at http://wiki.amigaos.net/wiki/Locale_Library clarifies some concepts but is ultimately aimed at application developers and doesn't show how to create a locale/catalog itself.

The .language file contains the "language driver", which is basically an Amiga system library (i.e. just like a .library file) that contains a bunch of localization-related functions that mostly implement the various string conversion, comparison and character class testing functions defined in locale.library.

Based on the documentation and the example language drivers found in the AmigaOS4 SDK (under Documentation/Localization and Examples/Locale, found inside base.lha in the SDK archive), it seems that the full list of functions that a language driver may provide is:

Not all of these functions need to be actually provided by the language driver. Instead, the GetDriverInfo function is supposed to return a bitmap indicating which functions the driver actually implements. For the functions that aren't implemented by the language driver, the OS instead falls back to the corresponding functions in the charset driver (defined in a .charset file, which is another similar system library) or to built-in routines in locale.library

For a complete localization, you'll also need a .country file. Unlike the language and charset drivers, the .country file is not a system library, but just a simple IFF data file containing a list of strings related to currency, date/time etc. formatting. The .country files are, in fact, very much like the .catalog files used for application localization, except that they use different IFF form and chunk names.

As far as I remember the .language files are a variation of .catalog files. They are 'paired' with .country files for things like default date order, etc. I do not remember any special tool for creation, but then again, it's been a few years. What I remember is a program called LocalTest listing all structures and settings of .language files. A quick search turned it up on Aminet, including all sources, so there is maybe a starting point to dig.

Looking at an existing localization might also help; maybe use this really complete Lithuanian localization.

Looking at Amiga localization in general might also be helpful, see the Locale Library page on AmigaOS. Of course, these pages focus on AmigaOS 4.0 and up.

And then there was the Amiga Translators Organization. A gathering of people on the net involved in (voluntary or professional) translation of Amiga product. I couldn't find an actual pointer, but this old page might be a first start for your search.

Not the answer you're looking for? Browse other questions tagged amiga or ask your own question.

15
What does the H protection bit mean under classic AmigaOS?
12
What was the A1200 Flash ROM support meant for?
13
What are all the fixed addresses of AmigaOS?
11
Amiga Video Toaster support
9
Version Control for AmigaOS 3.1
6
Can't type angle bracket characters in AmigaOS 4.1 on WinUAE
12
Protected/virtual memory support in classic AmigaOS
12
How are Amiga Kickstart Relocation Files (.RTB) created?
13
Is there a seamless, Wine-like AmigaOS emulator for Linux, specifically for text-based programs?
4
How does stack size affect functioning of AmigaOS and programs?