How powerful was Knuth’s computer?

The Art of Computer Programming, volumes 1–3, was written in the late 1960s, with vol 3 finalized in Sept 1972 after a delay of “almost 3 years” because of rapid development of the subject matter.

I recall a statement (though I can’t find the actual page) where Knuth says 10! (About 3.6 million) separates the size of a problem that can be solved by brute force from those where such is impractical.

Now from Moore's Law, doubling every 18 months, I would estimate a modern computer would be faster by a factor of a billion. But, that seems to be an overestimate based on my benchmarks and surmising that it would have taken Knuth a matter of days to run.

Now Moore's law applies to equal cost, so comparing a major industrial machine against a desktop PC brings them closer together. Moore’s Law might not have started yet. Scale factors might be more complex— e.g. was I wasting power because I could have been manipulating 64-bit quantities and the problem only used 8?

So I wonder, just what were the performance characteristics of the kind of machine Knuth was familiar with at Princeton in the mid to late 1960s? 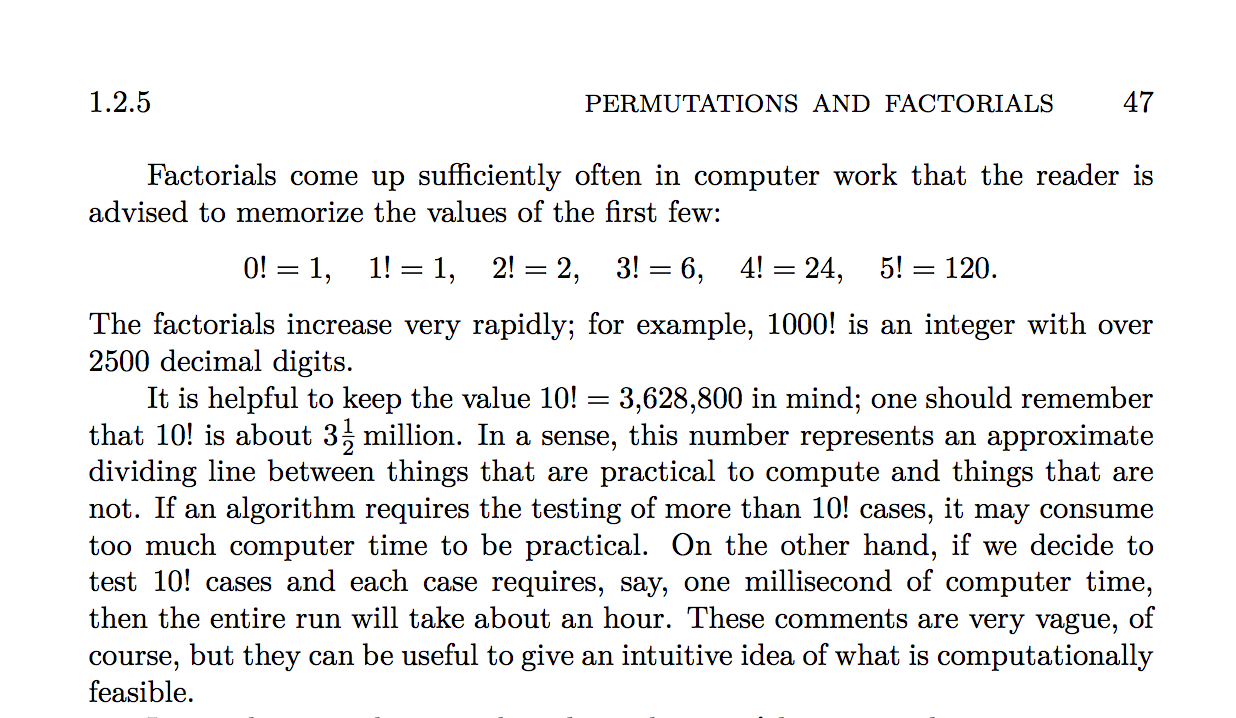 The calculation says that if checking each case takes about a millisecond, then 10! is about the number of cases you can check in an hour: this calculation is as true today as it was in 1968 (when Vol 1 was first published). What has changed is that today you can check a lot more in a millisecond than you could then: you can solve more difficult problems.

We actually know a fair bit about the kind of computers Knuth cut his teeth on:

In the mid-1960's, an IBM 360/6x mainframe cost a few million (in USD at that time, adjusted for inflation it would be more) and could do on the order of a megaflop, maybe half that. Today, a Raspberry Pi Zero W cost about $10, and can easily do over a gigaflop, maybe two. But the price/performance of brute force numerical stuff on a contemporary GPU might be even better (near 100 teraflops for under a $1000). For some types of computational problems, one can rent multiples of brute-force crunching capability from the "cloud", and not even incur sunk hardware costs.

Knuth was at CalTech before moving to Stanford in 1968 and continued consulting with Burroughs until that time. As ShreevatsaR mentions, he worked on an Algol-58 compiler for the Burroughs 205 (1954), which was a decimal, drum-memory, vacuum tube system with a 143KHz clock rate, 11-digit words (10 plus sign), and sequential, digit-by-digit arithmetic. Average access time on the main portion of the memory drum was 8.4ms, but there was a small portion of the drum that provided 10x faster access.

Execution of an integer or floating-point add (including fetch) would typically take 2.5ms if executed from the fast portion of the drum and 18ms if from the main portion. [private correspondence with Prof. Knuth and Tom Sawyer]

Knuth also worked during this time on the Burroughs B5000/B5500. This ran at 1MHz and used a 48-bit binary word with a 4-6µs memory access time. It used a unified integer/floating numeric format where integers were considered specially-normalized floating-point numbers. Add times are difficult to generalize due to stack adjustment and variance in normalization, but it had a 1-clock parallel adder, so my guess is that most adds took about 10µs. B5281 Processor Training Manual, B5000 Processor Flow Charts

The answer can perhaps be inferred from this page with results from the Whetstone benchmarks.

I selected the B5500 since Knuth is known to have been associated with Burroughs at that time (see other answers), and the HP system since it was the most recent Intel-based computer I could see at a quick glance.

The Whetstone benchmark is explained at the same site, in case you're not familiar with it.