A game where you program a robot to fulfill missions

I'm looking for a game. Unfortunately there're only few things I remember:

I know this is very little info; perhaps someone can recall it.

It sounds like you are probably referring to the 1984 release of Chipwits. It was originally released for the Macintosh, and was ported to the Apple ][ and Commodore 64.

The screenshot below is from the version for the C64.

Interestingly, a modern version of the game exists too. 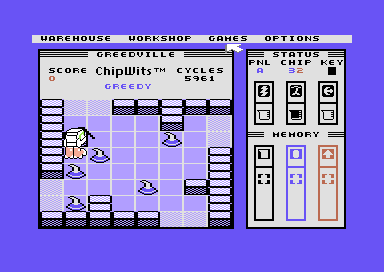 Was it Robot Odyssey? This fulfills most of the criteria in your question except that Robot Odyssey was not isometric - or at least I have never seen an isometric version. It required you to program a robot in advance to solve room challenges and it was an 8-bit game in the 8-bit era.

I would guess you mean Paradroid. This game was originally written for the Commodore C64 and published through Hewson Consultants. Here's a video.

The game was (at least on the C64) not isometric, but rather had a somewhat 3D-enhanced birds-eye view and had you program robots to regain control over an alien-infected spaceship.

The game was ported to a number of other micros, like the Amiga and the Atari ST.

Wikipedia has an article on the game, and the game itself was so popular that there even is a relatively modern, free 3D enhanced version today entirely done by fans: Freedroid.

I know it's a bit late but I was after a very similar game and just came across it again.

I'd recommend you check it out but you build robots from parts and send them out to explore. Choosing everything from their mode of movement to their weapons and sensors.

Not the answer you're looking for? Browse other questions tagged commodore-64 identify-this-game cpc or ask your own question.

37
Where and what was Haunt.bat? A game pre-loaded on a c1992 PC
5
1980's PC educational game where you build robots
8
Submarine diver game where you had to collect fish and other things for your aquarium
6
Need help identifying math game where equations let you move from room to room?
6
Searching for Swedish Mac game from the early 1990's where you try to sneak out of the house
5
A game where you could sell body parts for cash
10
What was that old FPS game where you shot rats in a sewer?