When I was working for a foundry consultancy, we did the following

There were a number of programs that used the 6502 in the 1541 as a coprocessor.

An obvious application was for calculating fractals, because that doesn't need a lot of RAM. An example is the Mandelbrot Construction Set (German article).

And of course all the Turbo Loaders had a part that needed to run on the 1541, but these were not really obscure.

And now this: disk drive outputs the video signal through the serial bus connector! 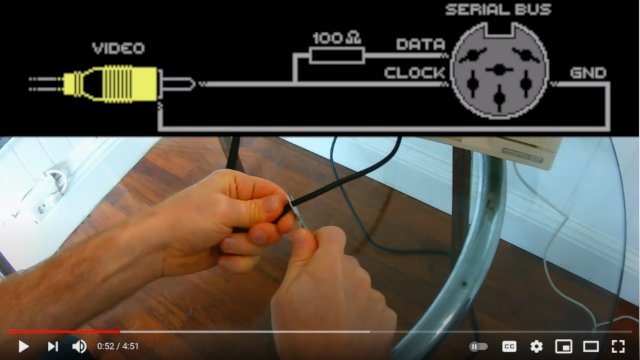 Technical details are described on the author's website: http://www.quiss.org/freespin/

Every single raster line, we have generate sync pulse by pulling both DATA and CLK to ground for 5 - 8 μs. And of course, we have to switch back and fro between black and white. Since the 6502 runs at 1Mhz, a single CPU cycle is already 8 horizontal pixels. But writing 1800 takes 4 cycles, so every switch between white and black is always at least 32 pixels wide. This is perhaps the biggest restriction of 1541tros, and dictated most of the effects. (Oldschool effects, like rasterbars, chessboards etc. tend to work nicely)

Reposting slightly, but this (German-language) page provides software for networking C64s via the serial bus, with the simplest intended power-on state being two C64s connected to the two inputs of a 1541, having one set to ignore the drive while the other loads, then reversing that, then having them talk to each other and to the drive through negotiation.

I think arbitration is decentralised for a flexible topology, so the mildly askew use of the drive is as a networking hub. One can imagine it becoming a more powerful server on such a network, e.g. being responsible for authoritative state in a multiplayer game, but I don't think the page goes that far.

Not the answer you're looking for? Browse other questions tagged commodore-64 disk-drive commodore-pet or ask your own question.

4
Did people back then build powerful computers out of multiple smaller machines?
12
How do you send code to a Commodore disk drive and run it?