What was the largest cartridge produced, or possible, for any 8-bit home computer?

That is, the later 8 or 16-bit console cartridges could be surprisingly large, up to several megabytes in some cases, but as I understand it, the Commodore 64 cartridges were limited to 16K of ROM, and I don't remember other home computers going much beyond that. Were there any that did?

Simple Answer: Unlimited and Many

Ofc, every system can only reserve a certain amount of real address space for cartridges, but then there is Bank Switching. Just take the original Atari 2600. Address space for ROM was 4 KiB, and many early games only used 2 KiB ROMs. But already in 1982 Burger Time came in a cartridge with 16 KiB ROM and some sort of bank switching. That's already more than the whole address space of the 6507 (8 KiB). Later even 32 and 64 KiB cartridges have been made.

After all it's the same as with every memory expansion. The Apple II only offered 12 KiB of deselectable ROM address space for expansion, but already Woz' language card filled these 12 KiB address range with 16 KiB of RAM. Saturn & Co later on squeezed several Megabytes in.

These are the same techniques used in later games to get squeeze large amounts of game data into a linited address space. Usually the logic to enable the switching was part of the cartridge. As Chenmunka already mentioned, some systems, like the BBC, Memotech MTX, Exidy Sorcerer and other 8 bit machines already included mechanics, or at least protocols to handle expansions larger than the provided address space (window) in their basic design. Many of them enabeling RAM or ROM in the megabyte range.

As Raffzahn points out, because memory can be bank-switched in the address space available to cartridges, the maximum size is limited only by the intersection between the technology available and how expensive and physically large you're willing to make the cartridge, and how you're willing to power it.

Nonetheless, you're probably thinking of cartridges of standard size that use no more power than can be provided by the cartridge port. As you point out, by the later age of 16-bit game systems, these had progressed into the megabyte range, but this was certainly possible on virtually any earlier system, within the limits of the memory chips available.

Since you mention the Commodore 64, I will give you here the example of the MultiMAX cartridge. This is designed for the the MAX Machine, a predecessor to the C64 that (RAM size aside) is very similar to the C64, and this cartridge can indeed be played on the C64 as well. The MultiMAX contains the contents of every cartridge ever released by Commodore for the MAX: 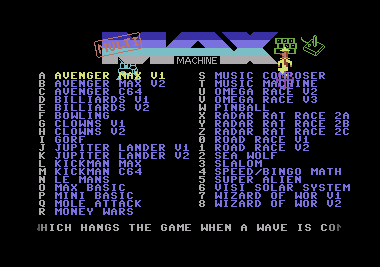 (The MAX was clearly not too successful a computer; in fact there's plenty of unused space left in the cartridge.)

The MultiMAX contains a one megabyte EPROM and a few other simple chips. Though the EPROM, an STM Microelectronics MC27C801, dates from 2006, everything else in the cartridge was available back in 1982 when the MAX was first released. By 1985 various vendors were presenting 1 Mbit (128 KB) EPROMs, and you probably could have squeezed four of those into a cartridge for a half-megabyte capacity. In fact, that alone would have held the entire contents of the MultiMAX.

If you examine the cartridges produced during the active life of 8-bit computers, then first of all you need to look at the Japanese and MSX. One-, two-, three-megabit cartridges with mappers were produced in rather large editions - in general, the picture was similar to the one that Sega had for the Master System. Megabit ROM Cartridges

This isn't an answer to the question, but an interesting tangent. I thought it was worth mentioning on while discussing the topic, though.

As Raffzahn points out, cartridges didn't have to just be static ROMs (or EPROMs as many of them actually contained), but could also have active circuitry that enabled bank switching or other features. In many home computers, the cartridge interface was just an extension of the system bus, so the cartridges could actual add any additional hardware to the system that would sit inside the required form factor.

An interesting example of this was the Video Chess cartridge for the TI-99/4 and /4A computers. These computers by default had 16.25KB of RAM (16K of slow DRAM and 256 bytes of faster SRAM used by the processor as a scratchpad due to its lack of useful registers). The developer of Video Chess decided that this wasn't enough to get the computer to play a good game of chess, and therefore used the cartridge to fill the entire memory space of the processor (other than the parts that were needed for ROMs) with additional RAM, leaving the system with 42KB of RAM, according to the specs here (although I'm a little dubious, because those specs suggest the total address space used exceeds the processor's address space, but only by a couple of KB... I have a suspicion that something has been reported incorrectly, somewhere), which was basically an enormous amount of memory for a home computer in 1979.

The largest ROM space the Atari 2600 could address was 4K. But a number of bank switching schemes (and some fiendishly clever ways to do it cheaply!), allowed carts up to 32K. Although really there's no limit, you can always amend the bankswitching to allow more.

This applies to all consoles, and computers. With bankswitching, possible with all ROM-based consoles, there's no upper limit. The NES called bankswitching chips "mappers", since they altered the memory map, and perhaps because they wanted to give a nicer name to an ugly technique!

I think it's a shame the Spectrums with 128K didn't allow a better graphics mode, with less colour-clash, or even none. Problem would be, you'd need a game to come in a version with extra graphics for that version. Still, the extra RAM would make up for that. They could also have added a palette, and still kept compatibility. The Amstrad CPC had the same Z80 CPU as the Speccy and had much nicer graphics, so it was possible. Maybe a faster CPU, too, a Z80H could run at double the clock speed.

But anyway it didn't happen, and there's no point producing one now since the software has all already been written. Nobody would write much for an enhanced Speccy, they'd get even less people playing it, if the original machine couldn't do it.

Not the answer you're looking for? Browse other questions tagged history rom game-cartridge or ask your own question.

12
Largest ratio between base and maximum RAM

6
Homemade ROM cartridge for Thomson TO7/70 home computer
4
Manufacturing cost breakdown for a 16-bit computer
5
Is my Japanese Pokemon Red cart fake or damaged?
8
Are there any open-source C64 DOS wedges and fast loaders?
32
Did computer games for Commodore 64 really take “25 minutes” to load “if everything went alright”?
23
Why did 8-bit Basic use 40-bit floating point?
7
Did any SNES games use the fast ROM?