Was Family BASIC for the NES/Famicom powerful enough to create full games and applications?

I can't seem to find much info about Family BASIC anywhere on the internet. So I have a 2 simple questions. 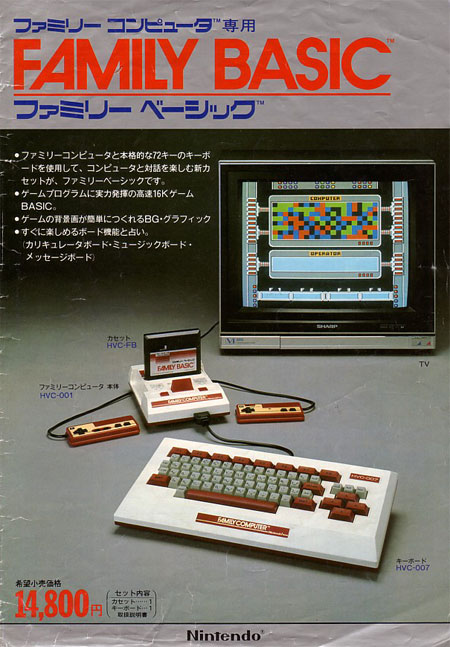 1. Was Family BASIC powerful enough to create full programs or was it just made as a toy for people interested in programming?

It depends on your defintion of 'powerfull'. The Famicom, aka NES, was a 1.8 MHz 6502 machine, thus it got processing power superiour to a C64 or VIC20. It's graphics system was also more capable than what a C64 or similar machines got.

Family BASIC on the other hand was a special developed, MS alike dialect. Somewhat based on the BASIC, also provided by Hudson Soft, for the Sharp MZ80 (and follow up) series, but a seperate development. As a speciality it got a GAME BASIC mode. Basicly it switched all variable handling to Integer to improve performance considerable. Much like the Integer BASIC Woz did out of the same reasoning for the Apple II.

And like the TI 99/4s Extended BASIC it featured many special functions to utilize the hardware to a dregree unknown in other implementations. Next to all features of the Hardware could be accessed from BASIC. The only real restriction was the limited RAM size. 2 KiB for the original version and 4 KiB for Family BASIC V3. Due the great integration this was less lmiting than it seams.

Maybe take a look at this youtube video to get an idea how able Hudson Softs GAME BASIC was. It shows several games writen in Family BASIC. The first (Mario Jump) is an example taken from the Family BASIC manual.

So I'd say more than (almost) any other 8 Bit BASIC machine (back then).

2. I know Assembly language was used exclusively to create games for the NES/Famicom. Would you have a lot more limitations with BASIC compared to Assembly.

Well, is eating noodles with chopsticks more limitating than using a fork?

As usual it depends. If you're in doubt about the underlaying principles, RetroComputing might not be the right place to ask. The question about a comparsion between BASIC and Assembler, even if it's a specific BASIC, is way to broad to be discussed here. Maybe try to ask this on more general, programming orientated, subsites of StackExchange.

From the token list at atkinsoft, there were certainly enough keywords from BASIC to suggest that Family BASIC was Turing-complete, and thus could be used for "serious" programming.

(ref: Wikipedia:Nintendo Entertainment System) Since the CPU was a 6502, the same as used in e.g., early Apple and Commodore home computers, it is clear that the only limitation on "serious" programming would be available resources (such as RAM).

Mendel Palace, GameFreak's first game, was written in family basic, so it is powerful enough to run a real-time puzzler. I read it in a book.

Stumbled into this question while searching for games for Family Basic. While I have no idea what kind of power the systems of the time had, I can tell you this, the original manual for Family Basic V2 (specifically Game Basic) explicitly mentions that you can write directly to any memory address of the console using the POKE function and also directly call machine code subroutines with the CALL function, which I've been able to successfully leverage to write my own 6502 machine code subroutines while playing around in the emulator. The manual also describes the memory structure of the console.

If you want to test this, just type "CALL &8000" into Family Basic. &8000 is the starting address of the ROM, and after pressing Enter, you should find yourself staring at the starting screen of Family Basic. In V2, this would be the selection menu between BG GRAPHIC and BASIC, and V3 will entertain you by printing "BASIC HOT START" instead of the default welcome message.

Kirby's dream land was made entirely in family basic on a twin famicom with a track ball.... does that answer your question?

edit: it wasn't family basic, but a very similar program.

50
What was Nintendo's Software Development Environment for NES Games?
18
What are the differences between the Japanese Famicom and American NES?
14
Is it possible to play Famicom games on the NES and utilize the extra sound channels?
22
Was the design of MS-BASIC for 6502 based on MS-BASIC for 8080?
7
What was the dithering algorithm used in Sierra and LucasArts games?
14
Did Nintendo change its mind about 68000 SNES?
11
What was the difference between a Games Console and a Home Computer?
11
Why was SLI for gaming introduced and supported in the first place?