The Apple 2's disk drive controller and 5¼" floppy disks have the following metrics:

However, since the radius (and therefore the circumference) of the outermost and innermost track differ, shouldn't track 0 be able to hold more bits then track 39? The circumference (C = 2 * π * r) for tracks:

shows track 0 has a whole lot more "space" then track 39.

apple-ii floppy-disk floppy-drive
Share
Improve this question
edited May 30, 2020 at 7:19

The Disk II uses Constant Angular Velocity standardized by Shugart at 300 RPM. The earlier 8-inch drives were 360 RPM, and since the physical media was the same it's likely that 300 RPM was chosen to increase data density on the smaller disks, and perhaps reduce controller throughput for use on early computers that were less powerful and cheaper. (But I can't find a reference for this.)

Disk II spindle speed can be manually adjusted on Apple's analog controller board between approximately 190 and 320 RPM. Slower speed results in higher data density, but this will be limited by physical parameters such as magnetic (iron oxide) particle density and read/write head characteristics - e.g. weaker magnetically induced current in the read head at low speed.

Track capacity is affected by its contents: since MFM clock pulses aren't used, the data written must be carefully chosen in order to synchronize with and be reliably read by the Disk II controller. This includes restrictions on consecutive zeros, and nibbles with trailing zeroes called self-sync bytes.

However in this experiment I didn't use sync bytes, instead relying on the controller sequencer's natural tendency to quickly sync to certain patterns. A simple nibble count measures the maximum theoretical capacity of the track, ignoring the required overheads of practical data storage. Here is the nibble count code:

Assembled at $8000, there are some defaults that can be optionally adjusted:

The routine assumes the drive is on and up-to-speed, and that the head is already positioned on the desired track. The defaults as given will write $3000 nibbles of "D5AA" followed by one "FF" mark to the selected drive in slot 5. The track will then be read into memory at $2000-$7FFF and the data scanned for the mark value. Mark locations will be printed in normal text, and length between marks in inverse.

Here is an image of a sample run which uses boot 0 to seek track 0 of drive 1 in slot 6 in AppleWin: 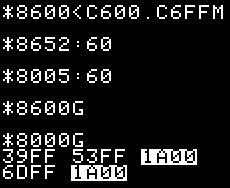 Adjusting a real drive's speed (measured with Copy II Plus 8.4) I obtained the following results:

At 270ms and above the sequencer would not auto-sync to simple nibble patterns, though Copy II Plus could still measure drive speed. Its exclusive use of selected sync byte values would likely explain this.

Tracks written at one speed can be read at another speed that is +/-10ms. I didn't test how far this tolerance extends. Roland Gustafsson (who wrote the copy protection for many Brøderbund titles) says he tried slowing the drive speed but "never used that technique due to compatibility problems. In fact, [he] wrote a speed calibrator that was used at Broderbund to keep the disk drives in spec".

When speculating about an alternative Constant Linear Velocity capacity you would need to specify the exact hardware being used, since that big a change would probably extend from the controlling software to the magnetic media - and everything in between. There is a good list of existing floppy disk formats on Wikipedia.

Apple ][ used an ordinary disk transport and fixed bit-rate in the controller. In order to fit more bits on the outer track it would need to vary the spin rate of the disk so that the controller had time to put the extra bits on.

Early Apple Macintosh's used a custom disk transport with variable spin rate, so it could fit more data on the outer tracks of the disk, getting 800K on a "720K" (3.5" DSDD) floppy.

Although the Apple II could only write at 4 cycles per bit, it can read faster: if you slow the drive down, you can write more densely.

The Disk II system uses a Shugart SA400 drive which rotates at a fixed rate of 300 RPM, so it is constant angular velocity. (Actually, it's the SA400 drive mechanism with a custom analog electronics board; the drive without Shugart's electronics is sometimes called the SA390. But that makes no difference for this question.)

Beneath Apple DOS on page 3-7 briefly mentions 50,000 bits but doesn't provide any details oh this number was calculated.

That number comes from either a simple calculation based on the IBM-standard FM and MFM data rates for floppy drives or just directly from the Shugart specification for the SA400 drive.

Before going further we need to discuss these so-called "nybbles."

The Disk II controller always reads an 8-bit chunk of data every 32 cycles; I call this a "raw byte." For various reasons, there are only 66 different 8-bit sequences that the disk controller can read while maintaining synchronization (or fewer for the older controller PROMs and DOS ≤3.2), which is why we need to encode our data.

(If you want more detail, this answer goes a bit deeper into the reasons for this. The truly gory details are in Chapter 9 of Jim Sather's Understanding the Apple II; see page 9-27 for a list of the raw byte values that can be used while maintaining sync.)

Because Woz originally used an FM encoding to store 4 bits of data in every raw byte written to the diskette, he originally called these post-encoding raw bytes, "nybbles." Before the first Apple II DOS release the encoding system for data bytes was changed to store 5 bits of data in every raw byte (and eventually 6 bits, with DOS 3.3 and a controller PROM change), but the name appears to have stuck. However, to avoid confusion with the other standard terminology of a "nibble"-with-an-"i" as a 4-bit chunk of data, I will henceforth refer to the 8-bit chunks stored on the diskette and read by the controller as "raw bytes."

Bits and Raw Bytes per Track

No, it's 4 μs for a single bit. The figure in the fourth printing is incorrect; this was fixed in the fifth printing. More details are given in this answer.

But even that's not quite correct: it's really 4 clock cycles per bit. Since the Apple II clock is 1.023 MHz, that's 3.91 μs per bit, which gives us a track capacity at 300 RPM of 51,150 bits, or 6393 raw bytes. We can do the calculations for other rotational speeds as well, which I have done in the following table. I've chosen the same speed values as Nick Westgate did in his answer; you'll note how close my calculated values are to his experimentally determined values in the raw exp column.

I've not seen any documents that discuss the acceptable speed ranges for Disk II drives, but I can try a rough calculation. The read output signal for a 1 bit from the drive is a 1 μs pulse that must be detected within 4 μs of the previous bit (see page 9-29 of Understanding the Apple II for details, and correct me if I'm wrong).

The drive will fully resync at the starting 1 bit of a raw byte (see the discussion of byte framing in, again, this answer), so that that means that the drive can't slow more than about half a microsecond over the course of 8 bits, or about 1.5%.

Since we've done all this, it's interesting and easy enough to calculate the maximum number of (encoded) data bytes we can store on a track. If we decide to go with a full-track format (one huge sector per track) we need just 50 bits for synchronization (details again in this question and answer) and the rest can be data. At 50383 bits per track we have 50333 remaining after the sync bits, all of which we can use to store GCR 6+2 encoded data:

Multiply by 35 tracks and this would give us a total capacity of 161.25 KB/disk. Round down just a bit for safety and it seems that 160 KB is the maximum you could ever pack on to an Apple II floppy.

Not the answer you're looking for? Browse other questions tagged apple-ii floppy-disk floppy-drive or ask your own question.

13
Did the PAL version of the Apple II use a different clock frequency?
6
Why does _Beneath Apple DOS_ show FM encoding rather than GCR?

11
How does a HD floppy drive react to an ED disk?
23
Why not constant linear velocity floppies?
10
What are the most common Apple II disk image formats and what hardware disk drive emulators can use them?
5
Mismatched floppy disk/drive reading and writing, what should one keep in mind?
6
Why does _Beneath Apple DOS_ show FM encoding rather than GCR?
4
What did "double track" mean in relation to floppy disks?
3
Converting Apple II ProDOS blocks to DOS tracks and sectors
3
Did any 5.25" floppy drives not based on the Apple Disk II offer quarter-track control
3
What do abnormal sounds or vibrations of a spinning floppy disk inside a floppy drive mean?