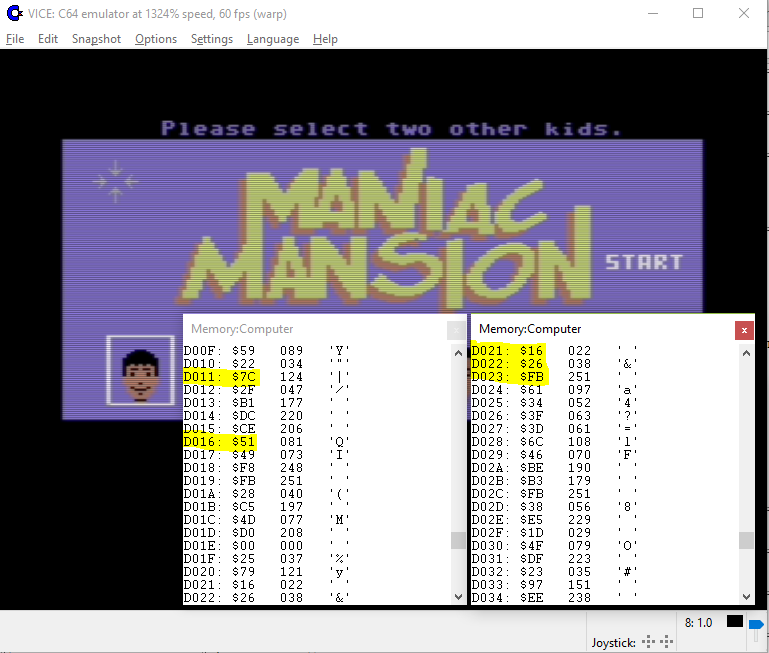 I don't know what's going on in VICE, but the C64 game definitely uses multicolor character mode for the graphics. (And standard character mode for the text; as others have said, you can have both at once as long as they're on different scanlines). You can tell it's a character mode because the graphics use repeating 8x8 tiles, and because the game moves at more than like 3 FPS (updating the entire screen in bitmap mode was very slow, and basically never used in games outside of 3D sims and title screens); it's multicolor because the pixels are double-wide.

Incidentally, the DOS version does not use the same character map as the C64 version; all the custom characters have been redrawn. The C64's double-wide multicolor-mode pixels are very distinctive; compare screens like this one on the 64 with the same room in CGA or EGA modes in the DOS version.

19
What graphical effects can be created by changing the VIC-II settings?
19
Can a Commodore 64 use two screen modes on one scanline?

10
Behaviour of $D000-$D3FF section on the C64 during bankswitching
8
How to transfer files to C64 emulator quickly
22
What's a good way to implement this "splashing water" effect on the C64?
19
Can a Commodore 64 use two screen modes on one scanline?
4
How is the 320x200x16 graphics mode mapped in the IBM PCjr?
47
How did C64 games handle music during gameplay?
9
How is PETSCII used by assembly-language programs?
11
What graphics sytems used display lists?
5
Why can't the VIC-II handle ECM and Multicolor at once?