How to get Windows XP to detect a DB-15 gameport joystick?

I've got an standard interface (DB-15 analog) joystick connector on my Windows XP gaming system. It works fine for DOS applications (booting into DOS directly, not using XP at all). However, nothing in XP detects it. Since DOS games can talk to it, it must be hardware compatible. Does XP need a special driver for legacy joystick support/how can I use it for my XP games?

It looks like you need to explicitly add the device - i.e., it isn't plug 'n play like USB or even like a lot of older devices (e.g., mice & keyboards on PS/2 ports).

The DA-15 Joystick port (BTW, not to be confused with the AUI ethernet connector, which is also a DA-15 with additional locking hardware!) has no standardized provision to detect what is connected to it. The standard PC implementation of such a port (basically a bunch of 555 timers that are tuned by the variable resistors in the joystick) cannot even reliably detect if anything AT ALL is connected to it, a game port with nothing connected will just present nonsensical data to software.

Hence, the OS, if it supports the game port hardware at all (Post-XP Windows by default will not work with the standard PC implementation!), needs to be manually configured for the type and number of joysticks connected.

Also, the legacy (standard) type of game port is non-autodetectable hardware in itself. Actually, there seems to be no easy way even for a configured driver to ascertain whether it is reading from an installed game port or reading garbage data off the bus in its absence. This is the likely reason modern OSes will not by default support it, since a misconfigured or autoprobing driver could potentially cause a severe hardware crash (eg if some other legacy hardware uses some of the I/O resources that a multi-port gameport card would use).

The same is basically true for your DOS games, with the differences that a) DOS simply choses not to involve itself at all with the game port, and b) the games bring their own driver that is set up with reasonable defaults, and relies on the user having installed their gameport hardware correctly.

Windows XP will not automatically detect DB-15 gameport joysticks. XP has to be told what kind of joystick to expect at the gameport using the Game Controllers item in Control Panel. Flightsticks, arcade joysticks and gamepads are treated the same. 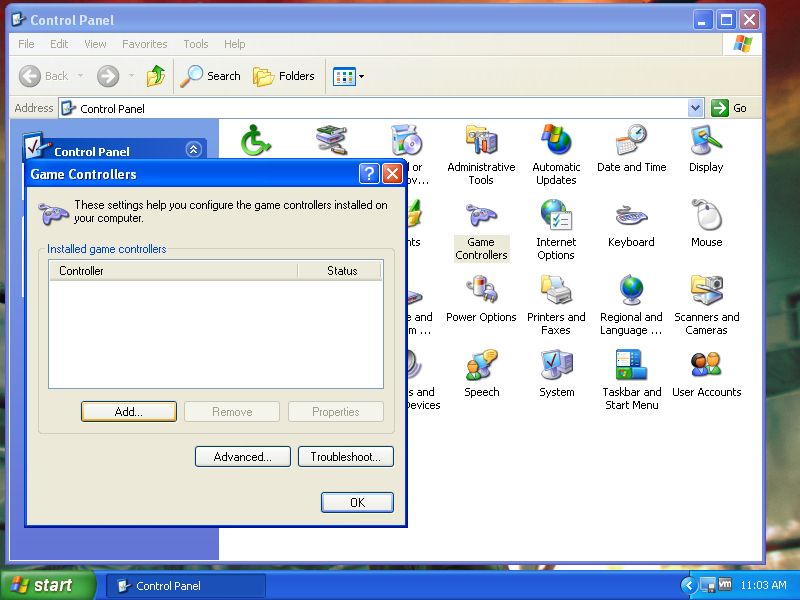 Full instructions for installing a gameport joystick in XP:

Not the answer you're looking for? Browse other questions tagged joystick windows-xp or ask your own question.

5
9-pin port for both RS-232 and Atari joystick?
20
What is the history of DE-9 joystick ports?
17
How to create a switchless multi-system 2 button Atari joystick?
1
New joystick (or build one) for Atari 800
17
Why did pressing the joystick button spit out keypresses?
14
What are the electrical characteristics of a PC gameport?
2
How do I read the position of an Apple II joystick?
4
Joystick adapter from 9-pin to USB
2
How to properly convert an active-low joystick routine to active-high