What does “Expanded Memory” mean on a Philips Videopac G7000 game?

I bought a Philips Videopac G7000 because it looks awesome. Now I need to shop for some games. 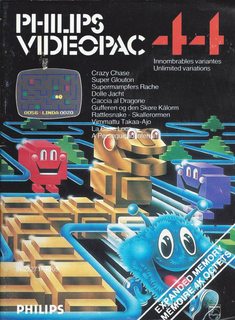 However, on the box it says EXPANDED MEMORY/MEMOIRE 4K OCTETS. Does it mean that I need a memory expansion? My computer only has 64 bytes of RAM! There's nothing about this in the manual.

This just denotes the 'new' expanded cardridges with a game using a 4 KiB ROM. They are also known as 'Challenger Series', include titles like UFO (Astroids) or Freedom Fighters (Defender).

While the external address space was limited to 2 KiB, the cartridge port did feature two select/address lines, so up to 4 ROMs with a total of 8 KiB could be added without further tricks. Still, early games did fit well in just one ROM. It wasn't until 1981 when UFO/Satellite Attack (#34) showed up as the first game requireing two ROMs (4KiB).These games where marketed as 'Challenger Series' and often hyped with the 'Expanded Memory' claim you noticed.

Addendum: William Cassidy great Odyssey² Homepage! has it covered with a seperate FAQ entry: What is the Challenger Series?. Prime source for information about Odyssey2/G7000 anyway.

Not the answer you're looking for? Browse other questions tagged memory game-cartridge or ask your own question.

26
Core Memory Stability
22
What happened to bubble memory - is it still being sold?
5
How does memory addressing/mapping work in 8-bit systems?
1
How much time does a Mac SE/30 with 128 MB of memory take for its power-on memory test?
6
Did the PC/AT-bus use its expanded address space?
23
How does the Gameboy's memory bank switching work?
4
How did “RAM” cartridges for the C64 work?
3
How does the GameBoy's Memory Controller MBC1 Work in Mode 1?
4
How much memory does this SYM-1 have?