Are there any drivers available to use DivMMC on the Spectrum +3e with CP/M plus?

Heading says it all. I have a Spectrum +3 (with +3e ROMs if that makes any difference) with a DivMMC SD card interface.

This works fine in +3e mode, but as I like to use the +3 with CP/M plus (Original Amstrad/Locomotive) are there any CP/M drivers available to use the DivMMC as a drive C:?

Or are there any technical reasons why this wouldn't be possible?

This video seems to imply it's possible with a DivIDE, at least. Unfortunately, there is no further explanation on that.

I think this page (in Spanish) has what you're looking for. It describes how to install and use CP/M with divMMC (a full translation of the installation steps and CP/M section is at the bottom of this answer). There are two files that need to be downloaded: an SD card image and possibly some ROMs (see below). The CP/M hack from Otivax (mentioned in @mcleod_ideafix's answer) is included:

When you see 1 MMC 1 press ENTER and the distribution menu will appear:

The available options2 are:

The instructions are for use with a ZX-Uno hardware emulator but I strongly suspect they'd work fine on original hardware. It's not clear if a special ROM is required but if one is one can probably just burn the ROM image to a physical ROM chip and install it in the Speccy3.

1 Listed on the "Physical drives" line on the boot screen.

2 I've only shown CP/M but there are other applications that can be booted off of the SD card.

3 Spectrum cores, below, refer to code for programming the ZX-Uno's FPGA; just ignore them if you're using original hardware.

Partial translation from the original Spanish:

First download the disk image of the distribution that I've created and save it to an SD card. The image is designed for 1GB cards and larger. For use with CP/M only 1GB and 2GB cards are supported (larger sizes won't work).

As mentioned above, this disk image needs to be used along with Garry Lancaster's +3e ROMs. If you haven't yet installed them in your ZX-Uno ROM set, do so now. The easiest way to install my most recent ROM set (as of 2020-10-15) is by downloading it from here: 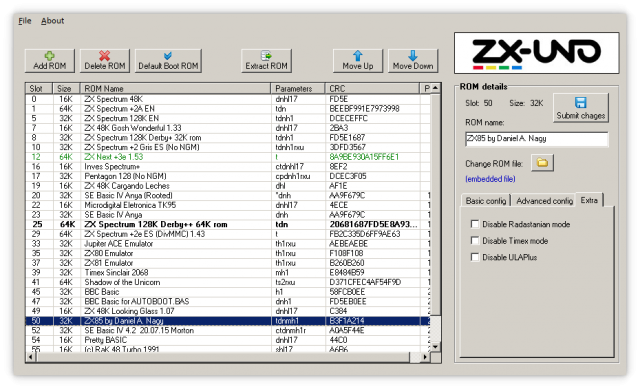 The simplest way to install these ROMs in your ZX-Uno is to place the ROMS.ZX1 file in the root directory of your regular SD card (the one you use for esxDOS). Insert the card into the ZX-Uno and start it in "rooted" mode by pressing / on the numeric keypad. When the screen turns red, press ESC then choose, e.g., the Spectrum 48k ROM. Once you've booted into rooted mode type .ROMSUPGR (make sure you include the leading period). The ROMs will now be burned and you can start using your ZX-Uno with the new ROMs.

Lastly, the image only works with mcleod_ideafix's Spectrum core which allows one to select a +3e ROM from a list. Note, however, that with the EXP27-160820 version CP/M won't boot. Therefore I usually use the EXP27-230420 version (modified by azesmbog to include support for the SAA1099 sound chip) which works perfectly with CP/M. If you don't plan to use CP/M then mcleod_ideafix's latest Spectrum core will work fine.

The various Spectrum core versions can be downloaded from here.

Place the SD card you prepared into the ZX-Uno. When it starts, press ESC, select one of the +3 ROMs, then let it finish booting. You should see something like this: 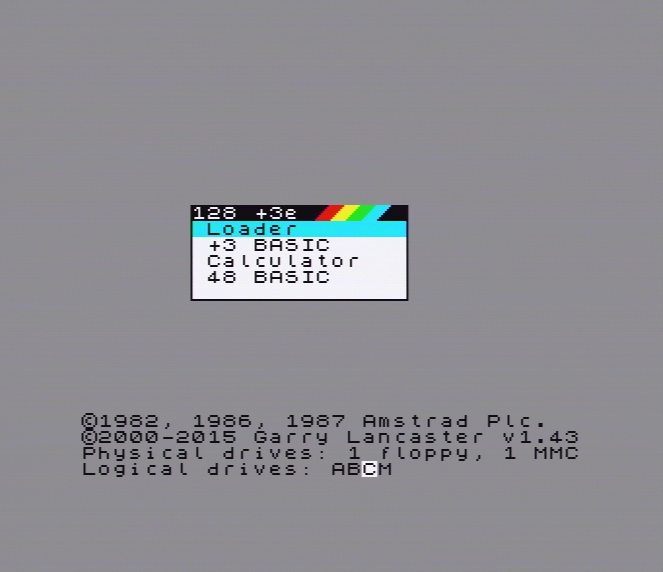 Depending on which ROM you chose, the menu will appear in either Spanish or English. The menu may be titled +3e or +2e but this won't cause problems. What is important, though, is that 1 MMC appears; this indicates that the SD card is available. If you see 0 MMC then do a Soft Reset (CTRL + ALT + SUPR) until 1 MMC is displayed. If that doesn't work then try removing and reinserting the SD card (without powering off) followed by a Soft Reset.

Once you see 1 MMC press ENTER and the distribution menu will come up: 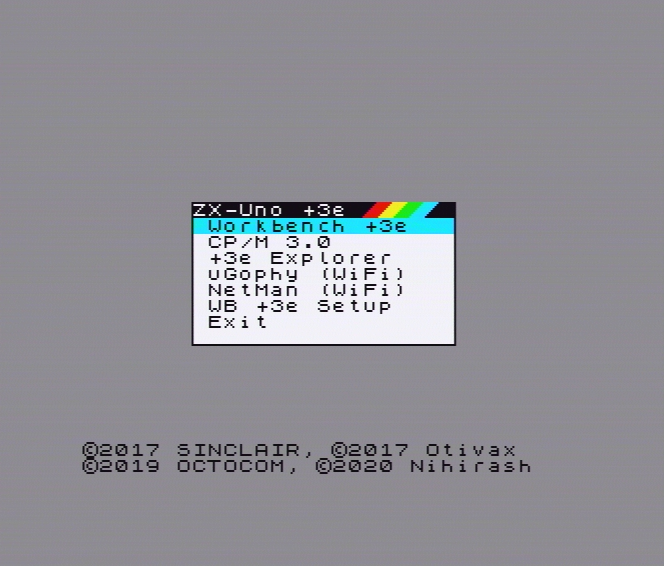 The available options are:

To use this, the image must have been written to an SD card no larger than 2GB in size and the Spectrum core must be a supported version (such as EXP27-230420) since the one published on August 16, 2020 won't work. Before starting up I usually set the CPU speed to 28 MHz since this makes CP/M a bit more response than at the Z80's original 3.5 MHz.

Once booted, we can use the same Locomotive CP/M 3.0 that was released for the Spectrum +3 but modified to support mass storage devices such as the divMMC. 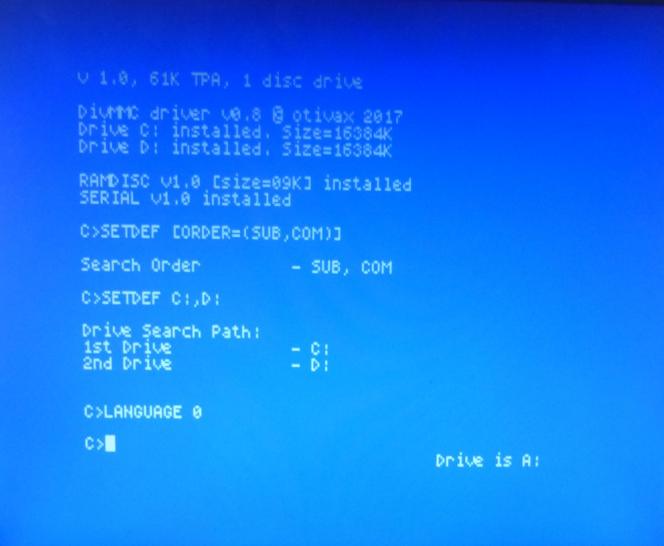 This CP/M installation has been updated with the utilities and patches found on this page.

The C: and D: drives are full of all sorts of programs: 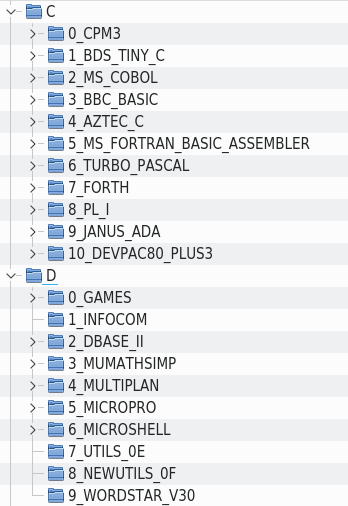 Most of these are from the "Multicomp FPGA - CP/M Demo Disk" with programs for CP/M 2.2 but there are also ones for CP/M +3 such as HiSoft's DevPac80 assembler development package and the WordStar 3.0 word processor.

In addition to the distribution image, you can download this file which has a whole bunch of manuals and other instructions, in both Spanish and English, sorted by the program folder that they refer to. This is an essential reference if you want to get the most out of this distribution. 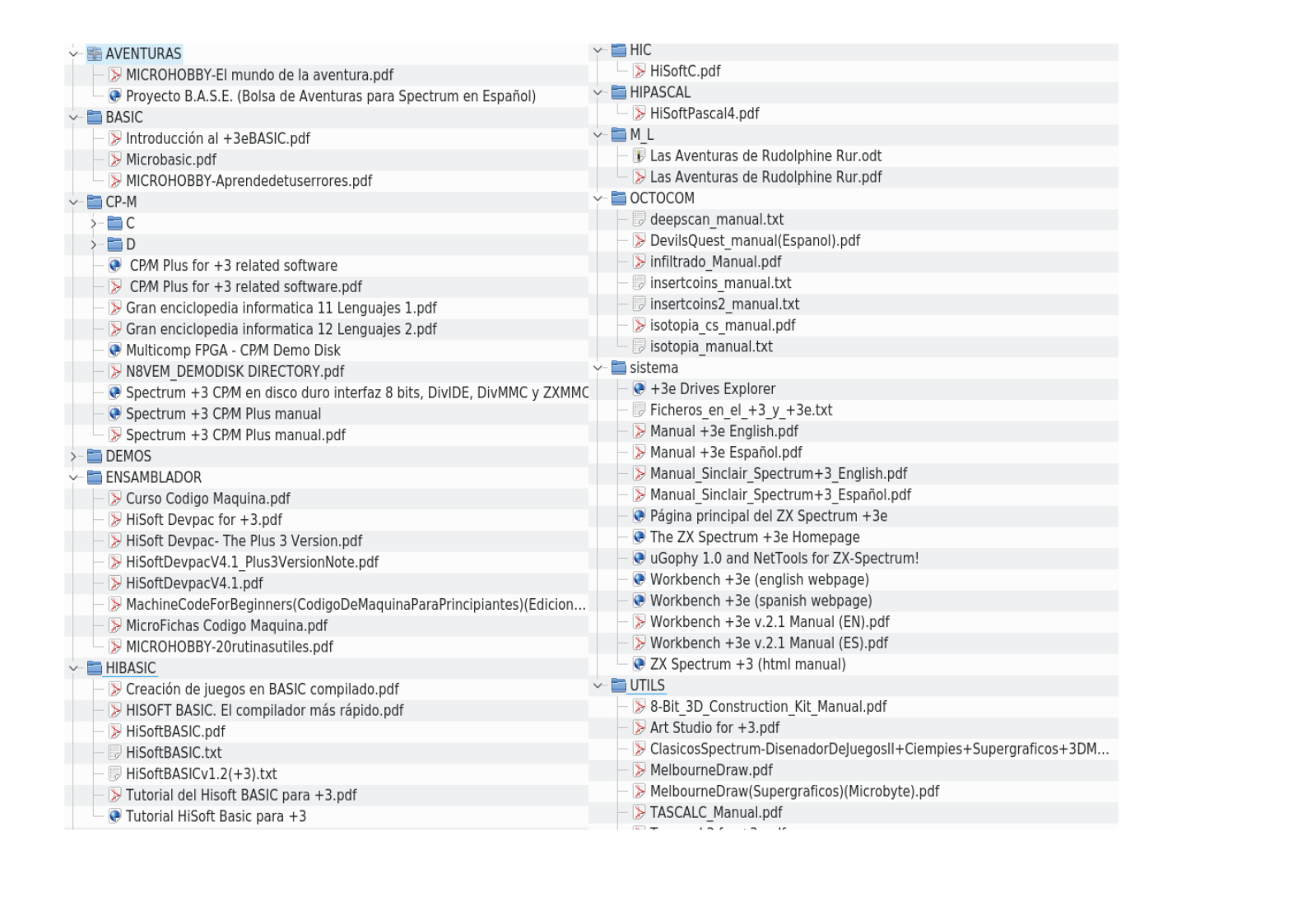 Video about the distribution

I saved this 'til now since I knew if I mentioned it earlier you'd go watch it and not bother reading any of the stuff that I put so much effort into writing! ☺

Modifying the contents of the distribution

A description of how to modify, extract, and add to the distribution will have wait for a later article, hopefully I can post something soon.
[ I think this is the article they're refering to (in Spanish). ]

Yes, there is an experimental FID driver written by the same guy (Otivax) that made the DivIDE version. This thread tells all the story about it. He uses a loader that is fired from a +3E environment. The loader loads some CP/M system files in memory, initializes the memory arrangement suitable for CP/M, patches those system files, and finally, it inits CP/M which in turn loads the FID driver, but from the SD card, not the floppy.

Not the answer you're looking for? Browse other questions tagged zx-spectrum cp-m spectrum-plus-3 sd-card divmmc or ask your own question.

6
Can a Harlequin ZX Spectrum clone be modifed to run CP/M?

17
Are there any ZX Spectrum applications (mainly games or demoscene productions) that use a port other than $FE to access the ULA?
16
Toolchain and workflow to build CP/M
13
Writting DSK images onto a 3″ floppy for Amstrad/Sinclair computers
12
Are there any known viruses for CP/M?
3
Sinclair ZX Spectrum with DivMMC load issue
3
Is there a Spectrum +3 ROM disassembly available with the addresses of the instructions included?
14
Did the Samsung SPC-650 have any hardware or firmware differences to the genuine Sinclair Spectrum+?
1
How does the Spectrum +3 know how many files are in the disk's directory?
3
Is there a "most correct" name for the disk format / filesystem used by Amstrads and Spectrum +3's?
31
Did John Carmack really invent "Adaptive Tile Refresh"?