What is causing the problem with the RAM in this (claimed) Spectrum 48k?

I bought what was claimed by the seller to be an Issue 4S Spectrum 48k.

I tried loading games and some worked while others didn't. Turns out it was the 16k ones that worked and 48k didn't. This pattern took a while to work out because the tapes were old as was the tape player. I put those that worked in one pile, with the others in another pile. And tried and tried again, in the time honoured fashion, changing volume, leads, cleaning. Games like Atic Atac would appear to load then reset the machine.

Others would fail with RAMTOP no good errors on the BASIC loader. Errors I had rarely seen before.

Others with other memory errors like Out of Memory.

I suspected a memory problem.

So I tried POKEing and PEEKing to all of upper memory with 255. Checked out OK.

Various weirdness occurred. Then it occurred to me from looking at how the ROM RST 0 (hard reset) worked that it might be certain bits working while others failed. Hence why 255 worked but 0 did not. 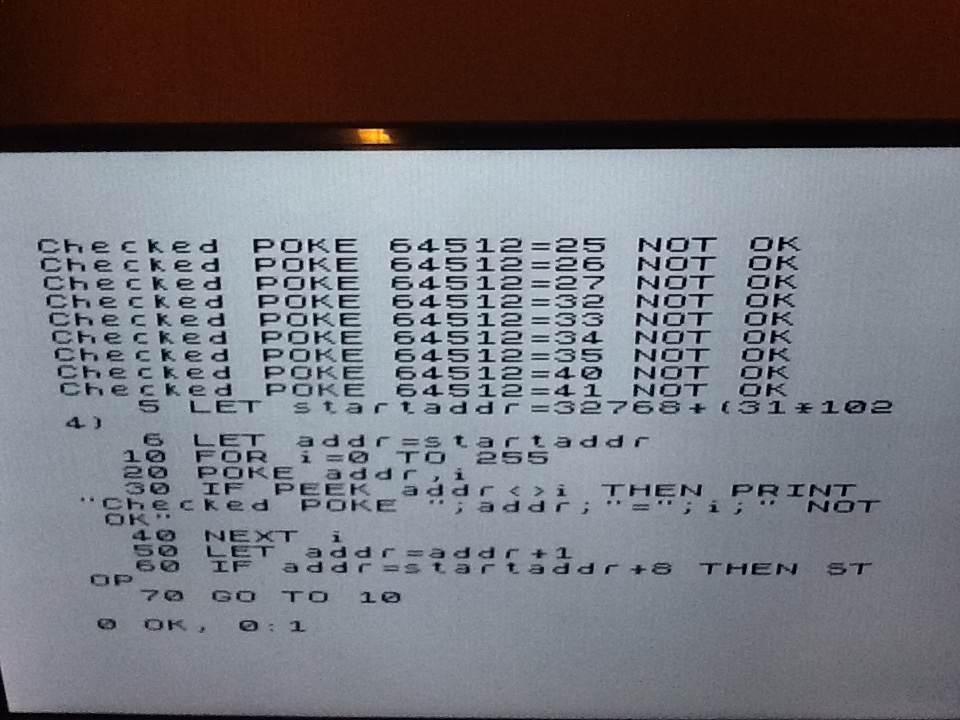 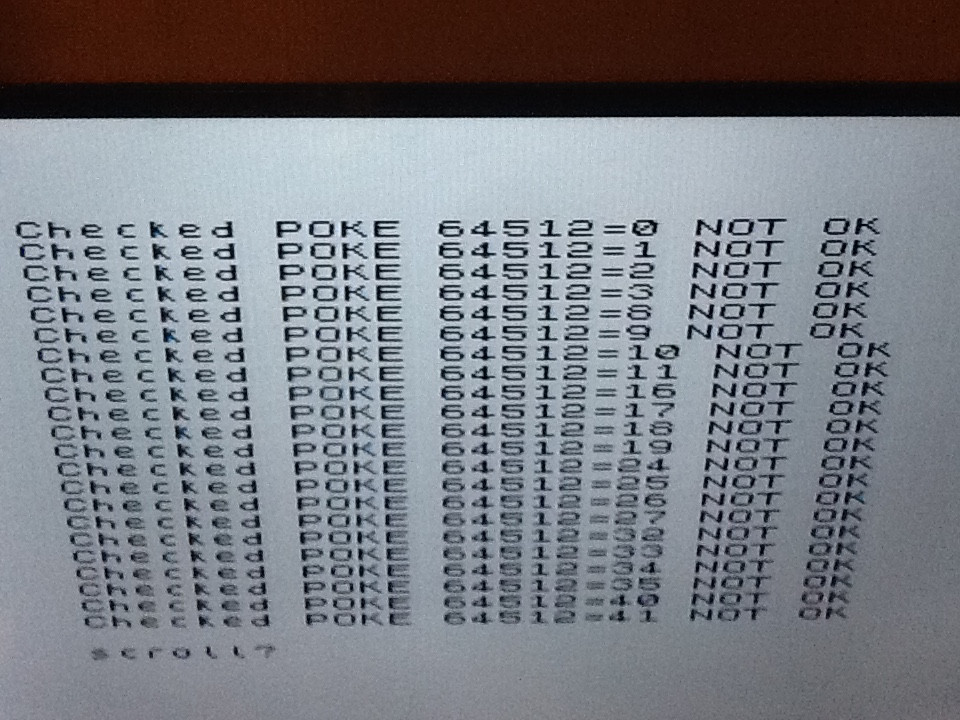 The common element here appears to be that bit 2 stays on, no matter what. (using convention that bits are 0-7. That is, the bit that adds 4 to the binary number represented in decimal.

This masks 255 and other values, as per the screenshots. But most values fail.

According to the seller this is definitely a 48k Spectrum. He asked me to open it up and check and I did. The chips are there.

What could have caused this? Damage in the post? Old capacitors? Damage when the seller did the composite video modification? 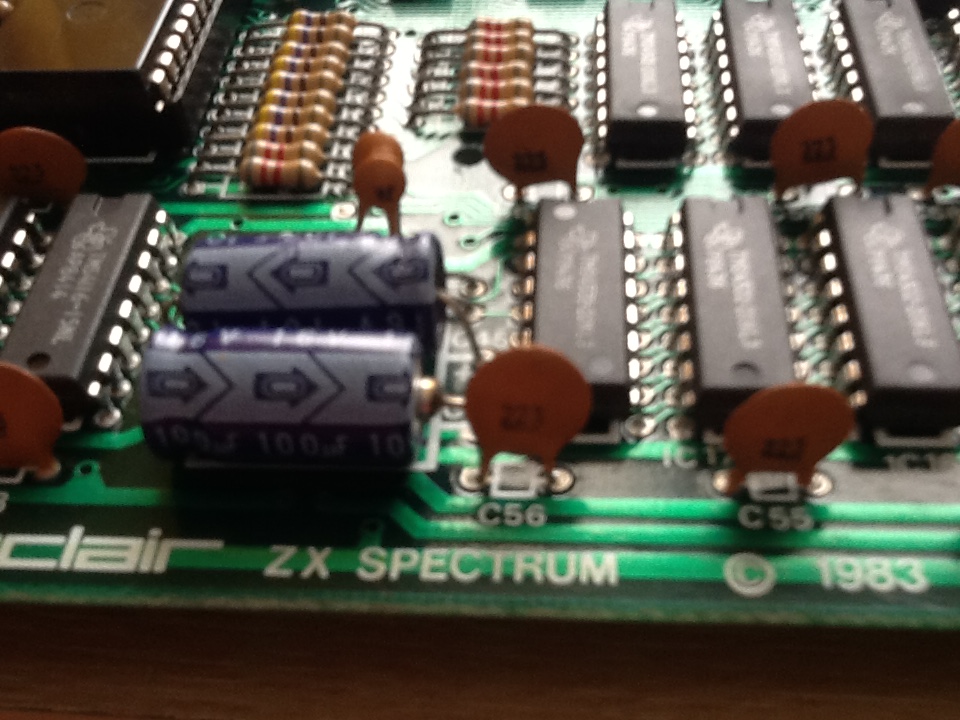 And what about the bulging or solder damage to C64? No, not a Commodore 64 the capacitors marked c64? 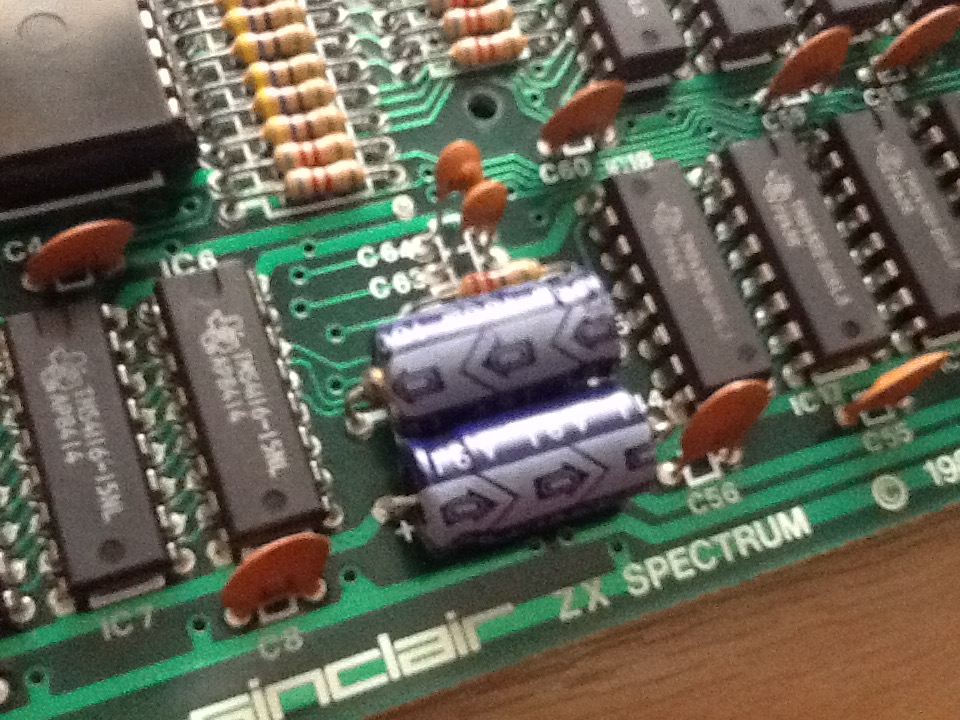 Now trying to show the dirty and shiny side of the ICs. I apologise for the iPad 2 poor quality photo. I will post a better photo if I can get one. 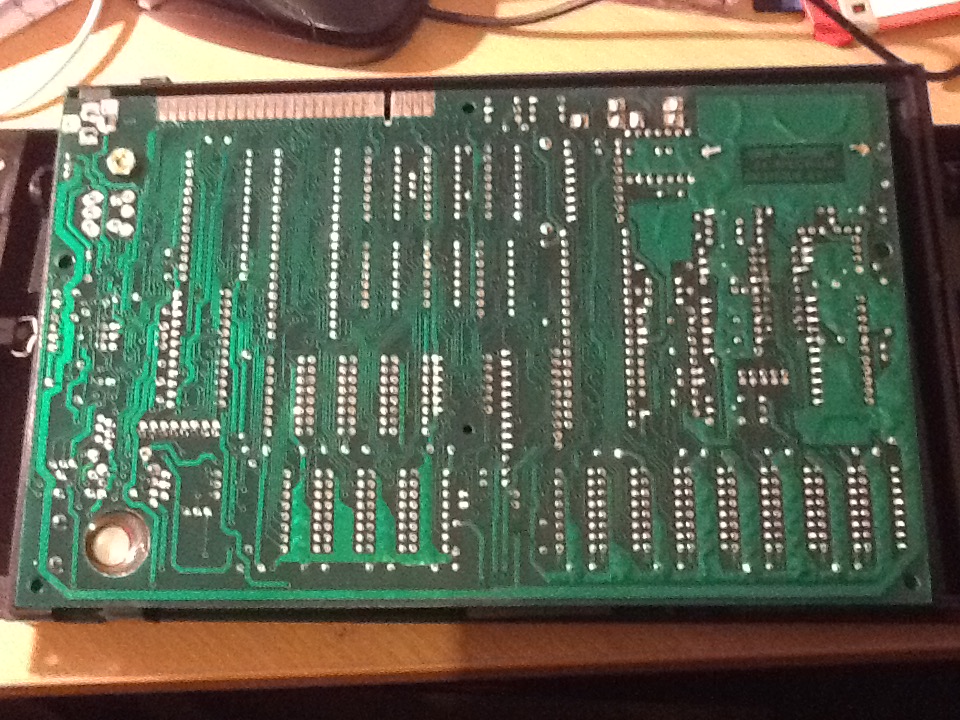 Some notes on RAM repair, which may or may not be useful:

The RAM in the upper memory of the issue 3/4 spectrum is usually a TMS4532-20NLx chip. These are 32Kb chips that are pin compatible with the 64Kb 4164 type, so as pointed out by lvd in the comments to Tommy's answer a 4164 can be directly substituted. If you do happen to find a source of 4532s, you need to ensure that the 'x' matches the ones you already have: in order to work correctly the -20NL4 chips need their A7 line pulled high during column select, while the -20NL3 type need it pulled low (this is because a 4532 is actually a 4164 that failed testing due to a fault that only occurred in one half of the columns of its memory array, so the other half is being ignored).

On issue 3 boards, the RAM is socketed, so can be easily replaced. Unfortunately, no such luck with issue 4 boards: they're soldered directly. If you're confident with a soldering iron they can be removed and replaced still (they're DIP16 chips, which aren't too hard to remove), but if you're not experienced it is possible to damage the board in ways that are hard to fix, so alternative approaches are recommended.

How to test memory chips while they're still in the system: there are a variety of ebay vendors that are selling a dirt-cheap 8-channel 16MHz logic analyzer. (It's sold as a clone of the Saleae Logic, but isn't actually compatible). It can be used with the "sigrok" software to view the signals produced on the different pins of the chip. First check the chip has power and ground (probably using a multimeter). Then hook it up to CAS, RAS, some random address lines, and the Din and Dout pins, and check that all of them have stuff happening. If nothing is reaching Din, CAS, or RAS, or any of the address pins, the chip's connection to the board is broken somehow. If data is being sent to all of these pins but nothing is coming out of Dout, the chip is faulty. If data is coming out of Dout, then again the chip's connection to the board is the problem. Chip pinouts are available at https://faqwiki.zxnet.co.uk/wiki/DRAMS

A single bad DRAM, probably — in machines of that vintage each DRAM holds only a single bit at each address; you use eight in parallel to serve an 8-bit bus. And the Spectrum uses physically separate chips to serve its first 16kb and the other 32kb.

So a single chip holds the value of bit 2 for every address at or above 32768. No matter which address you pick in that range, you're talking to the same chip. An alternative chip handles bit 0, a third handles bit 1, etc. I can't find schematics beyond the issue 4a/b, but from that:

Such machines also use an open-collector bus: lines look like a logical 1 unless something is connected to them that says otherwise. So a RAM chip that wasn't there at all would produce this problem, just as one that was simply not functioning would.

So, check for dead solder, etc, going to that DRAM and at worst consider replacing that chip. As a diagnostic, consider switching it with one of its neighbours and see whether the set bit changes.

By the way just to add more feedback on this topic. When you startup your spectrum 48k it automatically does some checks (namely memory ones). If you short (with care!) pin 5 of IC23 (quad 2-input OR gate) to 5V only during startup you are letting the OS know that there are no upper RAM available and hence you could end up only with 16k of memory. This may be the reason you have a 48k but only see 16k. Look it up on disabling upper ram on spectrum 48k.

8
In what ways is DRAM likely to fail?

12
How do I replace a ZX Spectrum 48k keyboard membrane?
7
What is the maximum BAUD rate for ZX Spectrum tapes?
7
RAM contention and what counts as different banks
18
What are tacts in the context of ZX Spectrum systems?
3
Sinclair ZX Spectrum with DivMMC load issue
4
ZX Spectrum: What is the "T" state value, with reference to sound?
13
Why does this ZX Spectrum machine code "Hello World" routine not produce the expected result?
4
ZX Spectrum scroll waiting for user input problem
9
ZX Spectrum 48k Power Supply outputting 15V
6
What were the different RAM refresh techniques in the 80s