Why were teletype printers not used for DOS computers?

Before the widespread use of dot matrix printers, early issues of Byte and Kilobaud magazine regularly featured articles discussing conversion of electric typewriters for printers. 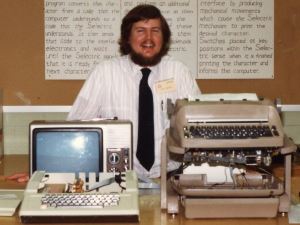 Electric typewriter as printer for Apple II in 1981.

For those mentioning that dot matrix existed in the 1970's... The pre 1981 dot matrix where industrial and not priced for small business or home. For example banks, hospitals and insurance companies often used "band printers"; the print head and ink ribbon where 10in tall and printed the entire page with one swipe. Data centers usually used 132col paper. It was not until Centronics and Epson (MX-80) entered the low end market that PC users got inexpensive hard copy. Was there an inexpensive dot matrix in production prior to 1981?

In the answers that have been provided, it seems the cost is being overlooked. In 1977 $840 would be equivalent to about $2000, and $475 would be about $1000. This would be far above the average home budget. The same is true for other printers that have been mentioned.

Why were teletype printers not commonly used after DOS became available for business and home use?

Teletypes were not all limited to use over a modem. Many (e.g., the Model 43 - I had one of those) even had an RS232 compatible interface and could easily be used as a regular computer printer. But since most teletypes were designed for communications, and typical modems of the time were low speed, the teletypes themselves were low speed printers. Typical dot-matrix printers of the early 1980s were much faster. For example, the Epson MX-80 could print up to 80 characters per second. The TTY 43 was actually a dot-matrix printer but since the primary market was communications over cheap (for the time) modems, there was no design rationale for more than 30 characters per second (actually I think it went a bit faster to compensate for CR/LF speed). The Decwriter LA36 was similar vintage - and speed - as the TTY43 and actually was in use quite a bit with early microcomputers. The LA120 had a top speed of 120 CPS, more typical of the dot-matrix printers of the early 1980s and was definitely used quite a bit as a printer. However, your typical PC buyer would probably not have a reason to spend extra to get a keyboard with their printer when they weren't going to use it as a console for their computer.

The electric typewriter conversions were generally an attempt at "letter quality" printing. The first generation of dot-matrix printers were no substitute for typewriter quality output, and the teletypes were generally no better. Daisy wheel printers, like the Diablo 630, were actually better suited for computer printing than a typical electric typewriter, but a bit earlier than DOS (or at least MS-DOS/PC-DOS), in the 1970s, electric typewriter conversions may have been a relatively cost-effective alternative to a regular computer printer. You could use a serial printer (with a keyboard) as a console with MS-DOS, but you wouldn't be able to run dBase II or WordStar or any of the other programs that were the selling force behind DOS-based PCs.

The assumptions of this question are at best misleading and maybe based on personal experience, but not the situation at the time cited.

As requested I just pulled out the very second issue of Kilobaud Magazin of February 1977 (*1).

Next, page 130 features a rather high quality (compared to an ASR33) IBM Selectric with RS232 at USD 895. It might be useful to remember that the Selectric wasn't developed primarily as a typewriter, but as printing terminal for mainframe usage. It's not their developers' fault that it was also a darn durable office typewriter. They just made a reliable device with no hard connection between the keyboard and print mechanism.

Finally page 49 shows how cheap dot matrix already was in the spring of 1977, with an ad for a printer with a parallel port at USD 425 - when bought as kit (just electronics and print mechanics) it got down to only USD 179. It's also interesting here that a current loop (50mA) version, as a TTY replacement, was rather expensive at USD 575. This would not only mean one has to pay for an additional current loop interface in the computer (not available by default on most computers), but also pay even more for the printer itself. Ok, still less than a full teletype, but why?

Kilobaud was always a magazine directed at the hobbyist, not business or large users, attracting advertisers targeting a low price range. I bet pulling any other magazine from the same time will show a similar result. Even more so after 1977.

Proof#1 - Already in the spring of 1977, at the very start of microcomputer usage, shows that dot matrix printers were not only widely available, but also undercut TTYs by a large amount.

There are many more featuring various dot matrix printers in the range of USD 400 to 800, but only a single one featuring a (Type 43) Teletype on page 41 - still at USD 989. So while TTY stayed basically the same over this 4 year period, dot matrix printers did not only improve but dropped quite a lot in price. Oh, and a 13 column (!) Selectric with parallel interface is down to competitive USD 659 (p.71).

This is of course only one magazine and two issues, but I'm quite sure this snap sample will hold when checking more data from other sources during the time period.

Proof#2 - By 1981 the dot matrix printer had complete victory and teletypes where merely an outdated and expensive side note.

Of course, there were many articles in these early magazines to convert some TTY, electric typewriter or Etch-a-Sketches to a hardcopy devices. As much as there were even more articles about building your own computer from parts or writing an OS from scratch.

And yes, for hobbyists with too much time on their hands, finding a TTY in a scrap sale was still a feasible idea for the fun alone, but it for sure was never anywhere near mainstream.

Conclusion: The claim of teletypes being the 'most common' printer before DOS never existed in the first place.

Last but not least, considering the above claim, the PC (and DOS) in 1981 was meant for professional use, not as a hobbyist toy. But even with the clearly made for hacking Apple II the first interface was parallel, and the first printer offered by Apple (in 1978), targeted at hobbyists was a (thermal) matrix printer - undercutting any TTY price by far.

Having said all of this, there are special occasions where even in 1980 new development for TTY was a thing. In my case I had already an Apple II (and a cheap dot matrix printer) in Spring of 1980 when I joined the Bundeswehr (German Army). Due to some less than official circumstances it worked out that we used my Apple to improve some bureaucracy during my service - and to produce printout I did build an interface so three(!) TTY could be connected to print in parallel. After all, they were dead slow, so it was better to have three interleaving print jobs and merge the pages later on, than to wait three times as long doing the same on a single TTY. This was also quite some fun to program :))

The reason was less technical or due to budget but rather availability. As part of the staff of a signaling battalion TTYs were available by the dozen :))

*1 - Which is BTW the issue featuring a 5 page Apple 1 review plus the original first Apple ad.

The teletype was not only the printer but for some old systems it was the only monitor for standard output. Having a CRT monitor made that function obsolete so that leaves only printing.

The teletype was originally designed for copper line telephone network based text messaging. MS-DOS had no networking capabilities but you could install a modem in early PCs and use modem terminal software to speak directly to a teletype using telephone lines.

Buying a modem and a teletype was more expensive than just buying a dot matrix printer which printed faster and was supported by most software from which you would want to print.

Sending a file to a teletype through a modem is kinda like a fax; which was another technology that was disruptive to the teletype market.

Although printing news, messages, and other text at a distance is still universal, the dedicated teleprinter tied to a pair of leased copper wires was made functionally obsolete by the fax, personal computer, inkjet printer, email, and the Internet.

In the 1980s, packet radio became the most common form of digital communications used in amateur radio. Soon, advanced multimode electronic interfaces such as the AEA PK-232 were developed, which could send and receive not only packet, but various other modulation types including Baudot. This made it possible for a home or laptop computer to replace teleprinters, saving money, complexity, space and the massive amount of paper which mechanical machines used.

Despite the obsolescence of teleprinters by the 21st century, its distinctive sound continues to be played in the background of newscasts on the New York City radio station WINS, and Philadelphia's KYW, a tradition dating back to the mid-1960s.

Most of you guys sound like you've read a few things but weren't around at the time. Not a complaint, just an observation.

We also had several IBM Selectric typewriters which we hacked and added RS-232 ports to use as printers for PCs. The Selectrics we had did not have an RS-232 interface. This did not seem to be real common at the time but there were a few hacked units around. Exec secretaries liked them as they had to give up their typewriters for PCs and WordStar, but they wanted to keep the typewriters text quality for memos and letters.

Daisy-wheel printers were also available but again it was a cost. They also knew getting the techies to convert them was a way to keep the typewriter as it could be used both ways. Eventually someone came out with a upgrade for the IBM typewriter to adapt it as a printer as I recall the kit cost about $30. Damn thing sounded like a machine gun while in use but it did a great job and looked MUCH better than the 9 pin dot-matrix printers of the time did. I can't remember what year they started coming out but 24 pin units were too expensive at the time. Especially when we had a excess of the Selectrics laying around.

As for using the printing terminals as printers, they were indestructible! No sense in trashing them and buying something that produced something that looked no better. Particularly for printing boxes and boxes worth of mainframe logs and things that we were required to print but rarely got looked at. In addition the ribbons on those units lasted much longer than the newer dot matrix units did.

Not the answer you're looking for? Browse other questions tagged history ms-dos printer or ask your own question.

26
Where did DOS store graphics fonts?
17
What tools were used in late MS-DOS era for reverse engineering and patching binary executables?
14
Is there a reason why MS-DOS didn't use more English words for commands?
50
Why did line printers have 132 columns?
30
Why did many 9-pin printers use only 8 pins for graphics?