Was the TRS-80 Model 1 ever actually sold new with that name?

When Tandy introduced the TRS-80, the computer we know now as the "Model 1" or Model I" was simply called the TRS-80. No "Model" designation was necessary. The early releases were as follows:

One assumes the original computer was given and marketed with a distinguishing name once the Model II began to be marketed. Was it:

I have searched, and have not been able to find an authoritative answer. Some sites use Arabic, some Roman numerals. If there was a distinguishing name given, would someone please post a picture of the box with that name, or perhaps an official Tandy advertisement using that name? (Without a picture, it didn't happen! 😉) A link would be useful as well.

I've gathered some pictures. Here is an early USA advert. 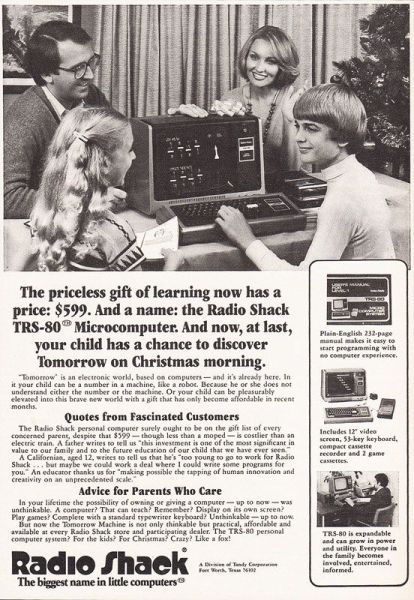 Here is a later USA ad, after the Model II was released. 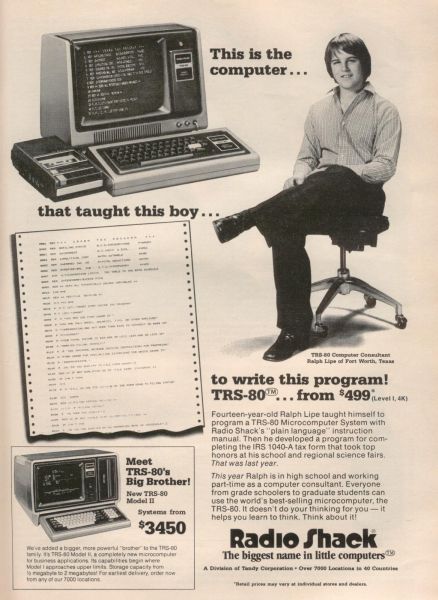 Note that the price has gone down, but there is no indication that they have extended the name for the original model. The new Model II is specifically called out though. (The "Level I" refers to the low-end BASIC sold with the cheapest system.)

Here is a later ad from the UK. It also came after the Model II was released. 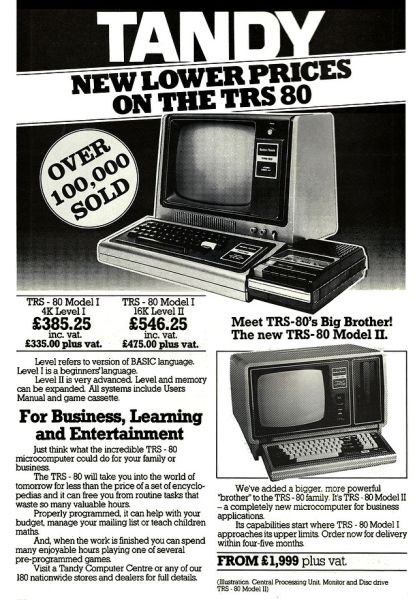 Both the Model I and Model II names are specifically called out, in addition to the two Model I systems for Level I BASIC and Level II BASIC.

Tentatively these ads indicate that the original machine was publicly referred to as the "Model I" in the UK. The catalog Raffzahn mentions is for the USA (I looked it up), so at least in brochures, Tandy would refer to the "Model I" after the Model II came out. The middle image suggests Tandy did not feel it necessary to use the Model I designater in USA ads.

Radio Shack product names not infrequently differed from country to country, even if only subtly. This answer covers only U.S. naming.

But yes, the TRS-80 Model I was sold new under that name and always used the Roman numeral. This happened only after the Model II was released, and the full name including "Model I" was not used consistently.

In their U.S. catalogs through 1979, before the introduction of the Model II, the Model I was always referred to only as the "TRS-80™ computer." See, for example, the back page and page 79 of the 1979 catalog, the latter headlined "The Breakthrough Radio Shack TRS-80™ Computer!"

With the introduction of the Model II, Radio Shack starts using the term "Model I" sometimes, but not always, and usually only when a Model II is nearby.

The back page of the 1980 catalog has an inset headlined "New Low Price on Model I." However, at the computer section of the catalog starts on page 170 with the Model I but always called simply the "TRS-80™ Computer" or "TRS-80."

This continues through the next three pages until we get to printers on page 174, where the page is headlined "Add Printed Output to Your Model I or II TRS-80." Yet even there the product lines have things like "Cable for TRS-80 Expansion Interface" listed next to "Cable for TRS-80 Model II." (Arguably, that's fine because there was no Expansion Interface for the Model II, only the Model I.)

Even on page 175, where the catalog moves on to the Model II, the headline is "Meet the TRS-80's Big Brother!" though it eventually goes on to use "Model I" in the text, mostly:

...whose capabilities begin where the TRS-80 Model I approaches upper limits. Model II operates at twice Model I's speed, but it's not intended to replace — or compete with — the original TRS-80.

By 1981 the term "TRS-80" refers to Radio Shack's entire line of computers, not just the Model III but also the CoCo and the Pocket Computer (PoCo?), all of which were introduced that year. The back cover of the 1981 catalog has no reference at all to the Model I, but displays pictures and descriptions of the "TRS-80 Color Computer,", "TRS-80 Model III" and "TRS-80 Pocket Computer" under the headline "Radio Shack Introduces a Whole New World of Affordable TRS-80™ Computer Systems."

The computer section of the catalog starts on page 169 with a page devoted entirely to the Model I, but the headline "The Amazingly Expandable TRS-80™." Below this, however, the product description uses "TRS-80 Model I" (twice). Usage varies throughout the page.

The next page, page 170, introduces the successor to the Model I, headlined "The New Model III." The description compares it with "Model I," and "Model III" is used as a qualifier throughout on accessories such as disk drives that work only on the Model III.

Page 171 is headlined "TRS-80 Model I & III Software," and stating that "All programs will work on Model I or Model III unless otherwise noted." Just a few items have "Mod I only" beside them.

And the rest goes on in that vein.

By 1982 the Model I itself is no longer in the catalog, though there is a small section of "TRS-80 Model I Accessories" on page 172. The software page still offers "The Growing Library of TRS-80 Model I & III Software," but "Mod I only" software is gone.

But in original Tandy manuals and documentations I did find many spellings as TRS-80 Model 1. So it seams as if they did keep the Model I seplling thruout all advertisement, but not over all.

Similar BTW for the early distinction between Level 1/2 and I/II BASIC.

Not the answer you're looking for? Browse other questions tagged history trs-80 or ask your own question.

21
Was Amiga the last of the home retrocomputers sold?
8
Was there ever a division instruction with sign of the remainder following the sign of the quotient?
7
Did Radio Shack initially attempt to get a monopoly on commercial software for the TRS-80 Model I?
18
Who coined the nickname "Trash-80" and what was the source of their animosity?
8
How much control of TRS-80 Model III disk drives was possible from its Cassette (ROM) BASIC?
3
What is the layout of the directory track on a TRS-80 Model I/Model III disk?
3
What is the process for TRS-80 Model I & III to boot from disk?
10
Understanding the DMK disk image file format used by TRS-80 emulators
3
How much RAM was sold each year in the 1970s?
15
Which computers did Donald Knuth "mix" together to get MIX?