What video connections were common in Europe?

What video connections were common on European TVs and monitors during the "retro" era?

In the USA, first there were none on TVs (RF screw terminals only) and monitors had composite (yellow RCA, CVBS) or nonstandard connectors specific to the computers they were made for. Later came MDA/CGA (DB-9, digital RGBI) to monitors, and S-Video (4-pin mini-DIN, Y/C) and Component Video (red, green, and blue RCA, YPrPb) to TVs, and eventually some TVs came with VGA (HD-15, RGBHV) carried over from computer monitors. SCART (RGBS, CVBS, Y/C w/ audio) was practically non-existent in the USA, although I think my family once had a Sony TV/monitor with a SCART input, but we never had anything that would connect to it.

I'm under the impression that SCART was much more common in Europe than S-Video or Component. Is that true, and were the U.K. and France different from the rest of Europe? Were the standard connection types different between TVs and computer monitors?

Before SCART, European TVs often had not video input at all or S-Video on 6-pin or 8-pin DIN sockets (not Mini-DIN). Cinch composite was uncommon until VCRs came out. After that the old S-Video connectors died out and it was most common for cheap TV sets to have only an antenna and one composite in, better TV sets had a SCART input very early. Component video was very uncommon, as the SCART standard preferred RGB on these pins.

I don't know about any European CRT TV which came with CGA/MDA/EGA/VGA inputs.

In the UK in the 1980s and the early 1990s, no video input at all was common. Early video recorders and set top boxes (for the new digital channels) would use RF out. You would disconnect the aerial from the TV, connect it to the VCR or STB, and connect the VCR or STB to the TV with another aerial cable. The TV would see it as an extra channel. You might even daisy chain an STB and a VCR.

When SCART started to appear, we thought that it was great as the quality was rather better than the previous system. I used to have a SCART switch which took three inputs STB, VCR, and XBOX since my TV at the time had only one SCART socket.

I think that some high end TVs had other options but they were not common. The only other that I remember seeing is three RCA sockets (red, white, and yellow) which were often at the front or side and probably intended for connecting a camera.

Up until ~1980 the only connectors TV sets had were Belling-Lee type antenna in. So most VCR and next to all home computers did use RF modulated output toward the TV set (*1). This included even cable networks. While Type F connectors where used for more sophisticated equipment, households were still fitted with Belling-Lee. Professional equipment of the same time did use BNC type connectors.

RCA (Cinch), DIN or Tuchel connectors were, at that time, only used for audio. Especially RCA was rather rare in Europe.

Around 1977-81 several TV manufacturers did come up with proprietary connectors, often based on DIN 41524 connectors (the large ones). They all vanished in the early 1980s in favour of SCART, which was a quite nifty standard putting composite, component and RGB plus sound into a single connector. First of course at the higher priced models, but soon across all available TVs.

There were cheap imported VCRs offering only RF modulated and Cinch-component output (*2), thus Cinch to SCART cables became somewhat common. Similar Cinch inputs were only available on cheap imports - in addition to SCART.

SCART was the base connector for all TV sets until about 10 years ago (~2010), since then being replaced slowly by HDMI as main connector, but many sets still got at least one SCART input.

During the 1990s some sets included S-Video and VGA input. But that was more of a marketing issue, as SCART already featured all relevant signals to cover anything Composite/RGB/S-Video, so all needed was the right cabling.

With SCART the connection of home computers was a no-brainer. No matter if it was a C64, Atari ST or an Amiga, there were SCART cables for all of them.

*2 - usually Japanese and Korean manufactured devices. It's safe to assume that they where mainly designed for the US/Japanese market.

It is relatively simple to add video/composite input and sometimes also RGB so it was not uncommon that electro hobbyists added these inputs to TVs.

For the home market, TVs were often used because of their easy availability: most households already had one, and the image was often good enough for the low resolution of early machines. Professional users would often buy a purpose-made computer monitor, which would become essential as display resolutions increased and computers entered the GUI era.

I'll concentrate on dedicated computer monitors, as other answers have already given good explanations of the connections available on TVs of the retro era.

In the early 1980s, a high-quality colour monitor would use an input with separate RGB pins, and potentially an Intensity pin. These inputs would be driven at TTL voltages, giving 2^3=8 or 2^4=16 colours onscreen (similar to CGA/EGA displays for IBM-compatibles). The physical connector itself would be manufacturer-dependent, but was often a DIN 41524 socket. Here is an example of a Microvitec CUB monitor using a 6-pin socket for TTL video: 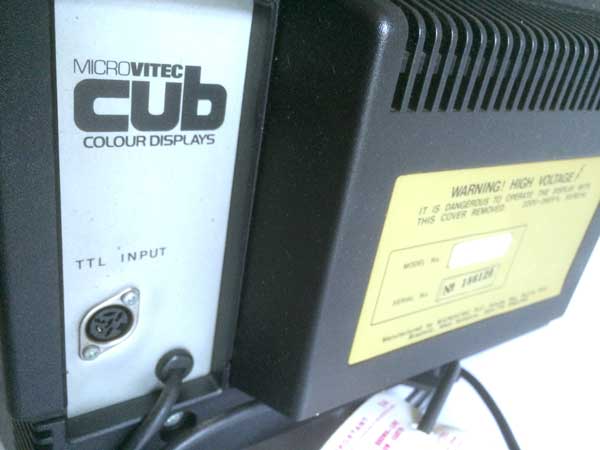 Other manufacturers, such as Philips(*1), used an 8-pin DIN socket. There was little standardisation of the pinout for either of these connectors, just like there was no standard connector on the computer end. The usual advice for customers was to "ask your dealer" if they had a suitable cable, or if they could make one for you. (A benefit of using off-the-shelf DIN connectors.)

High resolution monochrome monitors would typically use a phono (RCA) or BNC connector. Some monitors supported more than one type of input.

As computers started to use non-TTL (i.e. linear or analogue) RGB colour, manufacturers could support both by adding a second connector on the rear of the monitor. At first this was done with a second DIN connector, but as the SCART standard (which supported analogue RGB) became popular in Europe, they too were used. Here's the back of a Phillips CM8833, which supports monochrome/composite video (Input I) as well as TTL RGB via DIN connector or analogue RGB via SCART: 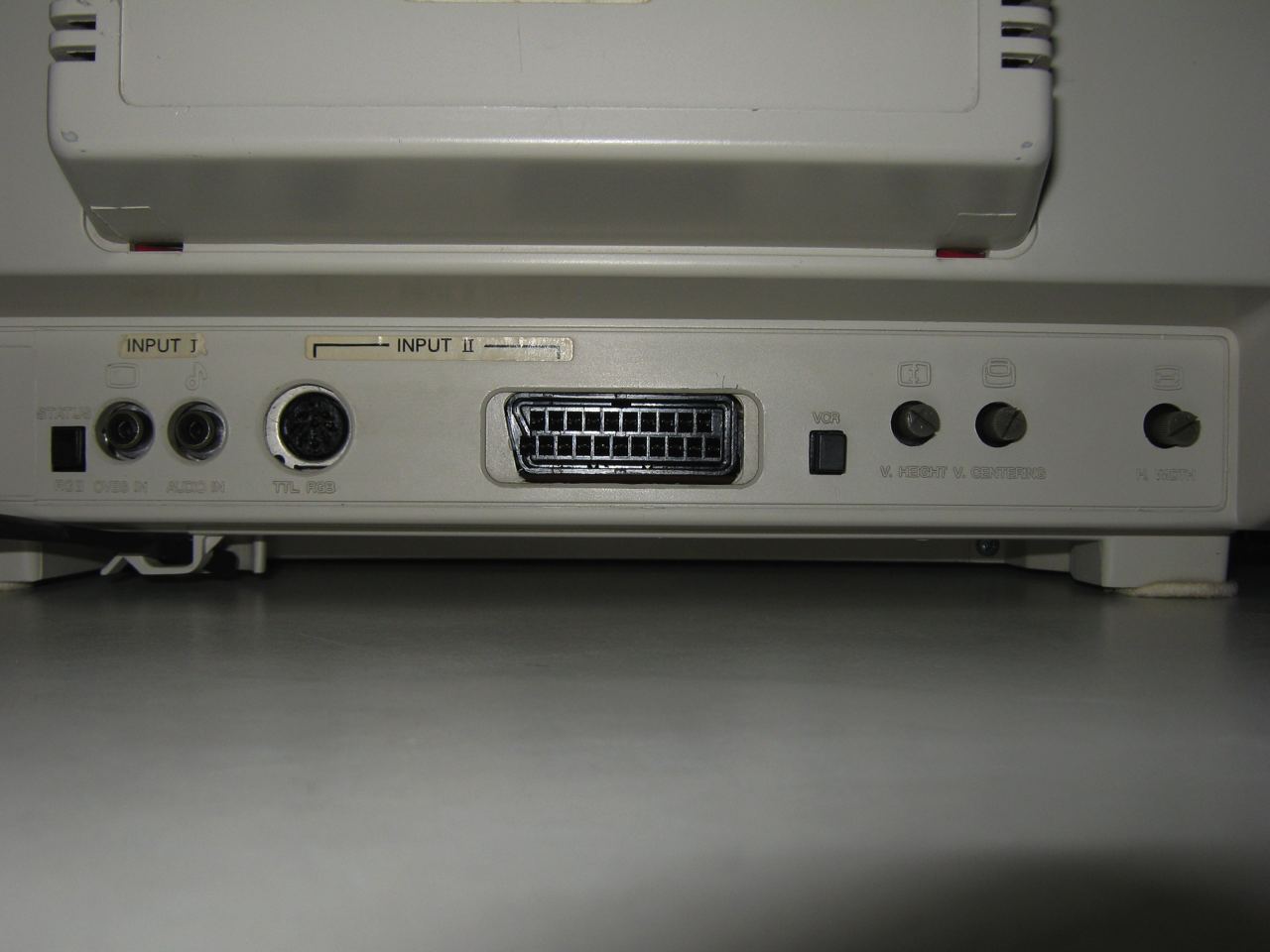 The use of DIN connectors for video fell out of fashion after the end of the 8-bit era, with D-sub connectors becoming more prevalent. Philips released a revised CM8833-II which replaced the DIN and SCART connectors with a single DE-9 connector, with a toggle switch to select analogue or TTL input levels.

SCART and RCA composite connectors were also found on contemporary TVs, but DIN and D-sub connectors were rare or non-existent. DE-15 (VGA) connectors didn't become common until TVs had switched over to LCD displays, which takes us beyond the "retro" era.

TVs of the area before video recorders, satellite receivers etc became common and worked best with a baseband video connection, did have little reason to offer such a connection.

Neither would such a connection have been trivial to implement or retrofit. TVs of that era were very commonly of a so called live chassis design, which made it very difficult to provide for any DC or AF coupled external connections at all (anyone touching a wire connected to such a port would stand a high chance of getting bit!).

I still have a small CRT TV in my house (belongs to my landlord) which has a composite video input on the front (which can still be used with a Raspberry Pi), and a SCART socket on the back. The latter is used with a digital TV receiver, as the analogue TV signal has long since been switched off. For context, this is in Finland.

In the UK, I remember the Microvitec Cub monitor being nearly ubiquitous in schools throughout the 1980s and, to a lesser extent, into the 1990s. This had an RGB component input in PAL timings, and essentially went with the equally ubiquitous BBC Micro. At home we also had a BBC Micro, and a somewhat better RGB monitor to go with it.

If you didn't have an RGB monitor, or your computer didn't have a component RGB output with a sensible cable available (I'm looking at you, ZX Spectrum family), the usual solution was a UHF modulator and a Y-splitter to incorporate the rooftop antenna signal. The TV then had to have a spare channel tuned to the computer.

The major exception to this rule was the IBM PC clone family, which had 9-pin CGA/EGA and then the now familiar 15-pin VGA outputs. The latter was adopted by later home computers such as the Acorn RiscPC, while the Acorn-built BBC A3000 of 1989 seems to have had both a composite video and a 9-pin EGA output.

Not the answer you're looking for? Browse other questions tagged video vga s-video scart cga or ask your own question.

5
Why not SCART for early color monitors
7
Is "component video" synonymous with "RGB"?

15
With a 15 kHz video signal (240p or 480i), does VGA have any real-world advantage over S-Video?
4
Which graphics adapters outputted S-Video over VGA?
16
Is the s-video output on the Commodore 64 different from "normal" s-video?
2
What are the HSync and VSync frequencies of these common VGA tweak modes?
4
Atari 1040ST AV video output - blurred and jagged vertical edges
5
Sony PVM Connections / Composite Signale
4
Is it possible to convert a Tandy 1000 EX video signal to SCART?
4
Is a S-VIDEO-to-RCA cable worse video signal quality than an S-VIDEO-to-SCART cable?
16
What is an XRGB video signal? (NOT the modern XRGB mini-DIN.)