Size of the PDP-8

What is the physical size of a PDP-8? The photographs I found seem to be evenly divided between showing it as a compact unit that looks maybe one foot high, and as a tall cabinet maybe five or six feet high.

Conjecture: the different sizes correspond to different models (maybe the smaller one is the PDP-8S?)

Conjecture: the computer itself is always the smaller box, but the tall cabinet contains that plus peripherals such as disk and tape drives. (In that case, is the core memory included in the small box?)

Which of these is correct?

From the Feb '66 maintenance manual: 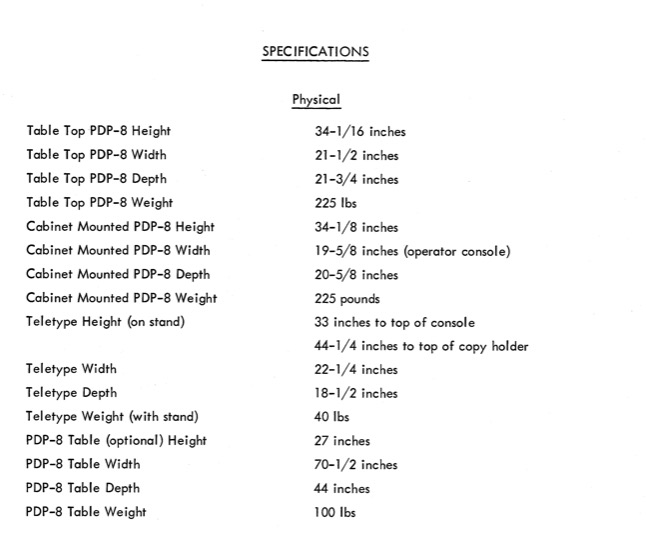 There were different models of the PDP-8, but most models (say, PDP-8/E) consisted of a number of rackmounted boxes, one of which you could call the CPU (or, compared to a modern PC, maybe the motherboard is a better comparison).

Here and here are some good pictures.

The unit shown with the front panel in the typical orange/yellow colors containing the switches and lights, which were more or less directly connected to the data and address bus, contains a number of connectors on a backplane, which can be populated with cards about the size of a modern motherboard. You can see part of the backplane in the second link.

The first card controls the front panel, there are several cards that make up the CPU, and again several cards for the memory (a controller and the core memory itself). After that come cards for peripherals, and it was also possible to extend the backplane into a second module for even more peripherals IIRC.

Some peripherals did have a considerable amount of logic in their own units.

There was also a (quite large, on the 8/E) unit for the power supply.

If I should call something the "PDP-8 computer", I'd have used that name for the whole rack, including the peripherals in the rack, excluding the teletypes and printers that were connected with cables to it.

Later, there were also desktop versions of the PDP-8 (the DECMates), when the whole CPU had been miniaturized to a single chip, and it could be integrated into a video terminal.

It is most likely, based on sales numbers, that you're describing a PDP-8/e or PDP-8/I. What you're seeing is just the front panel. The PDP-8/e front panel is 10.5 inches high (PDF!), or 6 rack units. The PDP-8/I front panel is a bit shorter, 5U high, or 8.75 inches. Another way to come to these values is by inference from the fact that DEC used standard 19 inch wide racks, that being the width of a panel mounted across the front of the rack. You can get an accurate aspect ratio from an undistorted photograph, which lets you determine panel height.

The front panel on the earliest PDP-8s was a separate unit, only a few inches deep, since it's only the switches, indicators, enclosure, and direct support electronics.¹ Indeed, some PDP-8s offered a choice of different front panels, such as a version with very few switches and indicators for embedded applications.

Early rack-mounted PDP-8s were made of many separate components, interconnected with ribbon cables and wiring harnesses, so the layout within the rack cabinet was flexible. The front panel was connected to the CPU proper and the power supply in this way.

Let's get concrete and focus on the PDP-8/I, the model I'm most familiar with.² Here's a dimension diagram from the PDP-8/I Maintenance Manual, volume 1, page 2-2: 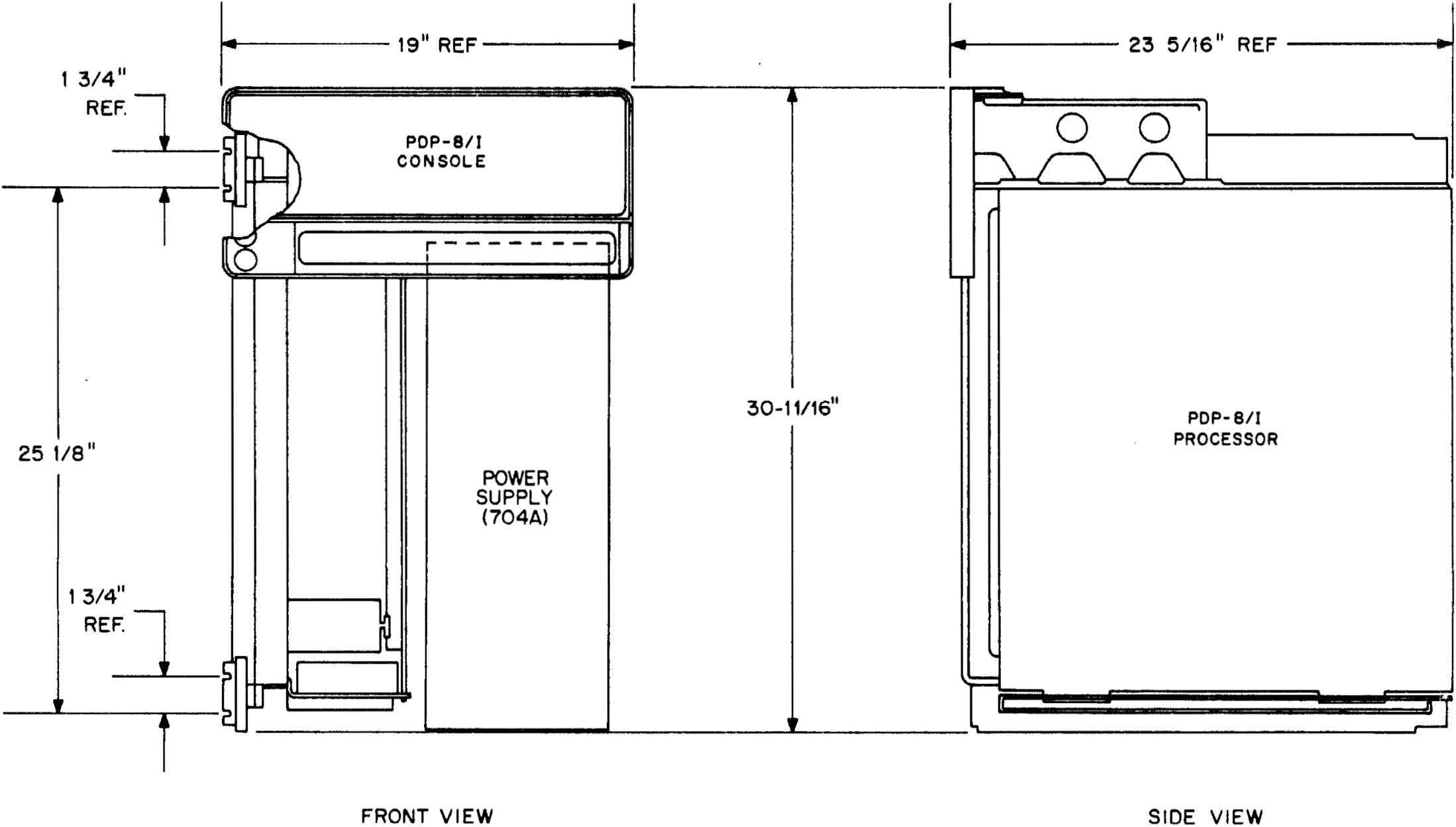 The "console" in the diagram's upper left corner is what I've been calling the "front panel," and it's often all that's shown when you search for a picture of a PDP-8/I, even though it's really only one small-ish part of the whole computer. It's the sexy bit.³

As you can see in the diagram, some of the space left behind the front panel is taken up by the top end of the CPU proper, which was roughly 2 feet high by two feet deep and took up about half the rack width. The other half of that space was taken by the power supply.⁴ You can see that layout in these photographs. The diagram doesn't show the core memory as a separate component, since it was mounted within the processor chassis.⁵

Over their two decade span of development (1965-1985) PDP-8s moved from discrete transistors to ICs, then to denser and denser ICs, so they became smaller and more power-efficient. By the time of the PDP-8/e (1970), the CPU, core memory, power supply, and expansion slots were entirely behind the front panel. Its close relatives the PDP-8/f and 8/m used shallower chassis, but were the same basic idea.⁶ These systems were only self-contained within that 6U space if your application didn't require any sort of durable storage or I/O peripherals; add that in, and you're still talking about taking over a large portion of a full-size rack, at least.

The front panel would usually be mounted about halfway up the rack, since that's a convenient height for a seated person, who would normally sit at a Teletype Model 33 ASR, the standard terminal for DEC computers of the time. Since this is an essential component in many PDP-8 systems, it should also be considered part of the size of the computer: it's roughly the same width and depth as a rack cabinet, and about half the height. (Source)

The rack cabinets usually used for PDP-8s were 5 or 6 feet high. The rest of the space in the CPU rack would be used for peripherals: TU56 DECtape drives, RK05 removable platter hard disks, etc.

It was not uncommon for a PDP-8 computer of the era to require a second rack for more peripherals: A/D conversion hardware, paper tape punch/reader units, more tape and disk storage, etc.

Eventually, the PDP-8 escaped the rack with the DECmate series, which packed a single-IC PDP-8 CPU, memory and a dual floppy drive into a large video terminal cabinet, not unlike early consumer-focused microcomputers.

The original (straight) 8 is a fancy shaped box of about 2 ft wide, 3 ft height and 2 ft deep.

Later models where mostly standard 19" rackmount boxes, roughly 2x1x3 ft3 until the last ones made that like 'half height' of ~6 inches.

So yes, different sizes correspond to different models over time.

And yes again, the racks usually shown are whole machines, including peripherals like Disks, Tapes and so on in addition to the CPU. After all, the open modular concept was one of the main advantages of the PDP-8 and -11 series.

Before the PDP-8/e, two other models of the PDP-8 had their electronics all fitting entirely beind the front panel. The PDP-8/S, which arrived shortly after the original PDP-8, was in this category; however, because it used a serial arithmetic unit, it was slow and of limited popularity. The PDP-8/L, a computer using the same technology as the PDP-8/I, but with fewer available options, also had its logic behind the front panel.

Not the answer you're looking for? Browse other questions tagged pdp-8 or ask your own question.

15
Conditional skip instructions of the PDP-8
7
Arithmetic operations on multiple words on the PDP-8
10
How did the PDP-8 handle strings?
12
PDP-8 transistor count
4
Does the Intersil 6100 do interrupts differently from other PDP-8s?
8
Are there any PDP-8 assemblers that create linkable object files?
5
In what way does the Straight-8 expand on the PDP-5?
13
Was the MC6800 a PDP-11 or PDP-8?