Which ports are which on this Soviet ZX Spectrum clone?

Today I got my (first) Soviet ZX Spectrum clone. The person who sold it to me had inherited it and had no idea how it worked.

It seems to be a home-made clone, rather than a factory-built one. See picture in case I'm wrong about this: 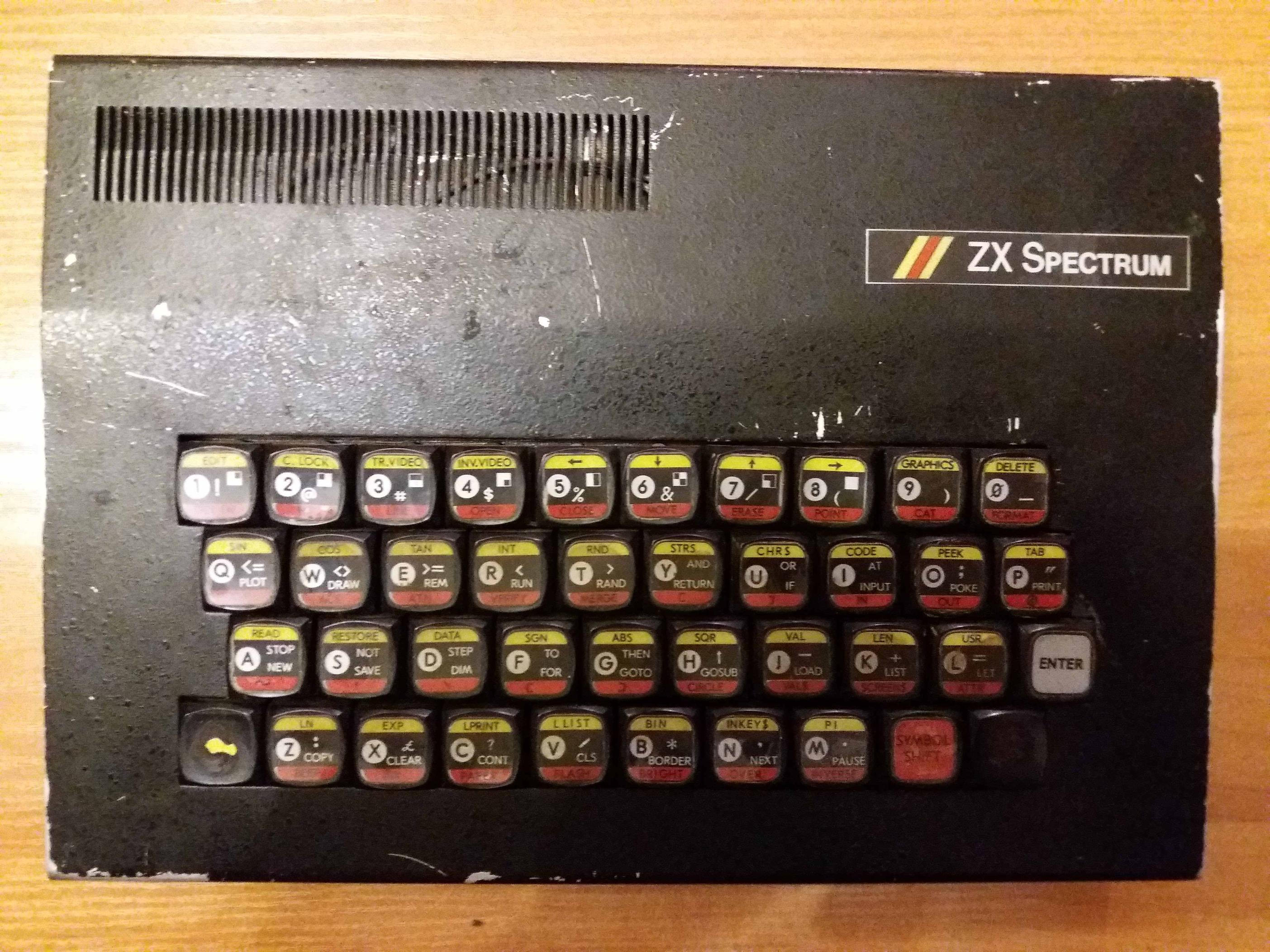 I have looked at the most similar ones I could find online, but the ports seem to be in an unpredictable order on different clones. I show them upside down here to match the subsequent picture from the inside of the machine. I take it the port with the (in fact upside down) T is the electricity adapter socket, but would value confirmation of this before I fry the computer by plugging the electricity adapter (which I have) into the wrong place. 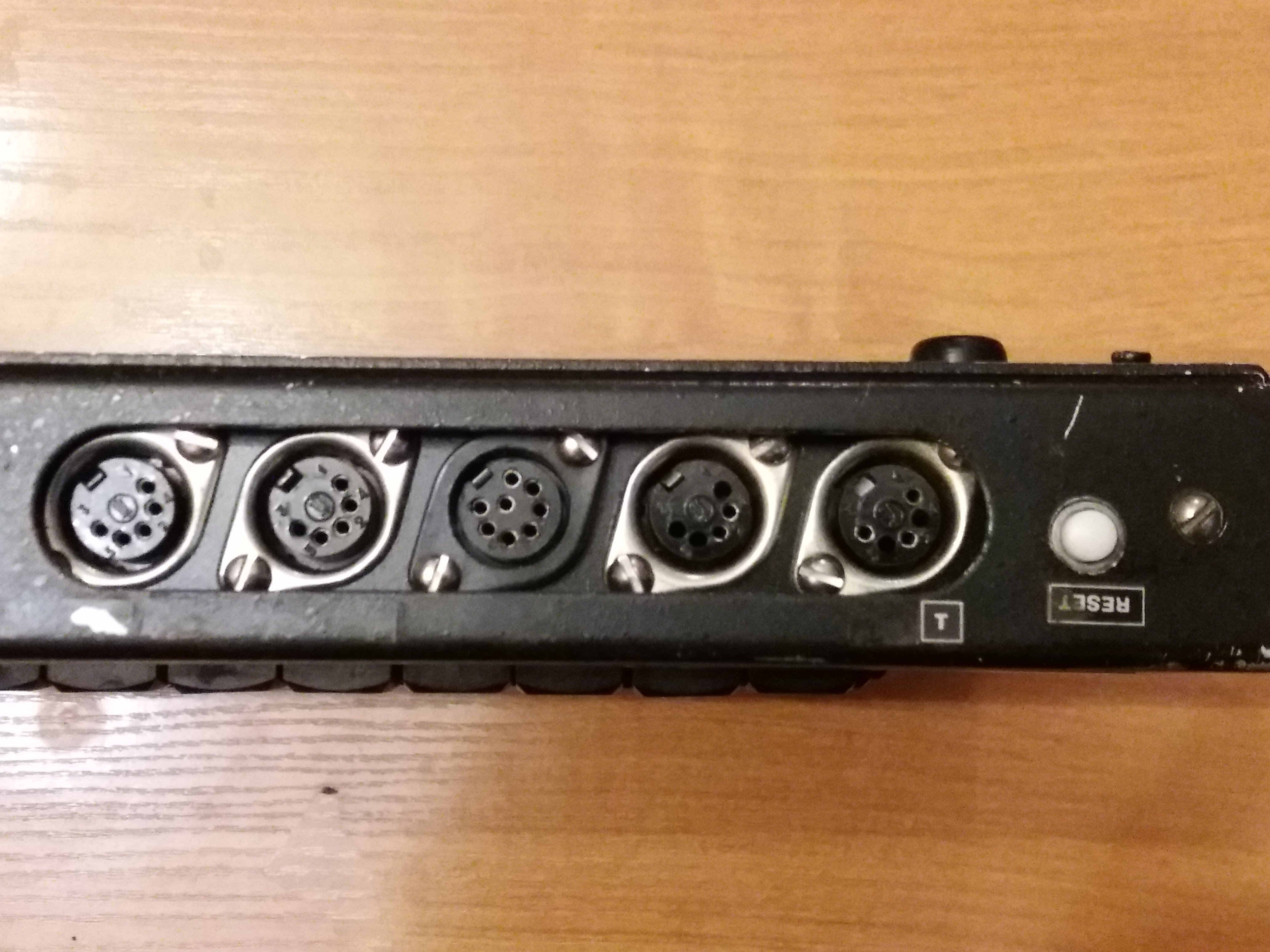 Here is a picture of the ports as they are connected to the motherboard. As in the previous picture, the reset button is on the far right. 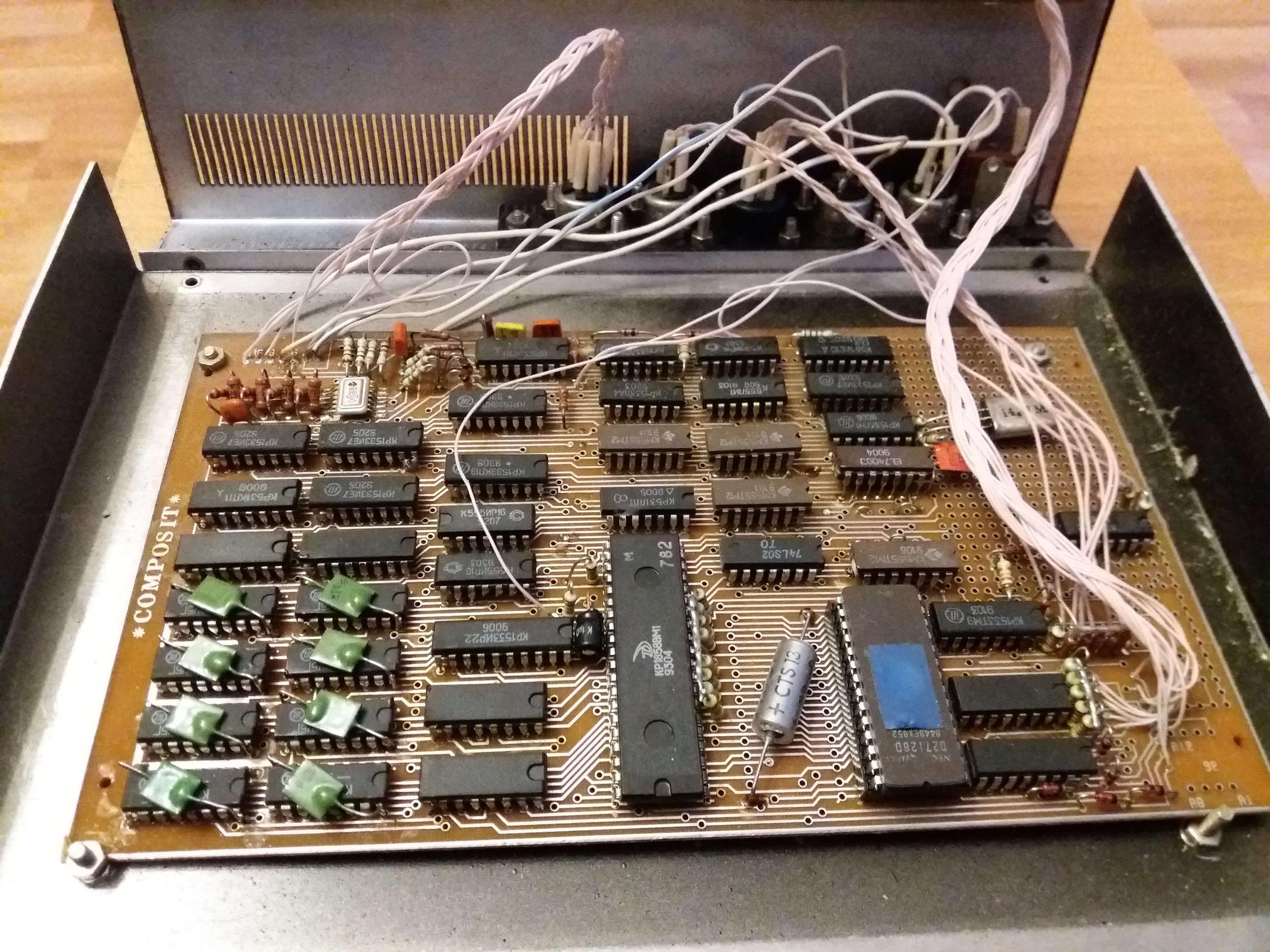 And here are the ports up close from the inside. Again, I'm guessing the two thicker wires connected to the port next to the reset button confirm that it is the electricity adapter. 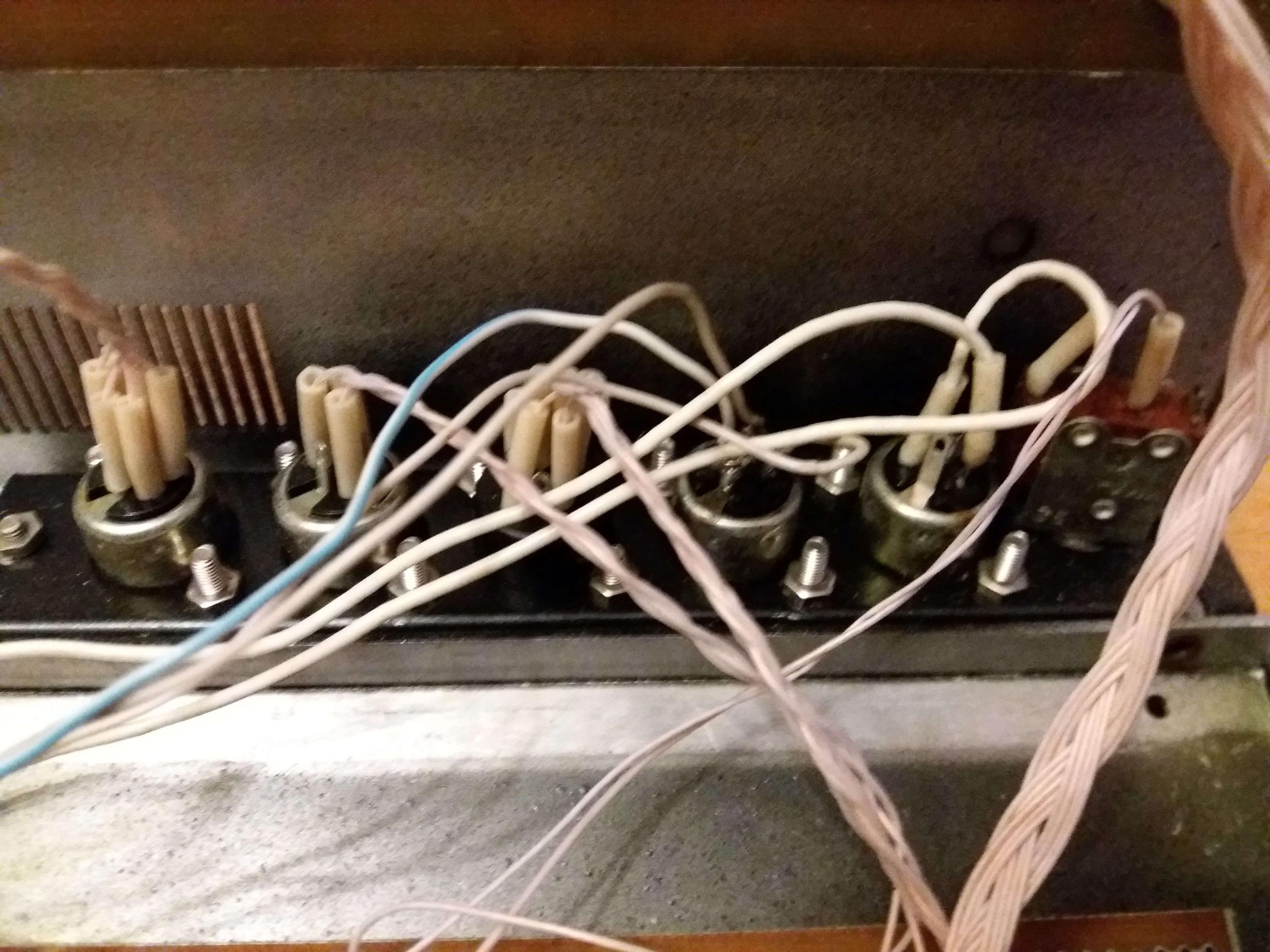 So my question is - can anyone with more knowledge of Spectrum (clone) architecture and/or electronics confirm that the port next to the reset button is the electricity adapter, and divine what the other ones are? For practical purposes, the monitor / TV out and EAR would be the most useful ones, though I take it these Soviet clones often had things like joystick ports, and I got a five-pin joystick together with this purchase.

I should say that all the cables I have are five pin (DIN?), and though the middle port is seven pin, I've already experienced successfully using a five pin cable with a seven pin port (on my Elekronika BK-0010-01).

No need for any special Spectrum knowledge. It's about power, and there is no rectifying, no appropriate sized capacitor and voltage control elements on this board, so it most definitely does not take AC but rather some well regulated DC input. I'd assume 5V. So operating it at some arbitrary AC and higher voltage my fry it right away.

Usually the start would be some laboratory PS (always a good investment if you plan to play with old stuff. And don't buy cheap here). But in times of need some USB charger might as well work for 5V (*1). Clip the connector, detect the orientation.

In either case, look at the board if there are markings for ground or +5V. If lost, take a look at the chips. For example all RAMs typically have their ground on pin 16 - the top rightmost pin (mark on top). See where these traces are going and connect to the power lines, and you've got ground. Now you already can't damage polarity. Next is finding the +5V (*1).

Since all is wired with single white wires (*2) and connected to various parts of the board, it's your turn to follow all of them, as the pictures don't really reveal a lot. Adding some highres from direct above and below the board might allow others to help.

SU computers often had external PS to reduce potential dangers within the device. In fact, school installations more often than not had central 5V or 12V routed to each desk, so the pupils only had contact to low voltage.

What you got there is a LENINGRAD-1 board produced by Tachion (тахион) in Leningrad - today's St.Petersburg. The board was designed by Sergeij Zonow around 1988, who then founded Tachion to mass produce it and sell it to companies building their own versions of the Spectrum or hobbyists fitting them in home made cases. The resulting machines had many names and designs. Like Delta-N, Rita or Jaguna and endless variations of ZX/Specy/Spectrum in English, Russian or mixtures thereof and many regional names like Dubna, Leningrad, Ural, Krasnojarsk, Moskow, and so on.

The Spectrum was in Russia like the VC20 or C64 over here ... in fact even more so, as it was, until the late 90s the eastern European machine. The scene was exploding from like 1988 to the mid 1990. There were literally hundreds of meetings each month. And the Leningrad board was at the core of this movement. It also was that movement that inspired the Selenograd chip works to create a ULA equivalent to allow further integration. Selenograd was also the place doing the Z80 clones for the SU using East German technology.

*1 - Not sure, but I think I remember the Spectrum also needed +12V. The connector seams to have 3 pins, but looking at the picture I can only see two wires. Also from other details I'd say this board seams to be designed for a single voltage.

*2 - Reminds me of the floppy drive for the Estonian Juku 5101 computer. A simple enclosure for two 5¼ inch drives, but instead of flat ribbon, the connectors were wired individually all white wires. A hell of a work for a mass-produced machine, and even more so to debug.

Looking at the linked schematic and the photo of the internals, I'd say the ports are the following (listed from the reset switch over)

The port with the two thicker wires is almost certainly the power, as you identified, backed up by the "upside-down T" symbol on the back of the case indicating the ground pin. You'd have to show the underside of the board to be sure though.

The tape port and joystick go to the same part of the board as the wires from the keyboard, indicating all the I/O is over in that area. The tape port would be three wires (in, out, ground), and the joystick port with 6 wires (4 directions, button, +5 volts).

Only you can decide which port is which as you are the only one with access to your HW. I would use multi-meter and or short circuit tester:

Anyway all the ports pinouts you need trace to the IC chips they are interconnected with/to.

The electrolytic capacitor I marked with red is most likely the power supply filtration (most likely connected to +5V and GND) for the whole computer and the design looks pretty old RVHP style so it is most likely dried out already and should be changed (otherwise you risk random reset or crashes of your computer). I see only one other electrolyte (on the opposite side of CPU) small black cylinder that might need to change too but it looks much newer and also it most likely is not that important (my guess it is just CPU power up reset circuit reseting the CPU when you plug in/turn on the power supply) but that is just my guess.

Well as mnem and jules pointed out there might not be an ULA present there is another way to identify the video. Simply plug in the power and hook up an oscilloscope to the port. Look for video signal there. To make this easier try to blindly program Border color different than white in BASIC. Now you are looking for signals with specific frequencies and shape. See PAL video timing specification. So measure each pin of the undetermined ports and deduce from shape, voltage levels and frequency what the pin is. Flat lines are usually just shield or GND or inputs.

Sound output can be deduced similarly ... just try looping some BEEP in basic and look for sound square wave output with hear-able frequency.

I know coding in Basic blindly is not easy but it is doable I did it before with my ZX clone :) ... You can train on different machine or in emulator ... 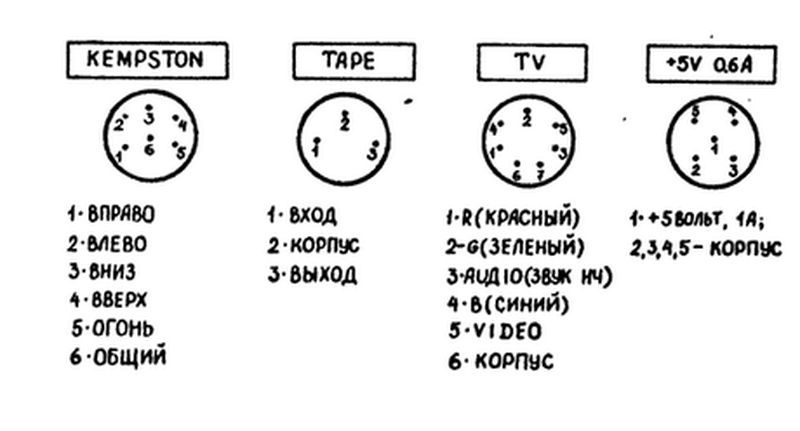 The circuit board is similar to Leningrad-1. http://sblive.narod.ru/ZX-Spectrum/Leningrad48k/Leningrad48k.htm 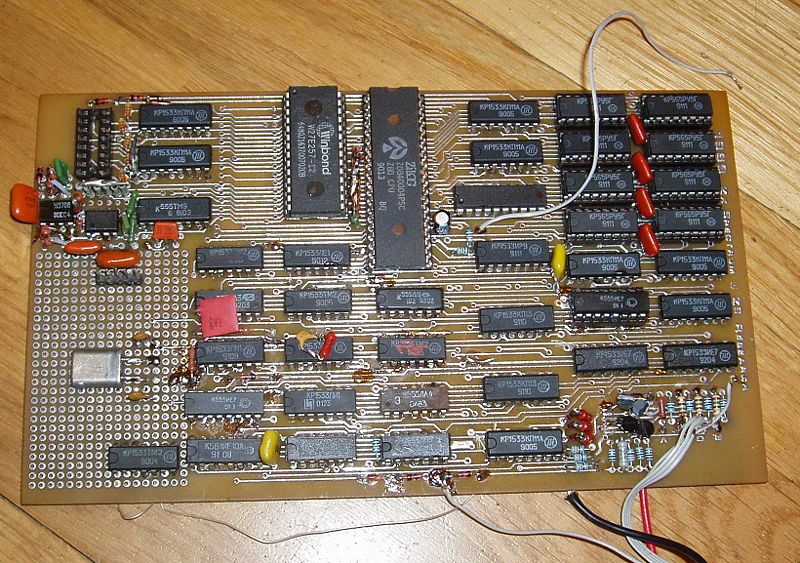 You can power the board from any widespread USB charger, 2A would be enough. Trace common power pins (ground: pin 7 at any DIP14 IC or pin 8 at any DIP16 IC, 5v: pin 14 or pin 16) to the one of the connectors (SUPPOSEDLY that is DIN-3 one) and then build the cable from any USB cable, using DIN-5 or DIN-3 male plug.

Not the answer you're looking for? Browse other questions tagged hardware zx-spectrum ussr zx-spectrum-clones clone or ask your own question.

16
How and why did the ZX Spectrum use so many voltages?

37
Can a USR command damage a ZX Spectrum?
16
What PC “Clone” technology standards were introduced by clone manufacturers?
13
What are tacts in the context of ZX Spectrum systems?
17
How to create a switchless multi-system 2 button Atari joystick?
1
ZX Spectrum fault
8
How compatible is the Leningrad clone with the “original” ZX Spectrum?
5
Can a Harlequin ZX Spectrum clone be modifed to run CP/M?
5
Why am I not seeing the results of several operations on this “Microtrainer”?
3
Where can this “boot.B” file be coming from on this Spectrum TR-DOS disk image?
2
Are the last 4 bytes in .SCL disk image files for Spectrum clones meaningful or spurious?