What is the (usually lower quality) “software rendering” mode visible in so many “second-generation” FPS games?

During a conversation, a friend of mine sent me this picture: 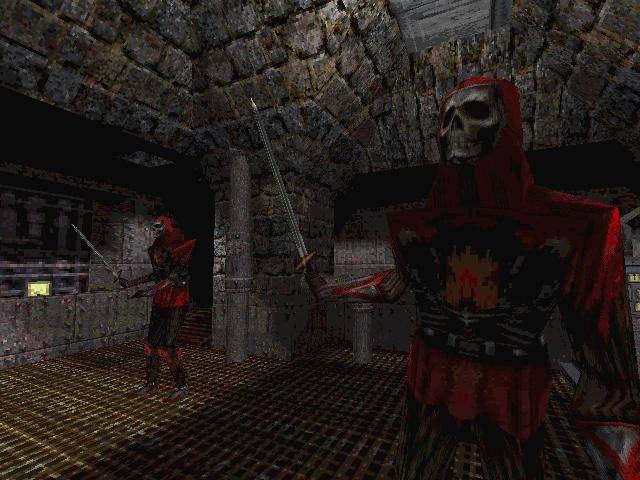 It's the first Thief (I guess), with so-called software rendering.

I already experienced this effect in Quake 1-2 and to an extent, in Shogo: M.A.D., but never actually understood, what it is.

How these settings work, why they produce lower quality and why it diseppeared after the millenia?

The Mode is called software rendering, because the program is painting all pixels with the CPU. So you are not using a 3D-Interface like OpenGL or DirectX (which interfaces with 3D-hardware) but set single Pixels (aka Bytes) in a framebuffer(a rectangle part of your Memory you usually copy to your Graphics card)

Why is it so ugly?

Because the CPU was busy painting the triangles with (sometimes affine) texturemapping into the memory. There was simply no time to do transparency (which needs reading the already painted pixel and multiplying!) or antialiasing(which is even more costly).

Then the specific flaws you're seeing in that image — to answer "why they produce lower quality" — are lack of texture filtering and very harsh geometry edges.

When deciding which colour to make a screen pixel, both the CPU and the GPU know which point on the original textured surface is visible there. That's where processing diverges. It is very unlikely that the point on the original surface falls exactly on the centre of a pixel in the texture.

That's far too much work for a CPU. So it just figures out which source pixel is closest to the point and outputs that.

The difference is between textures that when stretched too large obviously show their individual pixels as boxes, and surfaces that just look very blurry.

In that era, harsher geometry edges result from the CPU just not being fast enough to draw the same number of pixels as a 3d accelerator. So a lower screen resolution is used. They also tend to run at a slower frame rate, which makes the effect more apparent. Several 3d accelerators of the period support edge blending as a way to eliminate rough edges, which uses per-pixel weighted transparency on each edge pixel, but that's not as useful as it sounds because it presupposes you're drawing all geometry from back to front and therefore doesn't interact very well with engines built around z-buffering.

The posted screenshot doesn't show these problems, but other divergences you might see in contemporaneous titles:

OpenGL, Direct3D and so on take advantage of hardware 3D accelerators which can draw 3D scenes much more quickly than the CPU can do by itself. So to maintain acceptable frame rates, scenes rendered in software with the CPU must be much more simple (easier on the CPU) than scenes rendered in hardware.

Not the answer you're looking for? Browse other questions tagged history graphics software gaming or ask your own question.