How do high-resolution graphics work on the ZX81?

The ZX81 has a display file which is treated rather like a serial file. And the CPU generates addresses which the ULA uses to look up the characters' bitmaps from the ROM (Yes, I know the actual explanation is rather more complicated than this). I imagined that this arrangement means that the byte in the serial file really must correspond to one characters, so that the appropriate part of the bitmap will get sent to the raster beam; there can't be any way to get the byte in the display file to be sent to the raster beam.

Yet, Some demos really do seem to address individual pixels. I've seen a video of Manic Miner, and a demo called "No Limits" which seem to make some kind of bitmap at a resolution of 256x192.

The normal process is:

CPU attempts to fetch an op-code instruction byte from the video file. ULA steals that byte as a character code and feeds the CPU a NOP op-code byte instead. Immediately following that is a refresh cycle. The ULA uses the top part of the refresh address but substitutes the character code just read and the contents of an internal three-bit counter at the bottom to form a ROM address. Hence, a row of a character pattern is returned. It ends up in a shift register within the ULA and becomes video.

All RAM is static, so this misuse of the refresh cycle isn't problematic.

The three-bit counter can be reset by software, as can the top part of the refresh address — the Z80 uses the I register for it. For Manic Miner and some other titles, the trick is simply to point to an existing region of the ROM that has close to the full 64 range of possible characters sufficiently close to each other, reset the three-bit counter every line and use a mapping table. You'll notice it's not exactly perfectly mapped; weird distortions occur. That's partly because of the mapping from 256 input values to 64 character codes and partly because there's nowhere in the ROM that has all 64 possible byte sufficiently values near each other. So the game does its best.

Not all third-party RAM expansions respond to the refresh cycle but it's usually a simple modification and most do, anyway.

To follow along on a schematic, see e.g. the one redrawn by Ron Reuter available from here: 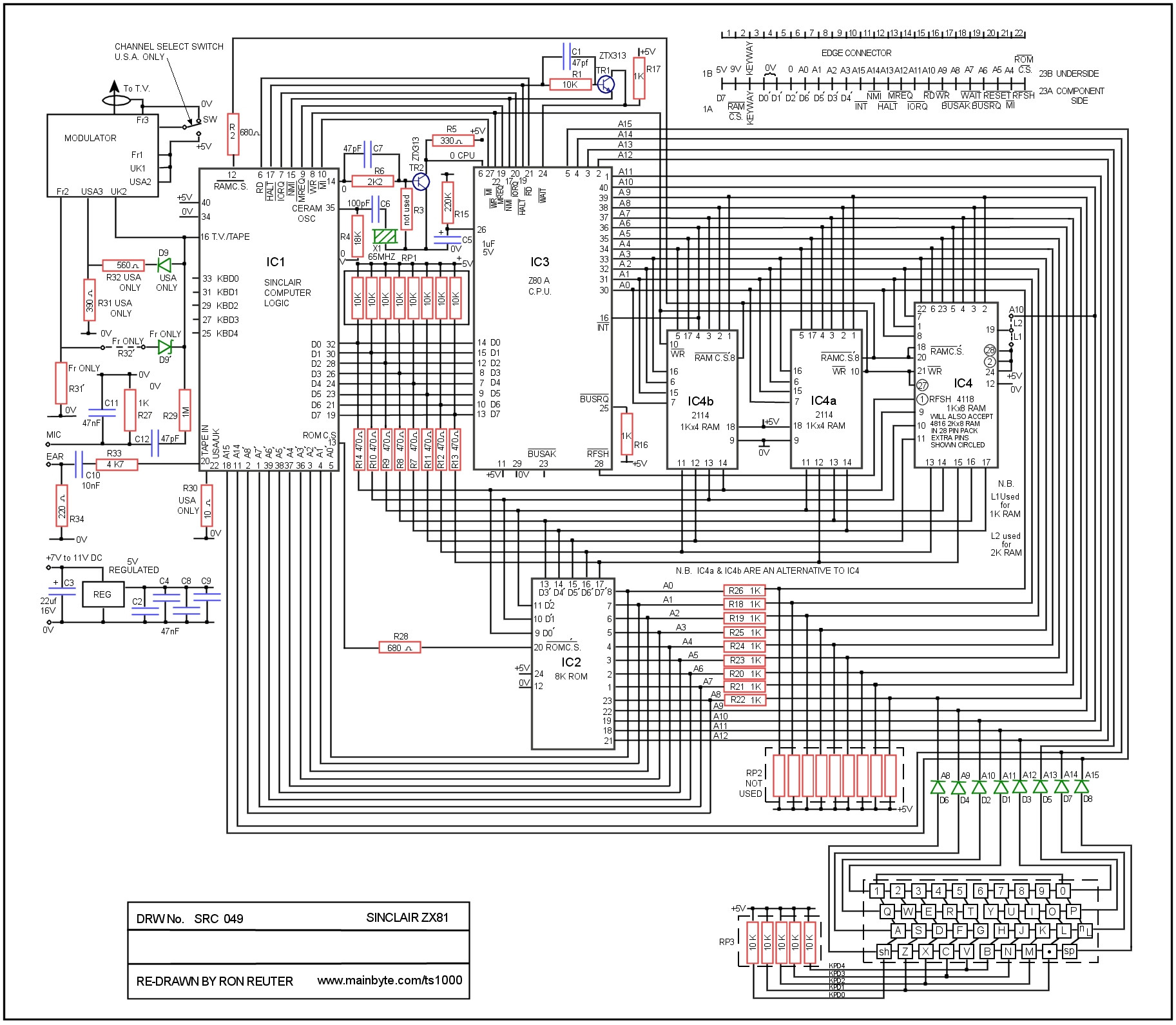 The ROM is IC2, has its low nine address pins (three for the row counter, six for the character code) connected both to address lines coming out of IC1, the ULA, and IC3, the Z80. Resistors R18–R26 prevent the ULA's address input from flowing back towards the Z80. As both the internal RAM and the expansion port are on the same side of those resistors as the Z80, they see the address the Z80 is generating only — they're unaffected by the ULA. It's almost a prototype of the ZX Spectrum's floating bus.

Chip selects are generated by the ULA; luckily they're independent of whether it knows it is expecting a character graphic. So when the generated refresh address is in RAM rather than ROM, the RAM chip select is active and the ROM isn't, and the ULA's mutation of the refresh address isn't visible to the RAM.

Not the answer you're looking for? Browse other questions tagged graphics zx81 or ask your own question.

18
How do CGA emulators for Hercules graphics work?
11
How can a peripheral work on both the ZX81 and on the ZX Spectrum?
6
High-end PC graphics circa 1990?
5
(How) can I boost my ZX81 video output with an external device?
3
What does the ZX81 ULA use A14 and A15 for?
1
How does the ZX81 ULA generate a full ROM read address?
10
Why did the ZX81 16K RAM pack use two PCBs?
9
What are principles of vector CRT display? Simplest way to drive CRTs?
10
How did ZX81 assembly debuggers implement breakpoints?