Identifying a game from probably the 80s

I am trying to identify a game from presumably the 80s. It was played with at least two players. Each player could set "balls" or "chips" on a 2 dimensional gameboard.

The balls or chips could be stacked, this stacking had a direct effect on adjacent chips set by the other player.

If e.g. 4 balls were set, the chips north, south, east and west got the player's color, the ultimate goal was to kick all opponents by transforming their stones.

It sounds like you're describing the game Atoms for the Amiga. It was common on magazine coverdisks and public domain collections in the 90s. 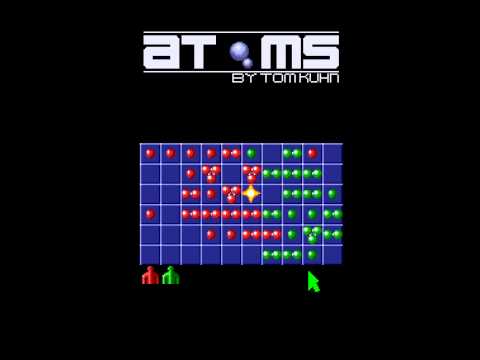 In this image, the explosion represents a fully occupied cell. The four atoms that were present in it will be added to the adjacent cells, turning them green. If any of those cells (such as the ones North and West) become fully occupied as a result, they will in turn explode.

I can fill in some of the early history of the game Exploding Atoms.

The original concept (so far as I know) was a board game concept published in a British Magazine called Games & Puzzles some time in the late 1970s. I don't think the magazines are available online but boardgamegeek.com has a list of articles and I think it was Explosion in issue 55 (December 1976) published in the Playroom section which carried readers ideas for games.

The first computer version of the game (unless anyone wants to disagree) was written by me in 1979-80 for the Sharp MZ-80K and published by Knights Computers in Aberdeen. In 1979 I was a school kid mad about programming and I wanted to write a game from scratch. This is the one I chose and despite being chosen primarily as being something within my programming skills it turned out to be very popular.

Here's a review of the MZ-80K version from a 1982 computer magazine:

The game is about overloading squares. Corner squares overload with two counters, edge squares with three and the centre squares with four. Observant readers will have noticed that these figures correspond to the number of adjacent squares to each type. This is because an overloaded square explodes, sending one counter into each of the squares around it.

And if this causes an adjacent square to overload then that too will explode and it is in this way that a chain reaction can begin. If your counters explode into a square containing your opponent's counters then that square is turned to your ownership. After some initial sparring, the game quickly becomes critical as each player tries to begin the reaction.

Critical because a miscalculation which leaves just one opponent counter standing is usually fatal! Exploding Atoms comes on the same cassette as Startrek and 3-D Maze it costs £8.00 from Aberdeen-based Knights T.V. and Computers.

To the best of my knowledge all of the later programs can ultimately trace their heritage back to this version. (Just their heritage, I really hope none of them copied my schoolboy code.) Or, of course, maybe they also read the same games magazines as I did.

Critical Mass is a type-in game featured in Computer & Video Games issue 15 (January 1983). Originally for the TRS-80, but I ported it to run on a Spectrum and I dare say others did similar things at the time.

The description from the magazine text:

It's a two player game based on a board game called Explosion [...] You are presented with a 6x6 grid and each player in turn introduces one of his counters either onto an empty square or a square occupied by one or more of his own counters. However, each square has a point at which critical mass is reached and fission occurs. Corner squares explode when two counters are on them, side squares explode when containing three counters, central squares go up when four counters occupy their space.
When an explosion occurs the counters on the exploding square are distributed across the board. Any enemy counters on the latter square are captured and become counters belonging to the mover. Should receiving squares attain critical mass further explosions will result. Any player having no counters left at the end of his opponent's move is the loser.

This seems very similar to the answer posted by wizzwizz4, except played on a square grid rather than hexagonal, which seems more like the description in the question.

Was this game called Hexplode?

Hexplode was a type-in game for the BBC Micro, I think. I would provide more information, but the Wikipedia article on it was recently deleted and the only reimplementation of it that I know of has also been removed from the internet.

There were many variants of this with different board topologies.

Some pictures of one implementation (not the BBC Micro version):

I found a page which includes more information and a sample download: Hexplode v1.1

My older brother had a TRS-80 which he got for his University days, so that would have been in 1978-1982. I remember it was the first computer i saw, and he had this great game which we loved to play when we visited him (i was 11 at the time) which was CRITICAL MASS. It was brilliant - simple and very addictive. As described previously, it involved stacking counters on top of each other until they hit Critical Mass, then they would explode to the surrounding squares. I loved it, and have been looking for it ever since. No doubt i will see someone produce it for an Ipad or similar, i will download it and wonder what all the fuss was about - but in the early eighties, it was cutting edge !

Could it have been Hexxagon and/or its sequel? They were DOS games in which two players alternatively place pieces and each piece placed converts all its neighbours. 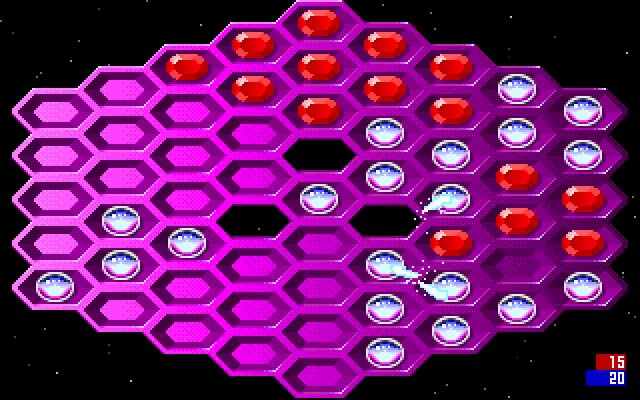 As per the comment below, this apparently has a rectangular predecessor in Ataxx. Is that an option?

4
Need help identifying an Apple IIc game/possibly educational with a top-down view
4
Game from the mid-nineties with hovering vehicles
6
Need help identifying math game where equations let you move from room to room?
11
Help identify old Apple game from 80s (Apple II, Apple IIGS)
2
Identifying an old game from the early 2000s
8
Did this game and computer system from Magnum PI exist?
2
80s game about running and maintaining a power station
2
Vertical shoot em up from early 80s
4
Looking for an educational game from long ago