Use of PSK for storage of data on audio tape

Most home computers of the 70s and early 80s were able to save and load data on audio cassettes. Typically, in order to do this they encoded the data using frequency shift keying (FSK), i.e. for a '1' bit they might write a certain number of cycles at a certain frequency, while for a '0' bit they may use a different frequency and a different number of cycles (typically arranged such that both forms took the same length of time to write).

An alternative to FSK is phase-shift keying (PSK), where instead of changing the frequency, the phase of the signal is altered. This has a number of theoretical advantages, including a tighter frequency spectrum for the same symbol rate. However, the circuitry required to use it is a little more complex (a phase-locked loop is practically required for this, which is a non-trivial circuit that I don't believe was readily available on standard ICs at the time). I know that at least one computer used it (the Soviet-built Vector-06C), but (1) were there others, and (2) did it actually achieve any useful benefits over the simpler and cheaper FSK that was more commonly used?

Both the Sinclair ZX Spectrum's and the Sinclair QL's microdrives (their microtape units, which are basically the same thing in both computers) use Differential Manchester Encoding to store data on the tape.

Obviously, these devices didn't actually use audio cassettes, but rather much smaller microdrive cartridges that contained (presumably) high-quality video tape. So, apologies if this only marginally answers your question.

Data is stored on alternate tracks. A 0 is encoded as a phase shift, a 1 as a non-shift. The microdrive encoding/decoding circuitry including the (assumed) PLL is realized in a custom ULA. 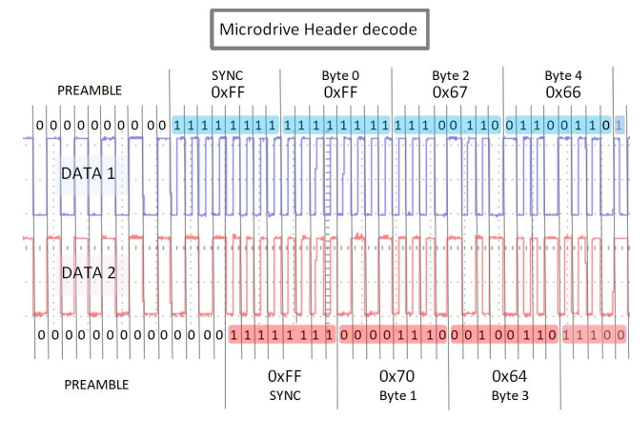 Not the answer you're looking for? Browse other questions tagged cassette-tape or ask your own question.