In the late 1970s, perhaps early 80s too, Radio Shack sold a sort of computer trainer kit. It had a hex keyboard and its output was primarily through a grid of LEDs on a raised stand.

I seem to recall this was also sold through other companies.

Does anyone recall this? My google-fu is failing me.

I think you're thinking of the Science fair microcomputer trainer:

which had a TMS1100 as the processor (if not there is the digital computer kit on the previous catalog page but I don't think that matches your description).

This page has some more details http://www.old-computers.com/museum/computer.asp?c=1053

The other options I can think of might be the MZ-40K from sharp, Micro-Professor MPF-1 or one of lots of other single board computers.

Going thru my junk box, I found the remains of a computer trainer that I think I got at Radio Shack. I attempted to hack it, but soon lost interest. 30+ years later I am ready to play around with it again. It used a TI MP1312 CPU. I think this may be the trainer in question. I cannot find any info on CPU.

Perhaps you are referring to the Heathkit ET-3400 microcomputer. 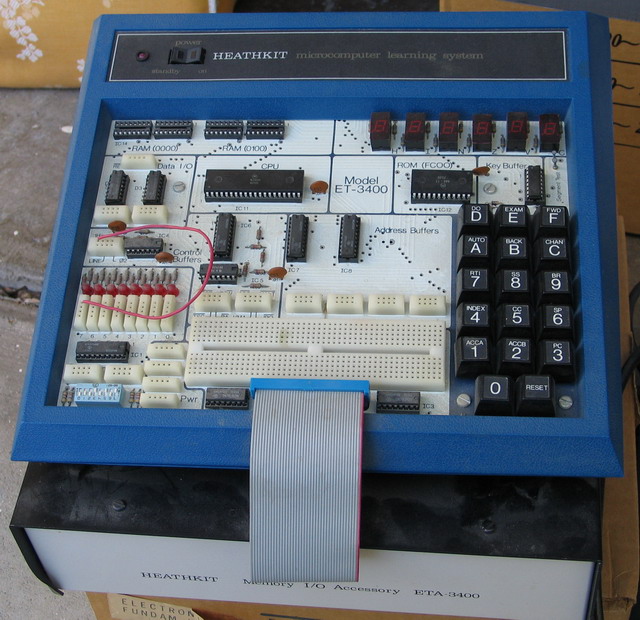 It has the hex pad, the line of LEDs on the left, and a few 7 segment displays. I don't see anything green, though.

Many Radio Shack stores were privately owned franchises, where they would carry additional items other than the standard Radio Shack fare (often TV repair shops). You may have seen a Heathkit/Zenith item in a store like this.

Not the answer you're looking for? Browse other questions tagged identify-this-computer radio-shack or ask your own question.

21
What computer was used in Weird Science?
11
Help identifying a very old computer: 1974, maybe an NCR
1
Which computer is used in this NCIS episode?
41
What kind of keyboard or computer am I typing on?
12
Does this computer have a steering wheel?
26
What's the terminal/home computer used as a prop in the computer school in Superman 3?
8
SAG Computer: What System is it?
2
Identify computer seen in Wikipedia
13
What is the name of this computer? (Bell Laboratories, 1954)