Reading both keyboard and joystick with non-KERNAL code on C64

I used to use the KERNAL SCNKEY routine earlier to read keyboard and it worked well with my joystick port 2 code. However, I had to bank out ROM to implement stable raster IRQs and now I'm reading the keyboard matrix directly using $dc00/$dc01 (code copied from http://codebase64.org/doku.php?id=base:scanning_the_keyboard_the_correct_and_non_kernal_way)

I noticed that if I save and restore $dc00 contents before/after calling the keyboard routine, joystick state works fine.

to preserve joystick state or is there some other way to do this? This worked fine on VICE but I haven't tried on real C64 HW yet.

I did try to read the KERNAL SCNKEY source code to see if they're doing a $dc00 save/restore and didn't find an obvious place where they'd be doing this register state save/restore.

JeremyP's answer is right about DDR regs. This code seems to work with joystick on port 2 and the keyboard code from http://codebase64.org/doku.php?id=base:scanning_the_keyboard_the_correct_and_non_kernal_way:

To get the information we need from the schematic, you don't need to understand anything special about electronics beyond switches and wires being connected together. We see below, for example, that pin PA1 on the CIA, COL1 on the keyboard connector, and JOYB1 on control port 2 are all connected together; all of these are part of the "COL1 line." 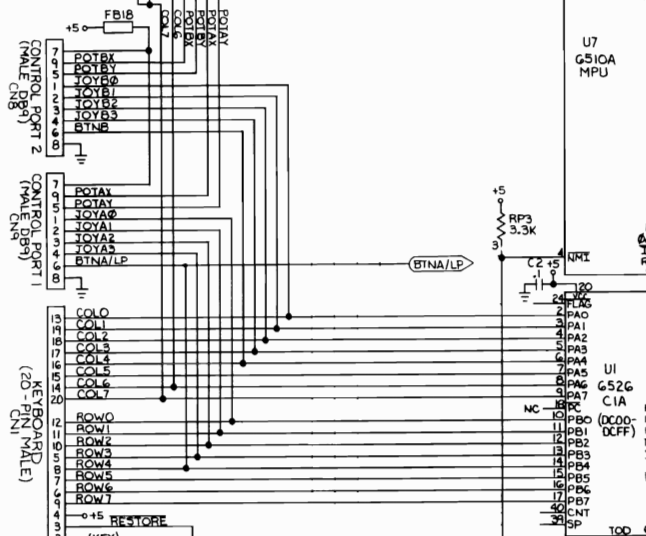 The joystick and keyboard wiring itself is not shown on the above diagram. Joysticks connected to the control ports have normally-open switches that short to ground when closed; e.g., pushing up on a joystick connected to port 1 would short pin 1 to pin 8 on the joystick connector, thus bringing the level of the ROW0 low. The keyboard keys connect COL0-7 lines to ROW0-7 lines as described in more detail below.

The core concept is that you have a set of sixteen lines, COL0-7 on CIA pins PA0-7 and ROW0-7 on CIA pins PB0-7, each of which will have a high or low level you can read.

The lines default to high when nothing connects them to ground; this is done by pull-ups in the CIA. But if any of these lines are connected to ground, via a keyboard or joystick switch or a setting both DDR=1 and PR=0 in the CIA itself, the line will be at low level, always overriding both the default pull-up to high and any CIA setting of DDR=1,PR=1 for that pin.

There may be multiple connections to ground, making this a "wired-OR" system: any one of these connections, if made to ground, will force the line low regardless of how any other connection is set. In other words, it's not possible for the line to be high if anything on that line wants to bring it low.

There are three basic ways a line can be brought low:

The keyboard is slightly more complex. With the exception of the RESTORE key (which is handled completely separately by means other than the CIA), each key connects one COL line and one ROW line together when pressed, as in a matrix switch. Here's the matrix diagram from my link above: 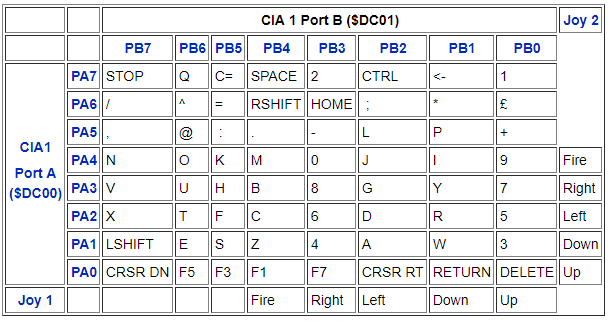 Thus, pressing a key will do do nothing at all unless something (hopefully you, by programming the CIA) has brought at least one COLn or ROWn line low, in which case a read will show corresponding ROWn or COLn lines as low for any pressed keys connecting the two. This includes the situation described in your link Scanning the Keyboard the correct and non-KERNAL way where the path goes through multiple keys, e.g., grounding COL2 and pressing A and S to give a path COL2→A→ROW1→S→COL5 that brings COL5 low.)

When scanning the keyboard, there's no particular reason as far as I know to choose to force COLn lines low and read the ROWn lines or vice versa. In fact, doing it both ways might even help you to do more reliable reads. (I provide a example of this below.)

Since you've got custom code to read the keyboard anyway, you should combine it with the code to read the joystick. This will allow you to reliably read both to the degree the hardware design allows, let you use your understanding of the above to design your controls to avoid conflicts, and also probably run a bit faster.

Since presumably no code other than your own will be touching the CIA registers, you can set up DDRA and DDRB once when your game starts and never touch them again. I'd just set them both to $FF when you initialize your game so that you never need write them again. As explained above, so long as PRA and PRB are are also set all to $FF, this will have the same effect as if DDRA and DDRB are both $00; the CIA will not force any lines low.

When you scan, first write $FF to PRA and PRB and then read them. This will tell you both which joystick switches are closed for each joystick and tell you which keyboard columns and/or rows you will not be able to scan.

What you do next depends on whether you're allowing 1 or 2 joysticks, what keyboard keys you're using, and how sophisticated you want to get. The easiest situation is if you ignore the keyboard when either player is pressing the joystick (i.e., player or players have to let go the joystick(s) to enter a keyboard command), which means at this point you're done.

But let's say you want to use both at the same time because you have a two-player game. In this case you could put player one using a joystick on control port 2 and have player two use the keyboard. Joystick 1 is connected to COL0-4, so if you limit player 2 to keys on COL5-7 there can never be interference between the two. You could for example use RUN/STOP/C= for up/down, :/= for left/right, and spacebar for fire. In this case your keyboard scan would write PRA to bring low in turn:

Another variation would be to use the keyboard to provide extra controls in a two-player, two-joystick game. If you use left and right SHIFT as a second action (hyperspace?) for each player, you'd first scan the joysticks by writing $FF to PRA and PRB as above and reading PRA (joystick 2) and PRB (joystick 1), as above. Then you bring low in turn:

Actually, you don't even need to do the write to bring low COL1 if joystick 2 is currently pushed down, or ROW4 if joystick 1's fire button is currently pressed, but the logic for those special cases is probably longer and slower than just doing the write. There might be some situation in which this idea could be used, though, such as SPACE modifying the action of the fire button on joystick 1.

There are endless variations of this; you just need to use the matrix information to figure out what's possible and which switches/keys interfere with each other.

Having read the C64 wiki on the CIA chip, I would say that your code probably isn't doing enough.

An easy solution to my original problem of using this keyboard code while simultaneously reading joystick port 2 from $dc00 is as follows:

The idea (as explained in JeremyP's answer) is to put the CIA#1 port A into read-only mode.

Not the answer you're looking for? Browse other questions tagged commodore-64 programming 6502 or ask your own question.

44
Why are C64 games inconsistent with which joystick port they use?
10
What 8-bit microcomputer systems multiplexed multiple physical ports on a single controller?
10
Did any devices use the Commodore 64 joystick ports as outputs or two-way communications ports?
11
Commodore 64 with partly working keyboard (part 2)

2
Using C64 floating point kernal routines with 16 bit integer
44
Why are C64 games inconsistent with which joystick port they use?
20
How did early computers handle mice?