I'm looking for another PET game, which I cannot find on various sites. It was one of the earlier ones - it was available when I first got access to the PETs circa 1981/82.

The user starts in the center of the screen and is surrounded by a series of concentric rectangular walls, two or three sets I think. There are gaps in the walls in the four cardinal directions.

Enemies appear outside the walls and begin moving inward. They will bump into the walls and remove a small part of them, but generally attempt to move towards the gaps and then approach you. Over several waves, the slight damage would add up and eventually new holes would appear that they could move through.

I recall that the characters used for the player and enemy were card suits? I think the player was the diamond?

I don't recall how the action between the player an the enemy happened, although I do recall there was some timing involved as you peeked out from behind the walls to make quick attacks.

Found it! Thanks to the excellent PET game database, it turns out I was looking for Attack! 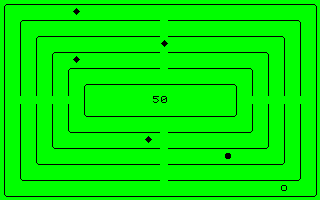 This was a race car game where you go around and try to pick up diamonds.

Not the answer you're looking for? Browse other questions tagged identify-this-game commodore-pet or ask your own question.

3
Early game, "Chase" or "Escape!" and many others