What's the most efficient method (other than brute force) to try all the possible permutations of:

What I'm really hoping is one of the following:

Note: Yes I tried looking for this information in the manual/online. It's not documented for some reason. And even if I find the actual answer, I'm still curious if this is a problem that can be fixed without a manual with enough perserverence. This device was manufactured between 1990 to 2000 if that helps. (maybe some options were not common at that time and I can eliminate them from my permutations)

Edit: I left out the device name on purpose to see if I could get the most general response. I'm not really THAT interested in figuring out this device, I am interested in steps to reverse engineer this in general. (So far I like the answers I'm getting - thank you!) Nevertheless this is a Liebert RAC2-8-EK auto changeover control panel. Once I figure it out I will add the settings so that others don't have to fight with it. The reason I can't change the baud rate switches is because even though they are listed in the manual, I just can't see them. I see all the other switches, but not those ones. I am guessing they are "deeper in" and I don't want to take it apart just to see. Or maybe I'm just blind ... I spent one hour staring at the manual and at the board and I just can't see them. I'm sure this is a text protocol (not binary). About the echo question, it's weird because only reboot can show those white squares. Once it's booted it's hit and miss. Sometimes there is nothing echoed. (Right now it's connected to live equipment so I can't keep rebooting it, but I will take it out of operation next week so I hope to be able to reboot it many times then). I do not have a logic analyzer or oscilloscope. All I have is USB->Serial adapter

Although standards such as RS-232, RS-422, and RS-485 existed, you can't rely on any device to follow them. Standards were often incomplete, devices often evolved faster than the standards, and many developers simply ignored standards. Thus, there are a small number of devices for which these instructions won't work. (In fact, one of the many advantages of USB is the thoroughness of the standard leaves little room for variations, simplifying support for devices.)

Another consideration is the protocol being used. Serial can be used as a way for humans to interact with a device (e.g. a remote login). It can also be used for one device to send results to or control another device. Using a text-based protocol makes it easier for debugging; a developer can simply "talk" to the device through a terminal rather than writing a special program to do that. However, other devices use a binary protocol, as it is easier to program and more efficient of bandwidth. Furthermore, some devices (such as point-of-sale terminals) have protocols that are intentionally kept secret.

Without documentation, binary protocols are difficult to work with, and are beyond the scope of this answer.

The Liebert RAC2-8 is a unit to monitor and control heating and air conditioning in a building. Sounds like a cool project! (Sorry for the shameful pun.) 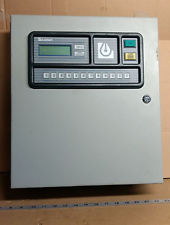 It appears that 1200 baud is the factory setting. Start there, and work your way up if things fail.

There is no mention of other serial settings, but the modem port requires Hayes-compatibility, and it sounds like it sends a status message when a terminal connected. The latter is probably the cause of the white squares you are seeing, and is possibly triggered by sensing the flow-control signals. My best guess is therefore 8 bits, no parity, one stop, and flow control on.

A terminal connected to an active RAC2-8 displays alarm and status messages when they occur. The prompt then asks the operator to press <space>, <S>, or <A>.

<space> displays Main Menu after a password is entered.

If you don't know the password, it can be changed from the menu system on the physical front panel. Good luck!

First: Concentrate on one thing and one data direction at a time to be able to work systematically - Don't change more than one setting between tries.

RS-232 interface lines work in pairs, TX/RX, RTS/CTS, DTR/DSR (and maybe DCD) are the pairs that need to be interconnected. DTR/DSR/DCD exchange somewhat "static" information ("this device is switched on and ready to receive/send"), while the RTS/CTS pair typically signals dynamic capability ("ready to receive/send the next character").

The way I do it (and I've had to do it quite a few times) is to hook it up to a storage oscilloscope.

Then just hook onto pin 7 (ground) and 2 or 3 (TX or RX, one at a time) and type on the keyboard, or otherwise get the device to generate ASCII.

If you know how to use an oscilloscope, you can easily see the pulses, measure their timing (to figure out the bit rate) and count the number of bits and parity.

Not the answer you're looking for? Browse other questions tagged terminal serial or ask your own question.

5
Could we change the baud rate for the two serial ports on a terminal and on a computer?
6
What system pioneered displaying masking characters for password entry and why?
3
Basic test for a RS232 serial terminal
13
Connecting Panasonic "Penwriter" RK-P400C to modern PC using USB to serial cable
6
Can escape sequences be entered directly from keyboard to terminal for VT100 and similar?
10
What happens when a terminal (like a VT100) is connected to a computer?
14
Using only one terminal, can I interrupt a process that's hung on very early Unix versions?
2
What 1970's terminal was black on white and had an orange keyboard?
3
Did communication between a PLATO terminal and mainframe use pushes?