How does Space Invaders on the Atari 2600 display all the aliens? 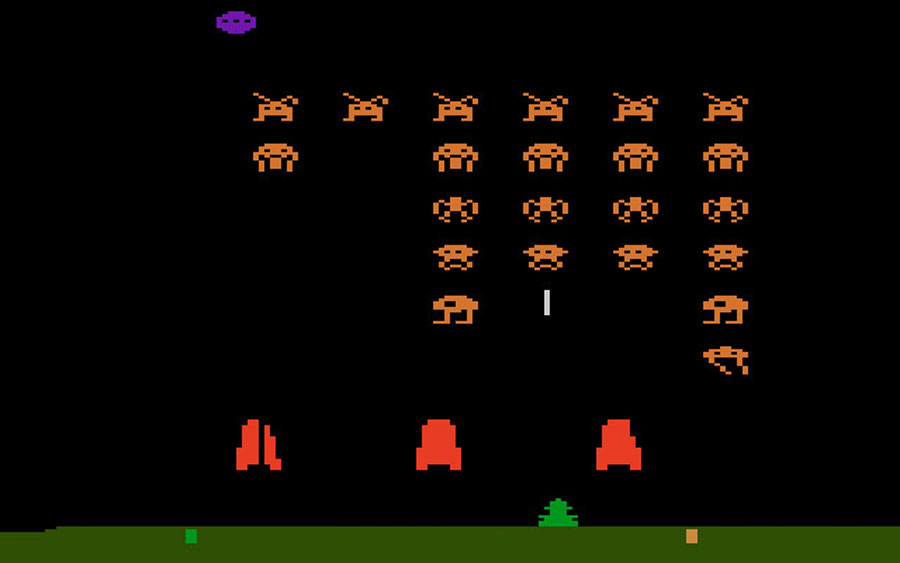 This answer elaborates a bit on the answers by @Raffzahn and @thrust26. The answer by @thrust26 is correct. The alien sprites are not positioned by repeated RESP0 or RESP1 triggers as the code below shows. The book "Racing the beam" mentions the following in a section about sprites:

Rick Maurer, the programmer for the VCS port of Space Invaders, discovered that strobing HMOVE while a line was being drawn would reposition objects immediately.

This suggests that this technique was used in Space Invaders. However, the only HMOVE triggers that appear in the code occur directly after a WSYNC, so definitely not multiple times per scan line.

The aliens are drawn using the two player sprites. Both NUSIZ0 and NUSIZ1 are set to $06 which means single pixel resolution and three copies each at a medium spacing. The copies of both sprites interlace to form a row of six in a pattern "A B A B A B". The appearance of each "copy" is changed by loading different sprite patterns in the GRP0 and GRP1 registers by carefully timed code:

The Y register counts down from 9 to 0 (inclusive) to draw ten scan lines for each alien in a row. An alien pattern can easily be modified by adjusting the low byte of any of the pointers in $ee to $f8. Interestingly, these scan lines are drawn without any intermediate WSYNC trigger, purely based on careful instruction timing.

Late to the party, but I think wrong information should be corrected.

The Space Invader sprites are simply displayed using 3 copies of each of the two sprites. The RESPx trick was first shown in Galaxian three years later.