Can a Commodore 64 use two screenmodes on one scanline?

Many games, for example, Maniac Mansion, or Kissenschlacht, use two screenmodes. Oftentimes, a bitmap mode for the main screen, and a text mode for the lower part which displays scores or whatever. Considering how the raster moves across the screen, it's not so hard to implement. It's basically, set up a raster interrupt, and then change the mode in the interrupt routine. Same way you open up the lower and upper borders.

Now, with careful timing, the left and right borders may be opened up too. So I'm wondering if a similar technique can be used to change the screen mode partway across a line, so that the whole screen is divided into, say, a textmode left half and a bitmapped right half. Has this ever been done or could it be done?

[TL;DR] vertical rastersplit with different graphic modes is possible with some quirks, in practice one would rather write characters onto a full hires image.

I did some experiments, and found out that it is possible for the VIC chip to switch mode within a rasterline. However a practical application is hindered by the following issues: 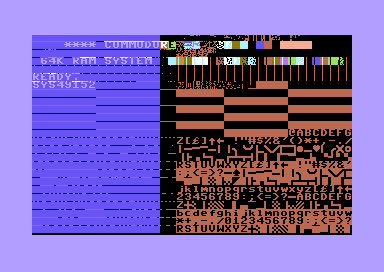 That being said, when one can live with every 8th line on the left side being hires (could be colored in background color so it would be not visible) and when the two character wide transition border is concealed, a vertical split would be feasible.

See my question How to exactly sync to the raster line for a vertical raster split? for a short code example.

On a second thought, if the overall mode is hires it is possible to represent any text or blockgraphic from textmode, only printing a char requires 8 bytes to be poked instead of one. However, this is still much less effort than the raster split every line.

I'm going to go out on a limb; after thorough reading of The MOS 6567/6569 video controller (VIC-II) and its application in the Commodore 64:

No mention is made anywhere in the documentation of anything that would cause mode changes to take effect anything other than instantly, and the idea of raster effects that cause vertical boundaries is well-enough established that you can find the occasional argument about it.

Several vertical raster split demos are available on Youtube but alas I was unable to identify one that I could definitively say was a mode change rather than a palette effect.

21
What's a good way to implement this “splashing water” effect on the C64?
20
How to check the C64 graphics mode used by Maniac Mansion
6
How to exactly sync to the raster line for a vertical raster split?

21
How can I overclock my Commodore 64?
20
How to check the C64 graphics mode used by Maniac Mansion
3
How can a C64 interrupt let the KERNAL keep operating?
7
Can the Commodore 64 display 26 rows of text?
5
How can I use the Commodore KERNAL to print a character to the screen?
10
Did any devices use the Commodore 64 joystick ports as outputs or two-way communications ports?
16
Can I use all features of a Commodore 1571 external drive from a C64?
9
What are principles of vector CRT display? Simplest way to drive CRTs?