Use of E,S,D and X for cursor movement

The standard cursor movement keys on the TI-99/4, /4A and apparently /8 were Function + E (for up), S (for left), D (for right), and X (for down). These keys were also often used (without needing the function key) for games.

WordStar on CP/M used the same keys, albeit using Control rather than Function (as Function was a somewhat specific key to the TI keyboard). A number of other CP/M and early DOS applications copied the WordStar combinations, so they were quite common for a while.

I wouldn't make a bet, but Wordstar is what I would have said as well - or more correct, keyboard layout, as the selection is not an invention out of nowhere, but follows a logic based on common (terminal) keyboard layout.

ESDX (and ESDF for games and DEC alike T-Bar cursors) is the first cursor like location that can be used across various keyboards. These letters are the same on English and German Keyboards (QWERTZ/QWERTY key order) and at least close to each other and as well on the left side for French Keyboards (AZERTY). On terminals, where there is no scan code, but letters and letter wise assigned control codes this avoids the need for country/keyboard dependant command routines - and, equal important, different manuals and key sheets. These three keyboard layouts cover a great deal in Europe and worldwide.

For wordstar the original diamond was chosen probably because the ctrl key position on a lot of older keyboards made it a natural extension and it can be used by the left hand solo. It also avoid the Ctrl-H and Ctrl-M which would be used for backspace and carriage return. While it's possible that the TI engineers were influenced by Wordstar the dates make that seem a little bit unlikely. (Wordstar is 1978 and the TI is 1979) 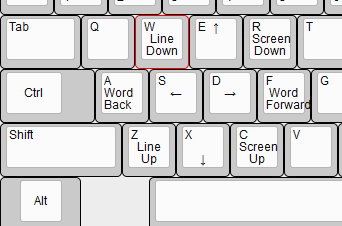 36
What was the purpose and history of the C64's special keys?
60
Why did F1 become the Help Key?
8
Who established the original F1 desktop BIOS key and why did laptops use a different key?
13
On what Apple II and II+ keyboards can the ']' character be generated?
3
When and Which (PC) Keyboards Introduced Browser and/or Multimedia Keys to Windows
16
Why are older Shift keys shaped the way they are?
9
Origin of Ctrl-Alt-Delete key combination to reset
5
What is the general term for keyboard overlays that show special commands or hotkeys?