I'm trying to identify a game I remember from the 1980s. The game was shown from a bird's-eye viewpoint (or maybe isometric?), on Apple IIe, IIRC.

You controlled a guy with an axe, who was constantly walking forward, but you could rotate him left or right. So was the other player. You had an axe in one hand, and each time you swung the axe through the other player, you damaged him - this was shown as darker area (and would eventually kill him, winning the match). If you got to one side of the screen it, would scroll (as only part of the playing area was shown at any time on the screen).

There were also (one or more?) flying discs, and if you stepped on one, you would fly forward at much higher speed (which could work for you, or against you, depending how good you were).

I think you could choose whether you wanted to play against another player or against the computer.

(Some of the details of my memory might be smudged by time, of course.)

Does anybody remember the name of this game?

The Bilestoad. Axes, flying discs, and blood - kind of narrows it down. ; - )

But here's a screenshot with axes, a flying disc, and blood. 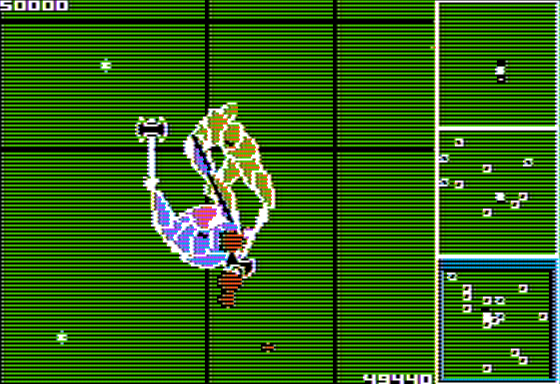 Here's a clean crack (playable in-browser), a video of the game and an interview with the author. This was a controversial game at the time, and possibly influential. John Romero is apparently a fan.

Interesting side note on the Bilestoad... the source code was recently discovered and posted to the web. Ebay Seller has no idea what the discs were and but dug them out of a dumpster where the estate heirs had tossed them. Also in the discs were source files for some other Data Most games like Aztec and Swashbuckler. Twitter link here here.https://twitter.com/Apple2Games/status/1043340704544645123?s=19

Not the answer you're looking for? Browse other questions tagged apple-ii identify-this-game or ask your own question.

4
What's the name of this game on the Amstrad that had red-blue separated 3D?
9
Identify this Amiga game: It's just like Rocket League
11
What is this old PC truck game?
6
Searching for Swedish Mac game from the early 1990's where you try to sneak out of the house
2
Old grid-based puzzle game with snakes that wake up when on the same row/column as you
9
90s game about a man with a revolver fighting demons
1
Identify World War 2 European theater PC wargame circa 1995
6
1980s Commodore 64 game about flying toward tower
5
PC 90s 2D Platformer Puzzler Indie Exit Levels With Robot