What is that Slot on the Bottom of an Exidy Sorcerer

Ok, here's a tricky one. Being bored I picked out a Sorcerer and opened it to gloat over the chips. Doing so I noticed a strange slot: about 64mm long and 3mm wide, next to the type plate, basically below the power supply.

It looks almost designed for a 50 wire flat ribbon cable. Except there is nothing on the inside that could support such an interface. I also can't remember any Sorcerer peripheral working that way (*1), a the flat ribbon used for the expansion box is located at the other end. 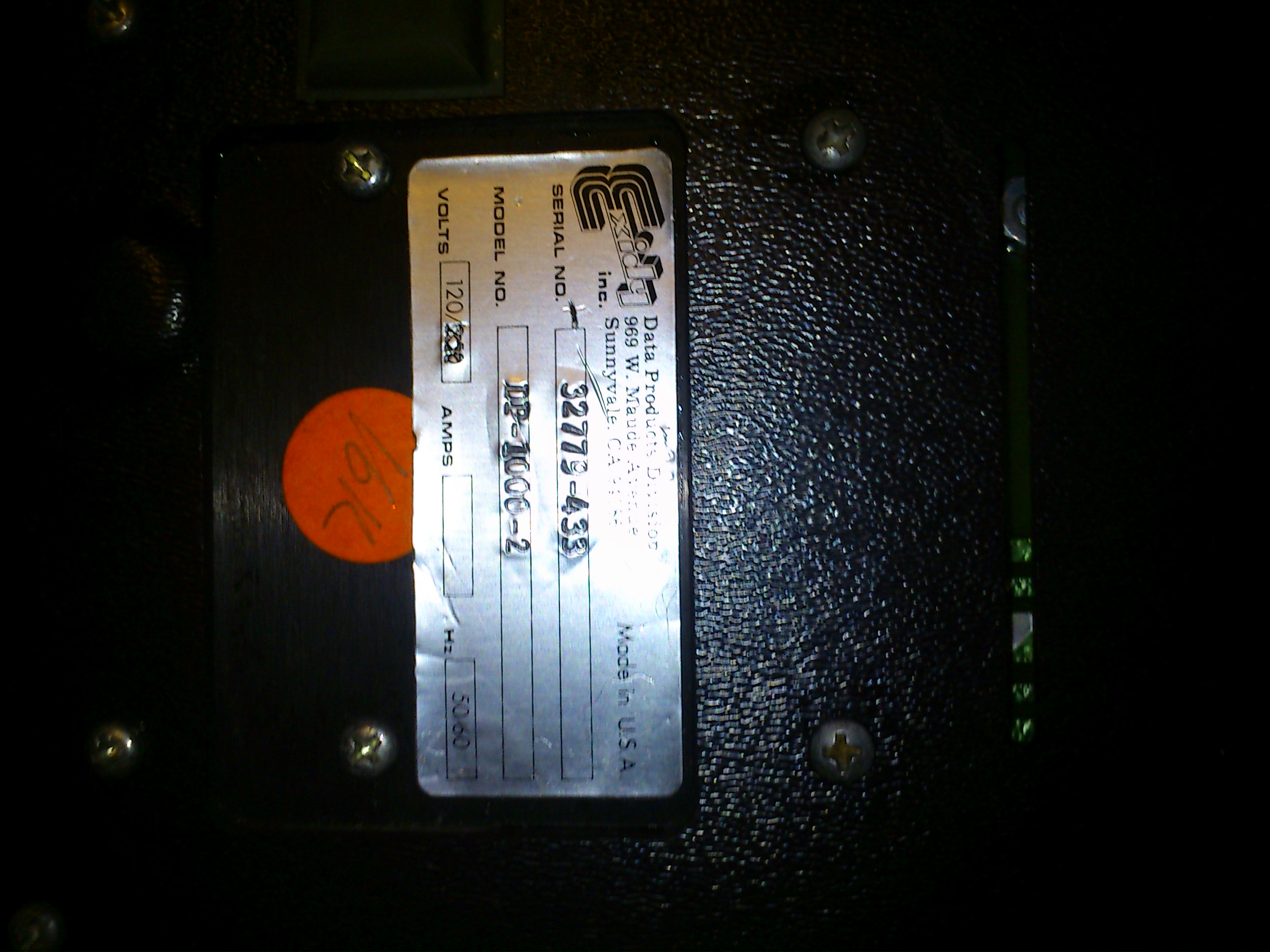 Here for the bigger picture: 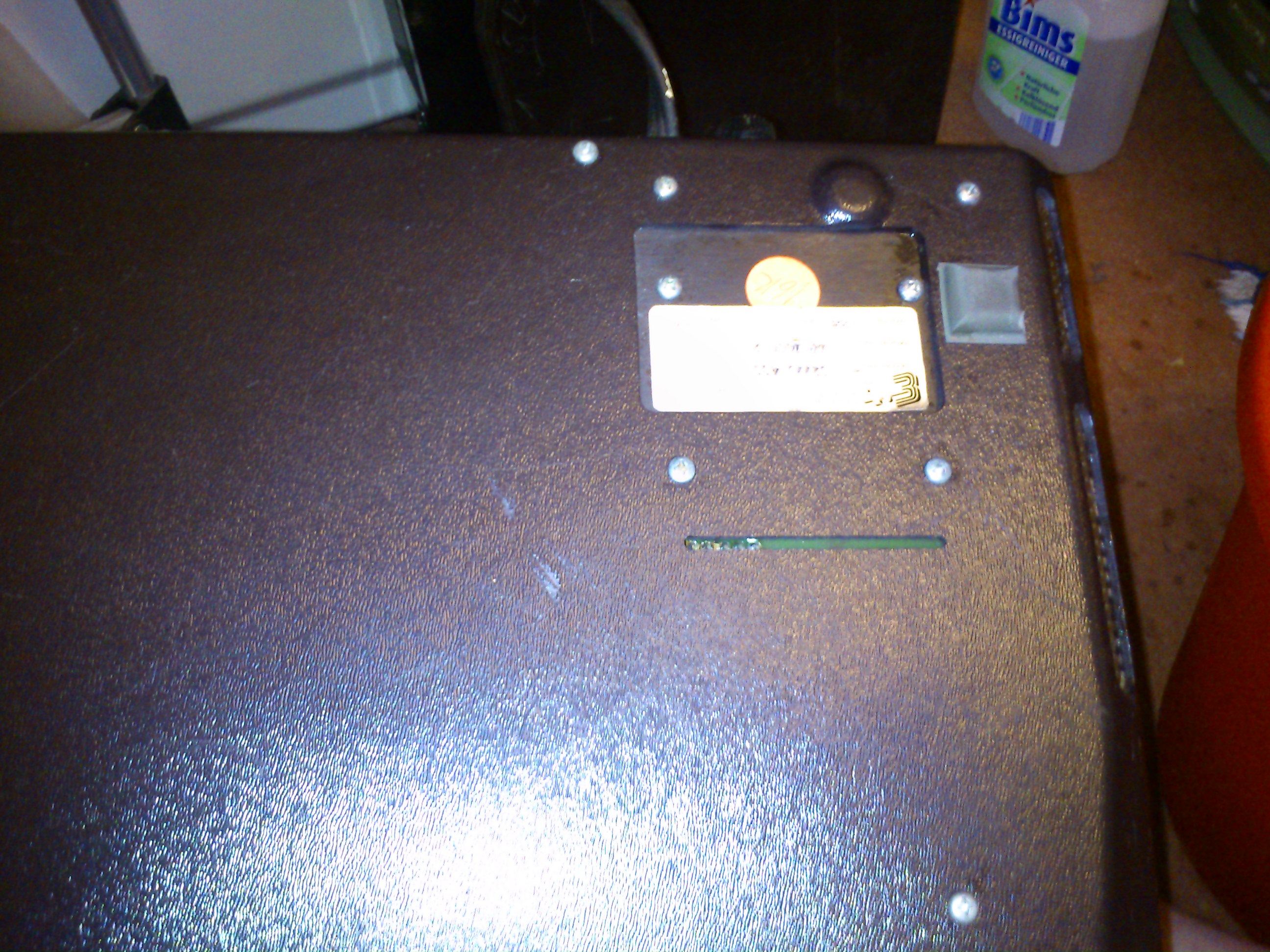 *1 - Ignoring for a moment that such a cable could only be factory installed, as no connector could be slipped through

Howell Ivy was always on the look out for a better power supply, he'd talk to switching power supply vendors now and again (and Apple managed to use one a bit later).

Note the 5 ohm 10W wire wound resister across VR1 the +5V series regulator (an LM323 in a TO3 package). The transformer primary to secondary winding ratios were picked to allow 50Hz operation as well at 60Hz. The result was a lot of waste heat when powered by 120VAC. The resister reduced the power dissipated by the LM323 series voltage regulator, it could could go into thermal shut down otherwise. A switching power supply would cure all ills. The decision was driven by cost.

The slot in the bottom provides improved airflow for a bit more cooling around the power supply. The width of the slot, location and size of the exhaust grill holes picked to comply with Underwriters Laboratories requirements at the time, I recall seeing the report. We used to joke about the indentation above the power supply being intended for use as a coffee warmer.

Before my time someone at Exidy would have amused themselves with thermocouple wires, a router to cut slots and masking tape for determining where the location and size of a cooling slot should be (I recall seeing the case bottom test article). There'd have been a strong desire to minimize the number of rework steps with a long lead time on engineering changes to the case. A single channel would be preferable.

I was the product engineer for the Sorcerer for a while after adding the second row of DRAM before moving on to bigger things. (Cutting the two-layer DRAM footprint off a blank logic board and wiring it up to demonstrate signal integrity using T nets and the ability to stay in a two layer PCB.)

There's back panel access to the edge fingered logic board CPU bus for the S-100 expansion chassis (a real hit with the Micropolis dual floppies), the bottom slot was never intended for an expansion cable. There was also an aborted combined Monitor/floppy housing on a pivot-swivel which proved too expensive both in development and unit cost.

This is the logic board revision following adding the second row of DRAM: 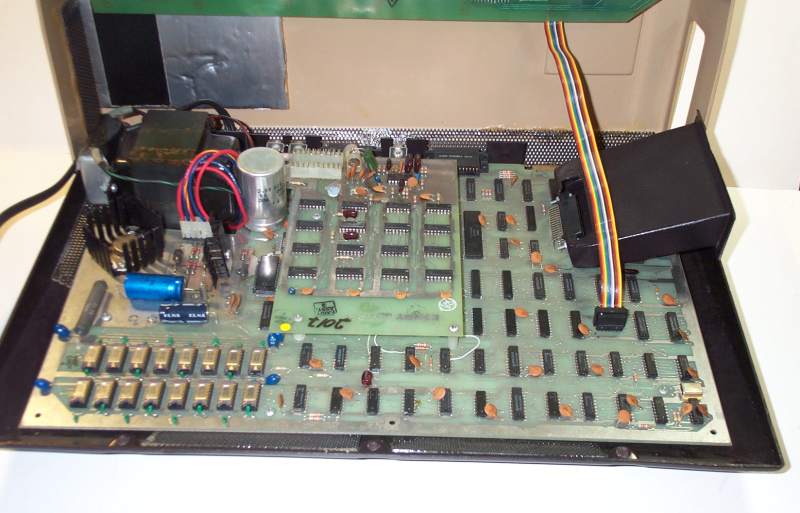 The slot in the bottom of the case would have been just to the front of the power connector and under the logic board. Here the big resistor is mounted through hole instead of hand-soldered. (I couldn't find an original logic board photo.) You can see the Corcom EMI filter added to the transformer assembly for 47 CFR Part 15 B compliance (FCC unintentional interference).

The Z80 CPU is in a 40 pin socket on the right hidden under the Expansion ROM pocket.

I confess to never having seen a SorcererII personally. I was off elsewhere by then. You can find case bottom images for it showing no slot and it used a mezzanine power board lending itself to potential replacement with a switching power supply. It also had RichF's three rows of DRAM with Bruce's cassette interface on the logic board: 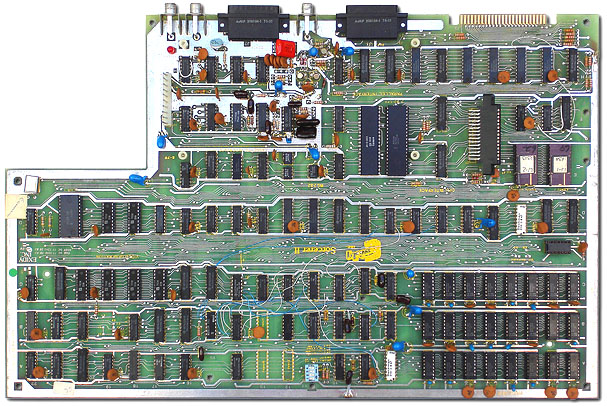 Not the answer you're looking for? Browse other questions tagged exidy-sorcerer or ask your own question.