My ZX Spectrum 48k seems very resistant to working with audio input. I no longer have any cassette players, so am relying on audio files from digital players. I have been able to save and verify a tiny BASIC program to a digital recorder, but getting the right volume to save files from playtzx or OTLA is eluding me.

What else should I try?

If (and only if) your audio player is battery powered, and your Spectrum is the 48K or 128K toastrack model, try the following procedure, intended to boost the volume of your wave signal, as seen by the Spectrum EAR circuitry: 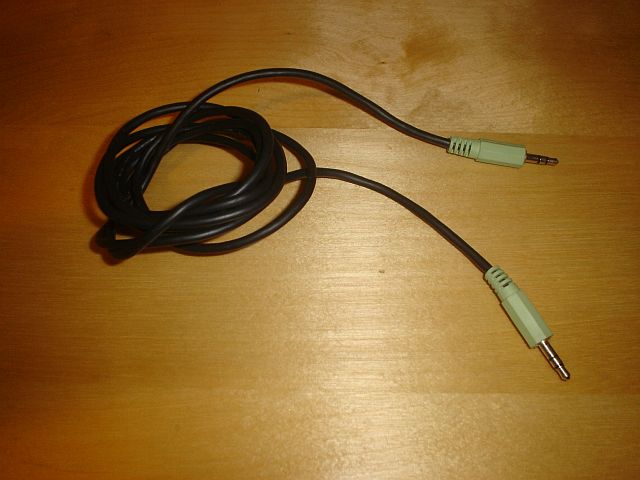 Why do we need it to be stereo? The trick is that both channels from the 3.5'' stereo plug will make contact inside the Spectrum jack this way: 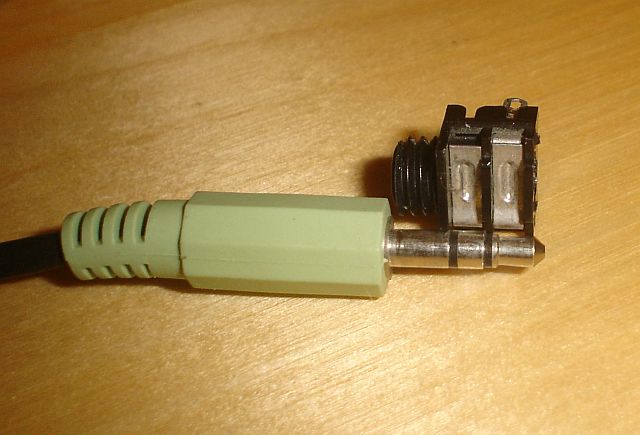 So when you use it to load from a digital audio player, that will normally output the same level in both channels, you won't hear (or load) anything.

Then what? Just invert one of the channels so the voltage level of one channel, reffered to the other channel, will appear to be double the value of any of both channel reffered to ground (which won't be connected at all in our setup)

If the TAP/TZX conversion program allows this inversion, use it. If not, you can use an editor program like Audacity to perform the inversion. Here is how:

First, load your generated WAV into Audacity. The generated WAV should be stereo, but if not, it doesn't matter. We can clone one channel to the other one to make it stereo. 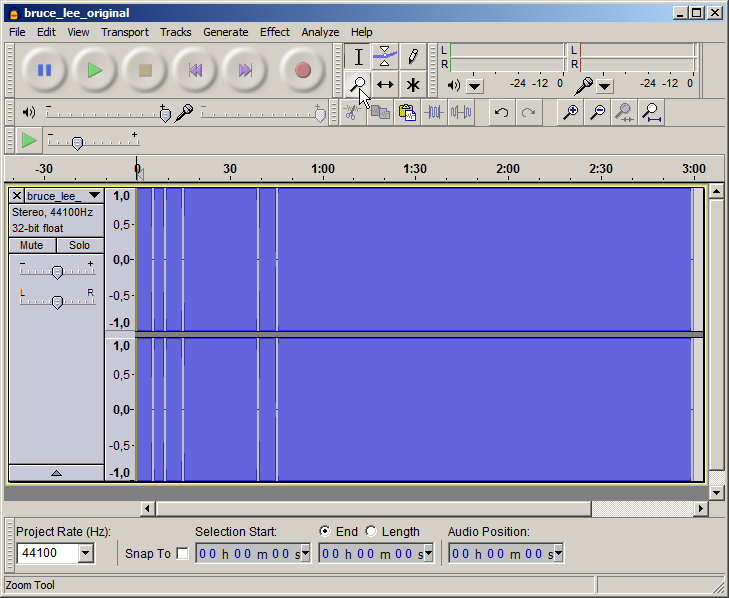 Use the magnifier tool inside the wave window to amgnify it to the point you can clearly see both waves, that initially will look the same. 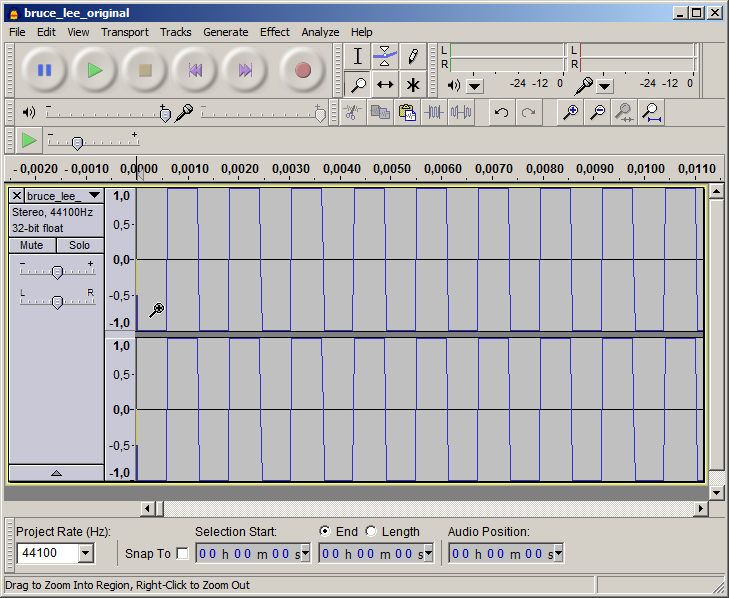 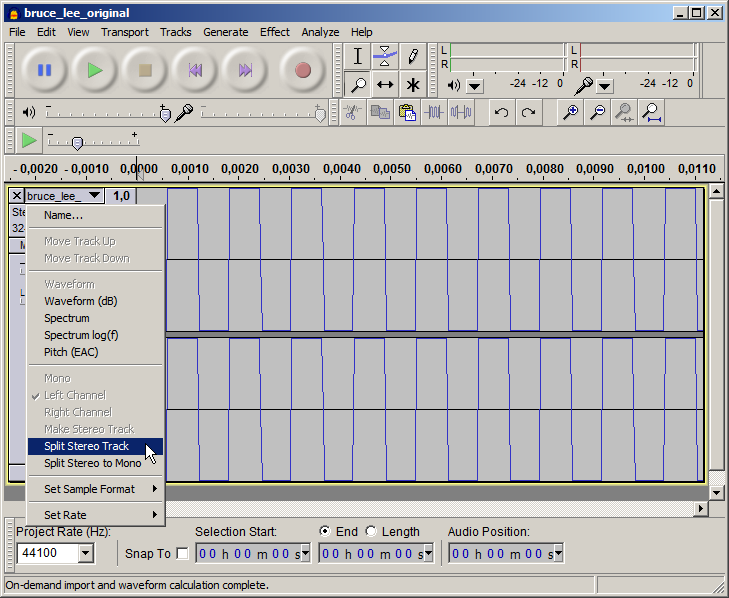 Now we have the left and right channels in different tracks, so we can manipulate each one independently.

Change to the select tool (above the magnifier tool) and click the second track (the one below the other) as near as possible to the beginning of it. Press Home to bring the selection mark to the very beginning of the track. From the menu, select Edit -> Select -> Cursor to Track End so the whole track is selected. 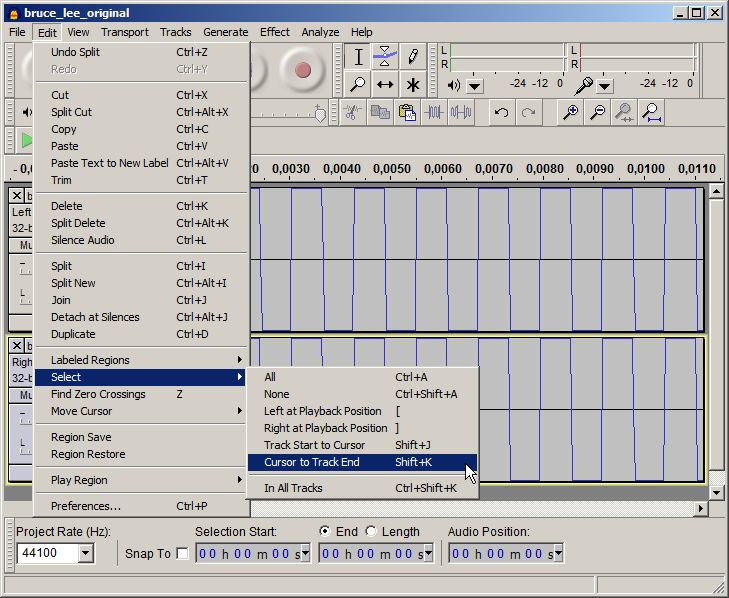 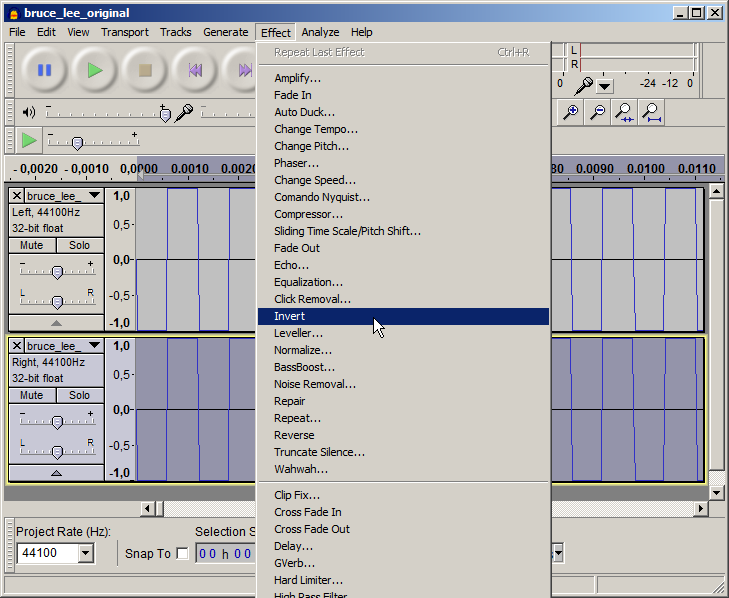 Now we have two independent tracks, one of them with an inverted version of the sound of the other one. 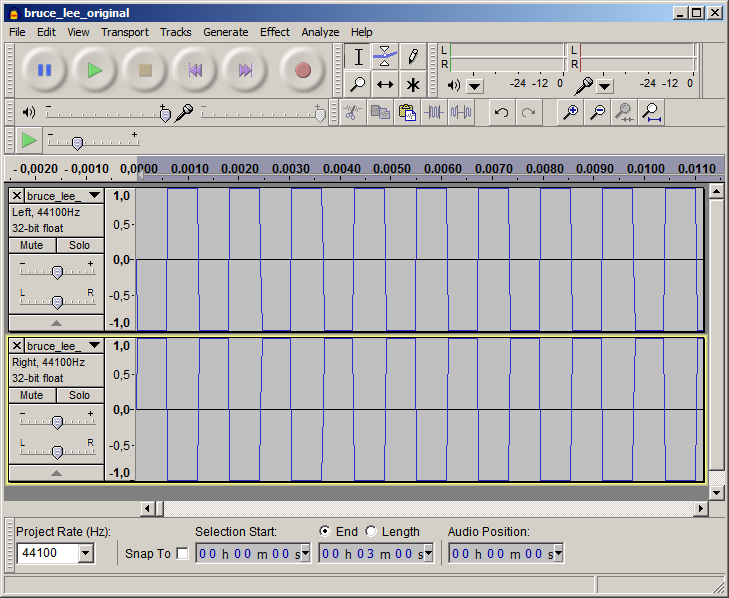 Now select both tracks: press Shift and click on both tracks (the region where the properties of each track are displayed). Then, click on the name of any of them and select "Make stereo track" 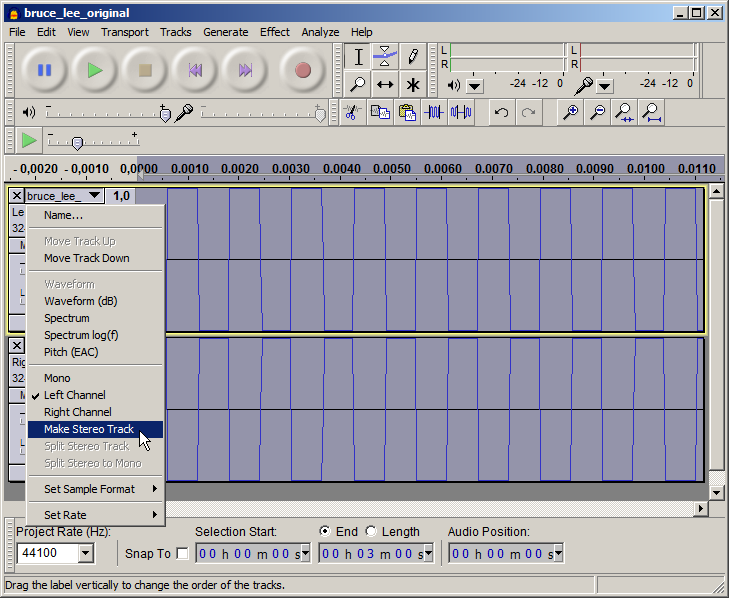 The final result should be a stereo track with one channel inverted. 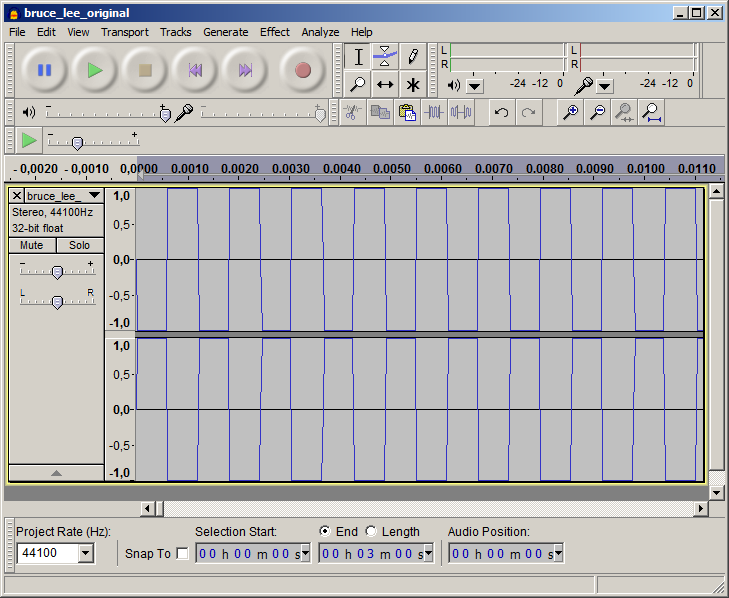 Save this wave as PCM stereo track by choosing File -> Export 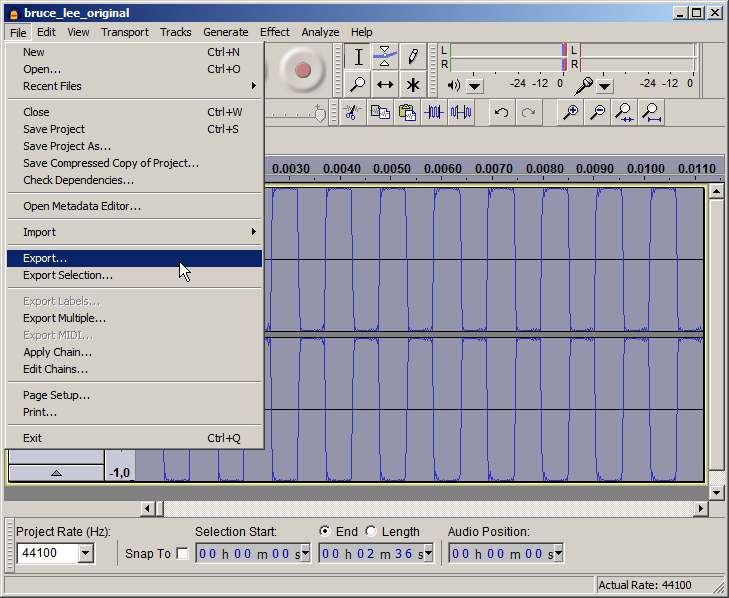 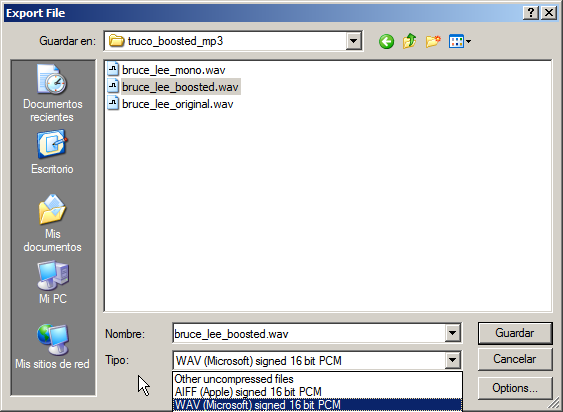 Copy it to your digital audio player and use the stereo cable as described to play the resulting sound. Don't be surprised if you need to lower the volume in order to get it loaded.

For example, in order to load this Bruce Lee example with a Samsung Onyx, I had to do it using the MIC input on the Spectrum, as the EAR input was too loud to be usable. 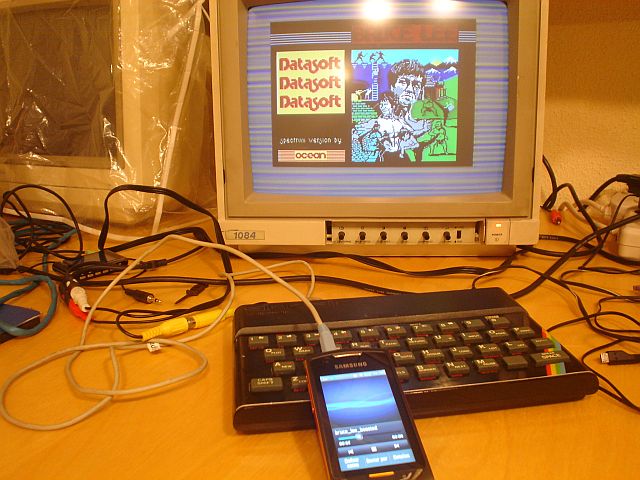 I've confirmed that mcleod_ideafix's method is reliable for regular tape images. Here is a shell script to do (effectively) the same thing:

Ultimately I'd like to encode these as MP3s, tag them properly, and add loading screens as cover art. But that can come later.

What this script does — for people who might want to port it to systems without the Bash shell. Assume the script has been called with an argument game.wav, a mono audio file of the game loader:

The -q sox option I used throughout is just to make sox quiet: it tends to create lots of text output that you don't really need.

You could try to start using ZX Tape Player application:

I also had problems getting my PC to work with OTLA on my 48+ model. What I did was play the .wav file through Video Lan Player (VLC) on full blast (125%) and it worked!

I used a stereo to split channel lead using phono to jack adaptors (basically green line in to red/white phono audio connections). I'm sure there's an easier way but this is the way that worked for me.

You don't have to do all this to load games into ZX Spectrum! The main thing is that your audio player has low output signal, so it just can't do the job.

You must play audio files on PC, but only rear speaker output, because you can burn front headphone output! Also, any amplifier is OK.

Audio files must be in WAV format. Absolutely no tuning and recompressing needed.

Don't use mp3 format to save space, because it can never be perfect as WAV. 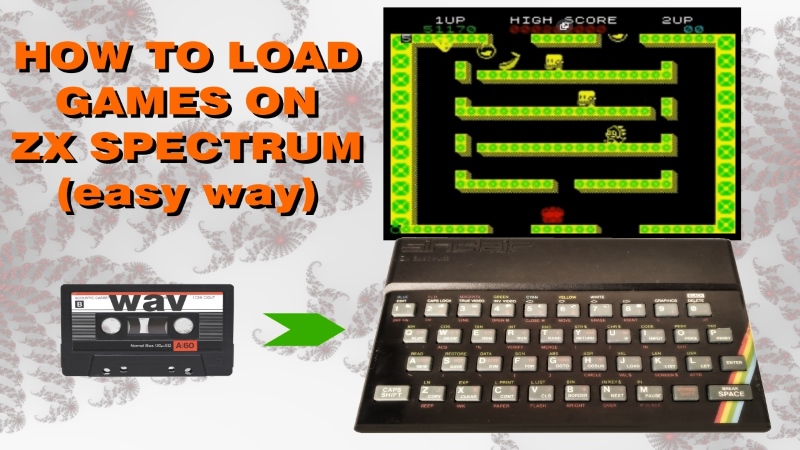 Not the answer you're looking for? Browse other questions tagged zx-spectrum cassette-tape audio or ask your own question.

21
How did "full memory" Spectrum tape copiers work?
12
Why did the ZX Spectrum use edges for its tape storage routines?
24
Blue and yellow stripes on the screen when loading from tape on ZX Spectrum
25
Why does waggling the joystick of a C64 cause errors loading from tape?
4
Use of PSK for storage of data on audio tape
15
Developing an application in the era of cassette tapes (audio-tapes)
15
Using a modern PC or other digital audio recording device as a cassette recorder replacement
12
Cassette tape storage formats
18
How much data could a home computer store on an audio cassette?
2
ZX Spectrum red stripes during loading