But maybe Bill Gates was consulted on the matter, perhaps? And if he was, by whom? 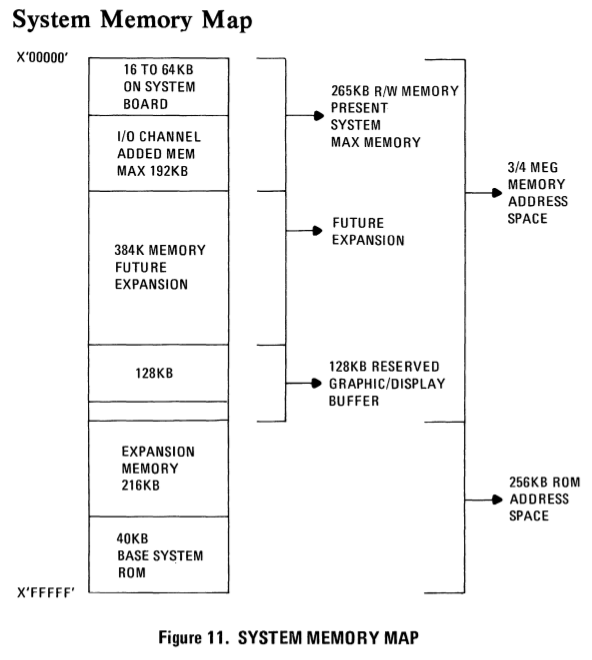 DOS itself isn’t limited to 640K. Any amount of RAM (within the 8086 memory model’s limitations, i.e. up to slightly over 1MiB) could be used. This was the case in some DOS-compatible computers: the Tandy 2000 and Apricot PC provided up to 768K, the DEC Rainbow 100 and Sirius Victor 9000 provided up to 896K, and the Siemens PC-D and PC-X provided up to 1020K; the original SCP systems on which 86-DOS was developed weren’t limited to 640K either, and Microsoft kept one for a long time because it was the only DOS system they had which could run their memory-intensive linker build. On PC-compatible systems with memory available at 640K, typically provided by a VGA adapter, drivers could be used to add the memory from 640K up to 736K to the memory pool, increasing the maximum runnable program size. (This worked fine for programs which only used colour text mode, or CGA graphics.) Additional memory available in separate areas above 640K could also be added as separate memory pools, but that didn’t help run larger programs.

50
What is the oldest computer capable of running a modern version of GNU/Linux?
54
Why didn't the 8086 use linear addressing?
24
How was the 80186 incompatible with the IBM PC?
16
Did the Intel 8086/8088 not guarantee the value of SS:SP immediately after RESET?
7
Is there really 1MiB of physical memory in the motherboard of a PC AT/XT?
4
Origin of "640K RAM is enough" quote

16
How did the IBM PC handle multiple physical devices serving memory at the same physical address?
54
Why didn't the 8086 use linear addressing?
26
The almost-was Atari IBM PC
45
Did IBM encourage Bill Gates to retain the rights over PC-DOS?
8
IBM would-be purchase of CP/M
6
Did the PC/AT-bus use its expanded address space?
4
IBM PC memory map - why RAM at the bottom?
8
How can I malloc() a block that's guaranteed to lie within a single DMA segment in Turbo C 2.01?
6
How did Apple IIe software handle 64K bank switching?
22
Was it possible to cause persistent changes to a mid-1980s IBM-PC using POKE in GWBASIC?