I'm trying to identify a game I remember from my first exposure to computers (the Apple II at secondary school back in the late '70s).

I remember two games I really enjoyed, the first a Star-Trek-like game which was a sneaky way of teaching us trigonometry (the 8-by-8 grids where the Klingons et al were had to be shot at by using degrees, so we had to convert in our head based on the non-hypotenuse sides of the triangle). I already have that one.

But the other game I enjoyed was some form of space trading game. It had companies like Betelguese Bargains, Capella Corp and Eridani Enterprises (I made those first two up, my memory from forty years ago is not pristine, but they all had some star name as the first word - I think the Eridani one was accurate).

These were represented on text screen as the equivalent letter (like B, C or E) and you expanded your company by selecting new (adjacent) co-ordinates in the galaxy to move in to.

If you encountered another company, it would result in some form of take-over operation, probably based on size with some minor random element.

The object, of course, was to be the last company standing by taking over all the others.

Does anyone have any memories of this game or any idea what it might be called? None of the games in the Apple II list seem to be a match. 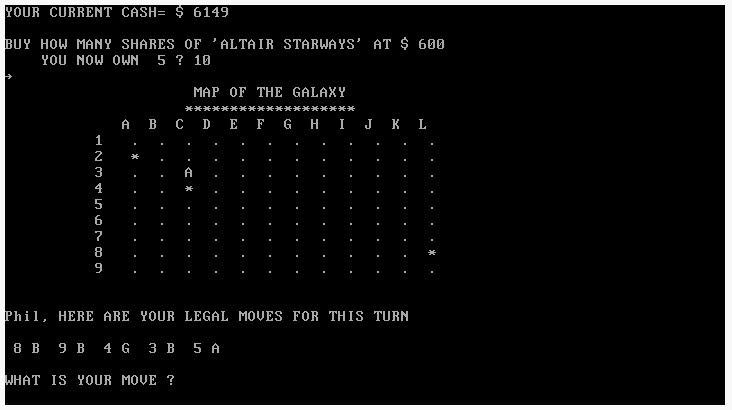 The first part of the listing shows details:

I found a copy here.

If you google for it, you'll find a number of more modern implementations, with a bit of history... one source claims it evolved out of Star Trader.

It was the board game "Acquire" set in space. I used to hook the Laser 128 up to the TV and play this with friends. At least until someone realized the game wouldn't prevent you from buying negative stock. If you weren't doing well and shorted at the right time, it'd make you a fortune. Otherwise it'd trap you with massive negative interest and no cash.

4
Identify logic game involving turning things into ladders
9
Identify this Amiga game: It's just like Rocket League
11
Help identify old Apple game from 80s (Apple II, Apple IIGS)
6
Identify this 1990s-era educational game featuring kohlrabi
10
What was that old FPS game where you shot rats in a sewer?
4
A game about defending a castle, with trading-card-like gameplay and aesthetic, in English and Czech
11
Please identify this game from movie Dawn of the dead aka "Zombie"