The video memory size on ZX Spectrum is 6912 bytes (this is bitmap + colour attributes together). The fastest way to copy on Z80 is about 12.5 T-states per byte. ZX Spectrum has 70K T-states per single video frame. Thus, one cannot copy more than 70000/12.5 ~ 5600 bytes per frame. Therefore, most smooth scrolls you'd see would be done by filling i.e. constantly re-drawing pre-generated content. Filling is possible at 5.5 T-states per byte; hence, it at least gives you a theoretical chance to fit into a frame.

I keep talking about frames because the only way to get truly smooth scrolling is by updating your screen every frame, at 50Hz framerate. The challenges involved in this are such that during the commercial life of the Spectrum, I am not aware of a single 50Hz scroller released. Zynaps was famous for 25Hz updates (which were sometimes slower than this). There were several other scrolling platformers at 25Hz, each considered a massive engineering feat. R-Type runs at 12.5 updates; I never measured the frame rates in isometric games, but I can guarantee that they will not run faster than 12.5-18.7 frames per second. It is simply impossible to do it faster due to the limited fill-rate of the platform.

Now, the reason why I gave you all these numbers is as follows: Amstrad CPC has the same CPU as ZX Spectrum and 16Kb video memory. Essentially, Amstrad CPC has a similar fillrate and twice as large screen. Thus, any code trying to work with video memory as originally designed for ZX Spectrum is going to be automatically delayed by a factor of 16Kb/6.75Kb > 2. Zynaps slowed down by a factor of two would only be as smooth as R-Type was on Spectrum; R-Type, not an icon of smoothness by itself, would become properly jerky if slowed down this much.

Of course, modern demo-scene for Amstrad CPC shows that some of the fillrate issues can be addressed by getting help from the video chip. I believe that, for example, people can generate repeated scanlines, so that only half or quarter of scanlines would need to be actually updated. This would tilt the fillrate balance into somewhat more tolerable situation. 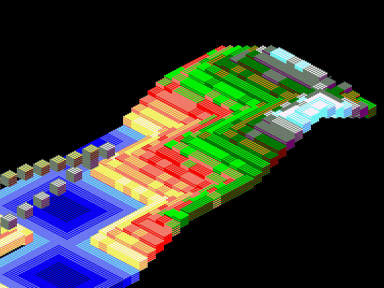 Thanks to the excellent answers to this question, I have now learned that

Though I had my doubts that contemporary games used hardware scrolling on the Amstrad, I found the following comment from Pete Wiseman, regarding Scramble clone 'Killer Cobra':

There were some well known hardware registers that you could use to offset the screen and scroll it one 4-pixel block at a time but that produced scrolling that was just miles too fast for this type of game... Anyway, the technique published in Amstrad Action revealed a second hardware register that nudged the screen horizontally to the right by 2 pixels. I think it was some kind of screen centering register that wasn't documented but if you used this in conjunction with the hyperspeed 4-pixel scroll, you could slow the scrolling down to something more playable. To do that you would scroll the screen left by 4 pixels but also nudge it right by 2, effectively scrolling left 2 pixels. Then the next frame you could just nudge the screen centering register back to it's normal position scrolling left 2 pixels again. Then repeat and you'd end up with a 2 pixel scroll which although is probably twice as fast as arcade games like Scramble and Super Cobra, it's playable ... and silky smooth as it uses hardly any CPU.