Is my Japanese Pokemon Red cart fake or damaged?

I recently got this copy of Pokemon Red (JP). After an indeterminate amount of time (anywhere from 30 seconds to 30 minutes), it will cause my GB Player to crash. I have functional copies of Yellow and Green that don't cause this, so I know it's the cartridge, not the system. The system appears to believe I'm ejecting the game mid-playthrough (it gives me the "please shut off the console before ejecting" message). There's no discernible in-game trigger for this. 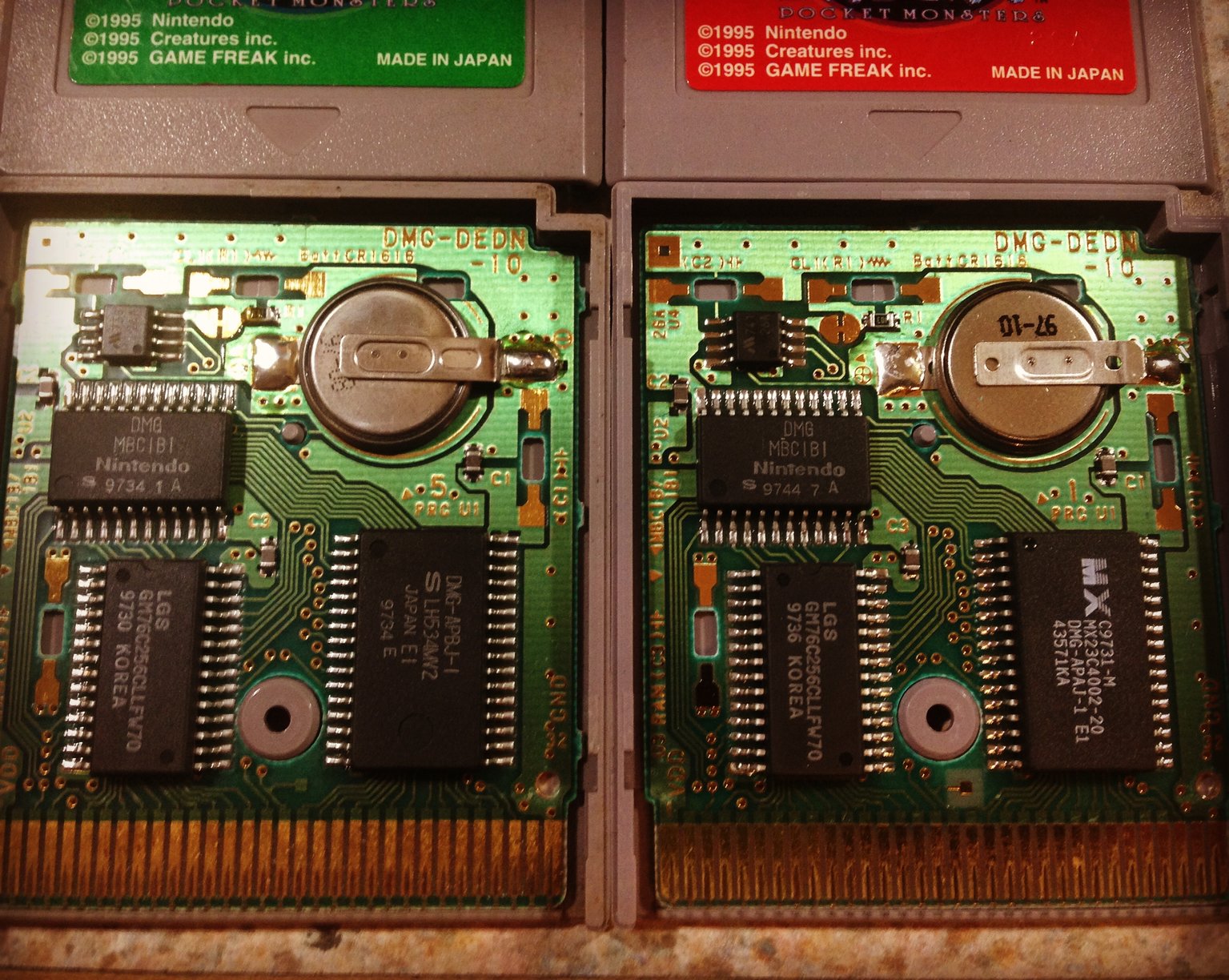 I looked inside the cartridge and noticed a few things:

Does this evidence (or anything else you notice) make it appear that this cartridge has been tampered with in such a way as to cause the aforementioned crashes? Would any of this justify returning a cartridge as defective or damaged?

I see no reason to believe that the Pokémon Red cartridge (nor the Green one) is fake.

Why they're not fake

The small portion of the outer cartridge and labels in your picture shows a high standard of printing on both labels, far better than that which I've seen on fake cartridges myself.

The fact that the battery may have been replaced isn't an indicator of a fake: most (all?) original cartridges' batteries will have been drained over the decades, and if a modern-day owner wants to save their progress, they will have to replace the battery. Although the fact that both batteries have 1997 date codes (97-xx) suggests that they are, in fact, original.

The PCBs of both cartridges look remarkably similar, including the shape and style of the lettering. The lettering of the two large chips on the left (the MBC1 Memory Bank Controller and the GM76C256 Static RAM) appear identical, with the exception of minor differences on the date codes. While the GM76C256 would be commercially available, the MBC1 is a custom Nintendo chip, and the best of replicas would typically use a slightly different font for the chip marking.

By comparison, look at the obvious differences in the counterfeit (Game Boy Advance) games shown on these two pages. The board layout of the fakes is markedly different, using chips of different size, and perhaps specification, to the genuine games.

Returning to your two cartridges, the right-hand chip, the ROM chip, looks quite different for the Green and Red versions. They are, however, labelled the correct title codes for the respective games: DMG-APBJ and DMG-APAJ (matching this list). The first of the two pages I linked to states that genuine cartridges typically have one chip labelled 'MX', which your suspect Red cartridge does. (It appears that MX was a supplier of RAM chips for Nintendo, and the same style of chip is used in these games.) Your Green cartridge's chip, on the other hand, matches the genuine one seen on this page.

Do bear in mind that these chips and the PCB were placed inside an opaque grey cartridge, and hardly any regular owner would ever open the cartridge up. Given that, if this were a fake, the effort made by the fakers to so accurately replicate the appearance of something that would never be seen appears exceptional.

What could be causing your cartridge to crash

The GM76C256 SRAM chip gives 32 kilobytes of storage. Not all of this space is used for save data, much of it is used for working RAM (WRAM) alongside the 8 kilobytes of RAM inside the Game Boy itself (HRAM). A map of how this RAM is used can be found here.

A common fault with old computers is the failure of RAM chips, which can fail in many different ways, ranging from the totally obvious to the annoyingly subtle. I suspect that part of the GM76C256 RAM chip is no longer working properly, and at some point when playing, some element of the game (possibly a counter) misbehaves when encountering the RAM fault and crashes the system.

Another possibility is that the Memory Bank Controller has developed a fault, and is not paging the requested banks of RAM or ROM correctly when requested by the Game Boy. While it may be possible to buy a new GM76C256 and fit it as a replacement, it's unlikely that you'd be able to find another MBC1 chip except by scavenging one from another cartridge.

A weakness in this explanation is that I am unable to explain why such a crash would be mistaken as a removal of the cartridge by your Game Boy Player. I'm afraid I don't know enough about the operation of the Game Boy platform to be able to say whether these suggested faults could (or could not) be interpreted like this in real life. But I am fairly confident that even though your cartridge is faulty, it is unlikely to be a fake.

Not the answer you're looking for? Browse other questions tagged repair game-cartridge game-boy or ask your own question.

24
Why did Pokémon Red have so many overflow bugs?
5
What are best techniques for repairing a chemically damaged PCB?
11
How did Satoru Iwata compress Pokemon GS to fit two regions on a single cartridge?
9
Why do N64 cartridges use 2 different technologies for saving to the cart?
3
How do you switch ROM banks on Gameboy MBC2 Cart with INLRetro dumper