I've been trying to track down a 3D game from the late '80s/early '90s. It was on the Atari ST and featured simple polygonal (space)ships1 floating over flattish polygonal ground with the occasional berm that one could fly over. It was definitely not sprite-based. IIRC it was mouse controlled and the ships moved only in the plane (rise and fall but no tilting or banking). It used a third-person viewpoint, fixed relative to the ship (low/ground level and behind IIRC) and the gameplay was (to at least some extent) open world (i.e. not restricted like e.g. Zaxxon). The version I saw was a demo (probably off of a cover disk) and I believe it was a shooter (pretty sure it wasn't Elite or anything similar). I've looked through ST Format and ST Action and some of the online gaming sites but haven't found it. Does this ring a bell for anyone?

1 Simple as in under 10 vertices per ship, flat shaded but not texture mapped.

Rough drawing (from memory) of what it sort of looked like; the actual graphics were much nicer: 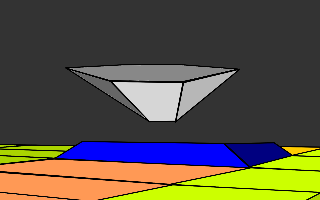 It may have been an early preview of Starglider 2. Its graphics are the closest match for what I recall but there are still many major differences.

The following don't match what I recall (differences listed):

I'm starting to think this was either a very early preview of a work-in-progress or, as LangLangC pointed out, possibly a game that never ended up being sold commercially.

One other obvious possibility is that I am completely misremembering the details. Memory is, after all, notoriously inaccurate.

I'd say Zarch or as it was way more popular Virus.

The game was originally conceived for the Acorn Archimedes, but soon ported to basically all platforms of the late 80s 16-bit era. There was a real hype.

In fact, it was first distributed as a demo called 'Lander' with every new Archimedes computer, Making a really good case for buying one: 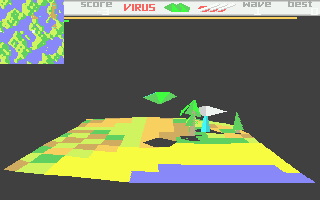 I'm virtually positive the game was Thunderstrike released in 1990 for the ST, Amiga, and DOS. The version I had was probably an early demo since I don't recall the various splash screens (besides the loading screen). The design of the loading screen, world and ships, the POV, as well as the gameplay are very close to what I recall and the ship selection screen (which I had forgotten) definitely rings a bell. 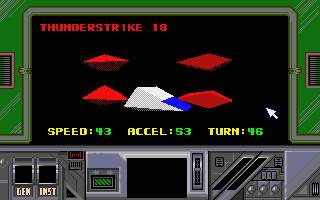 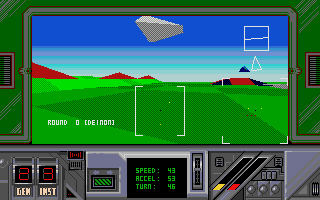 Both screenshots from Moby Games.

Thanks to Matt Lacey for prompting me to take another look for this game.

Your description make me think of Alpha Waves (a.k.a. "Continuum" outside of Europe) I had as a cover disk of a special issue of "ST Magazine" called "ST PC Disquette n°1" in France. Unfortunately I don't have the booklet anymore but I still have this floppy, which was playable on both ST and PC.

Edit: the "ship" can be changed in different shapes with more vertices which isn't shown in the video, here is an example:

Was it The Sentinel? Surprised I didn't think of this when I up voted your question yesterday! More info at Atari Mania.

Just for a comedy fifth option: The somewhat unsung but interesting little thing known as "Simulcra"? I can't even remember much of it but it did involve piloting a small ship with limited movement around a sparse 3D landscape a bit like what you describe.

Not the answer you're looking for? Browse other questions tagged gaming identify-this-game atari-st or ask your own question.

4
What's the name of this game on the Amstrad that had red-blue separated 3D?
38
Where and what was Haunt.bat? A game pre-loaded on a c1992 PC
8
Can anyone help name this game?
13
What was this game with a "Conan" style character on Atari ST?
13
PET space arcade game with surprisingly good graphics
4
Game from the mid-nineties with hovering vehicles
2
Seeking source code for Balls (Atari ST/STOS game)
2
What capacitors to use in Atari 1040STE power supply
5
Cold war submarine game for the ST
41
Looking for a PC 2D platformer game from the mid-2000s or earlier