What's with the empty space on this die?

What struck me about this image is the amount of empty space! If you look at a modern-day chip, say a Skylake or whatever, there are not going to be large gaps between the gates. The 555 has a lot of space also. I looked at the ARM 1 die, and though not as extreme, I saw similar spaces. It doesn't appear to be for manufacturing reasons; they clearly have a high enough "resolution" (is that the right word) to make intricate structures.

But in the picture below, it looks to me as though they could easily have bunched things up a bit to take less space. I believe that would have meant they could fit another few dies on the wafer, increasing yield and decreasing cost.

So what is the reason they used to leave those spaces, and why does that reason not hold now? 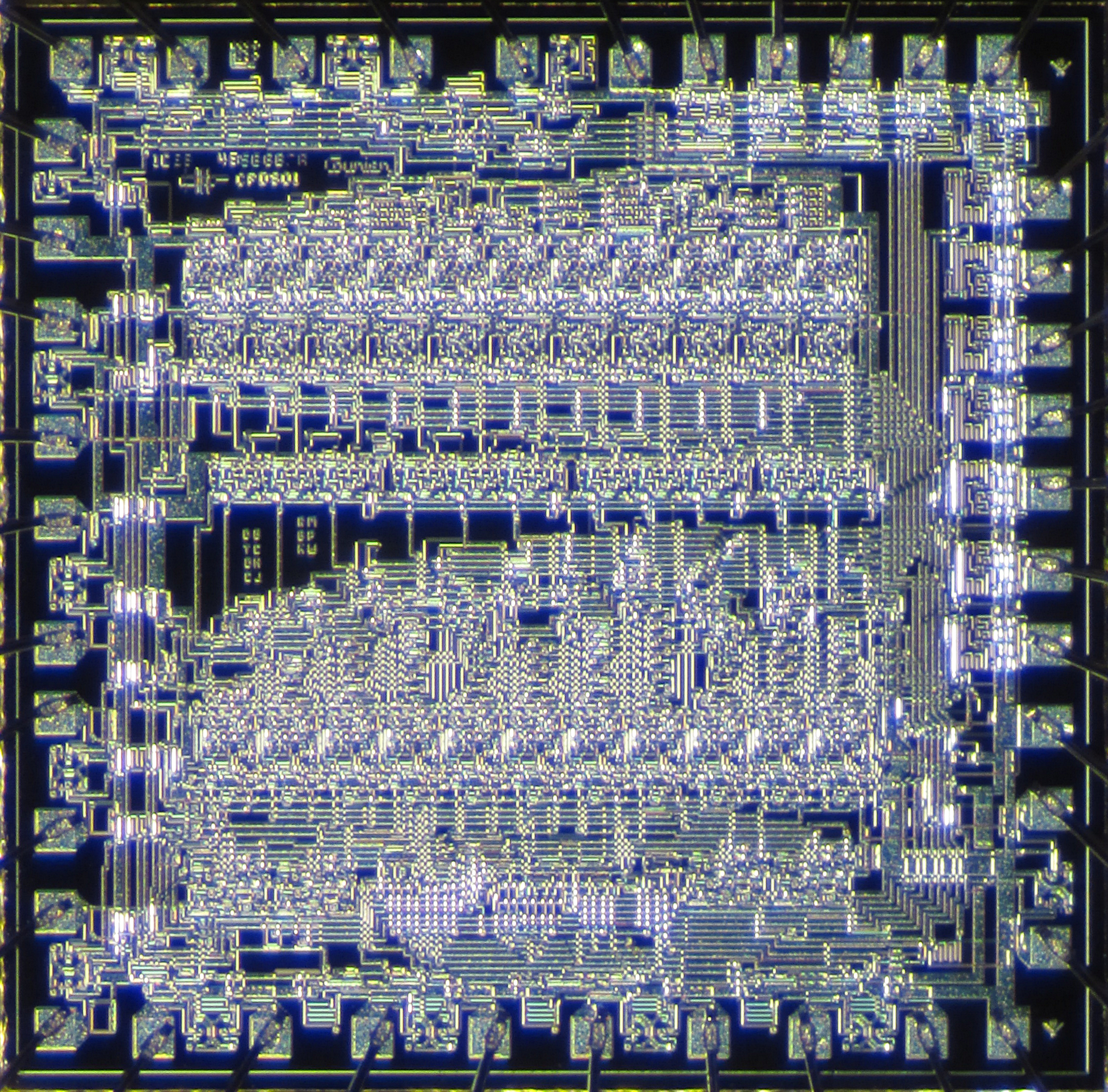 What struck me about this image is the amount of empty space!

I have a hard time seeing much empty space here. These are mainly a lot of small areas each defined through the gate structure.

If you look at a modern-day chip, say a Skylake or whatever,

I guess you have some pictures in mind where a whole Skylake is shown about the same size than the 2650. This leads to some easy misconceptions:

Compared it at that scale, you will notice, that 'seemingly' unused areas on a Skylark are way larger than with the 2650 above.

there are not going to be large gaps between the gates.

It's not between, rather within.

It doesn't appear to be for manufacturing reasons;

Well, there are those as well. The main reasons are:

I guess that's because the traces actually were laid out manually, and arranged neatly.

Neat layouts are usually also the best (*5). It's a situation where our sense for beauty meets with usefulness.

But in the picture below, it looks to me as though they could easily have bunched things up a bit to take less space.

It wouldn't have freed up much space, so no space to squeeze in more functionality.

I believe that would have meant they could fit another few dies on the wafer, increasing yield and decreasing cost.

First of all, that's only a straight payout if increased cost for design, testing and potential higher defects (due more complex structure).

With the above photo it's rather clear that there wouldn't have been much size reduction possible. Even when ignoring the size request for pads, there is in each direction a structure that will need the full height or width. Layout of this structure is defined by it's working, so mirroring it or flipping it to combine 'holes' in one area would result in a greatly increased surface need, as now busses would have to be rerouted. Not to mention speed decrease due a longer signalling path. The 2650 seems to be already a very neat one with its few and clean bus structures.

So what is the reason they used to leave those spaces, and why does that reason not hold now?

Again a misconception. Today, the relative gaps are way larger. Not at least due the use of premade, laid-out blocks. It's just due to the much smaller structures that it doesn't show up as obviously.

*1 - No matter if it's with PCBs or chips - in the latter it's even more important.

*2 - At least in the affordable range.

*3 - after all, the metallic connection layers are the PCB of a chip.

*4 - Which again is a way to achieve (or keep) high speeds, possible because of connections being as direct as possible.

*5 - This does not include such with additions made for beauty. Like everywhere, form follows function - and adding to that will reduce the synergy.

Chips of that era were done by hand layout, typically colored pencil on mylar. Hand layout is not automatic, and thus not fast, neither completely predictable in die area in advance. Portions of a layout might be done by different people at different times and/or with different skill levels.

Floor planning was done before layout, and was thus based on estimates of the various sub-block sizes, so some breathing room might be left to be conservative about how well the layout specialist might be able to fit their sub-block into the layout. Sub-blocks might also have been allocated to layout in nice rectangles, even though those rectangles might not pack at maximum efficiency in the final die size.

Thus, even high volume consumer chips might end up with gaps between blocks, or even large holes in the middle of a layout, especially when a layout specialist exceeded her/his budgeted component density.

There may also be reasons to be conservative about density at the planning stage for reasons of thermal spreading, capacitive coupling, package pinout limitations, and etc.

Not the answer you're looking for? Browse other questions tagged hardware chip or ask your own question.

7
What is this (seemingly optional) box around my Sun's idprom chip?
11
Mapping more than 64kb of address space
9
8086 pinout and address space limit
9
What's the purpose of HOLD command in 6502 stack pointer
5
Did the PC/AT-bus use its expanded address space?
7
What were the first chips with hardware support for SPI?
1
Will any modern EEPROM programmer work with the IP3604/КР556РТ5?
3
What's the Motorola microprocessor with two sets of registers to avoid costly context switch?