I refer here to 'screen-based programs' that are not actually graphical, but take full advantage of the screen as a two-dimensional array of 80x25 characters, as opposed to typical 'command-line programs' whose output is essentially one dimensional.

MS-DOS provided compatibility for command-line programs. A single binary could run on many different and incompatible computers, provided they all ran MS-DOS.

MS-DOS did not provide compatibility for screen-based programs. In theory it did but in practice it didn't; the screen display routines provided by the operating system were so slow that we all wrote directly to video RAM instead, which meant our programs would only run on an IBM PC or clone.

CP/M was in a sense the precursor of MS-DOS. Did it provide practical compatibility for screen-based programs? Could CP/M versions of programs like VisiCalc and WordStar provide a single binary that would run on any Z80 machine with CP/M, or did they have to be reassembled or modified for each incompatible computer?

Two-dimensional positioning was not provided by basic CP/M; the BIOS provides only a single-character console output call, and does not define any control characters. Furthermore, unlike MS-DOS there was never a dominant hardware configuration behind CP/M so going straight to hardware wasn't an option.

In practice programs tended to ship with support for a variety of popular terminals — the Hazeltine, the ADM3a, the VT52, etc — and a setup utility to pick your display type. In implementation terms, that usually didn't require much more complexity than substituting the proper control codes. Programs were supplied as a single binary and small amounts of data were modified by the setup utility.

The problem is essentially the same as that solved by the termcap database in UNIX, but with each program providing its own solution.

A later CP/M extension, GSX, provided hardware-independent graphics display and developed into the virtual device interface underlying GEM, but was far too late to make a substantial impact.

Sample setup, from Turbo Pascal; upon launching TINST the user may configure either the screen or commands (i.e. keyboard control codes): 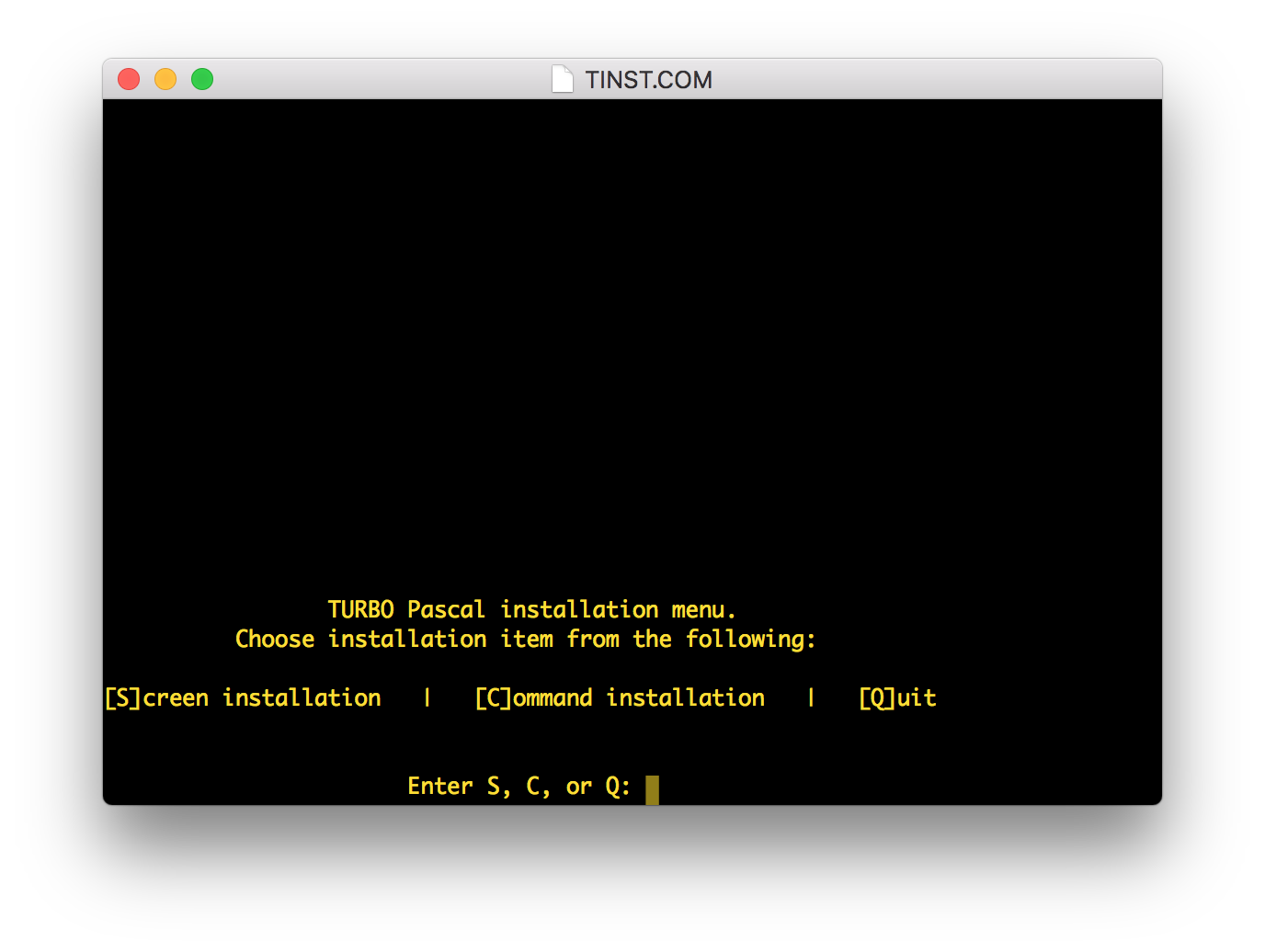 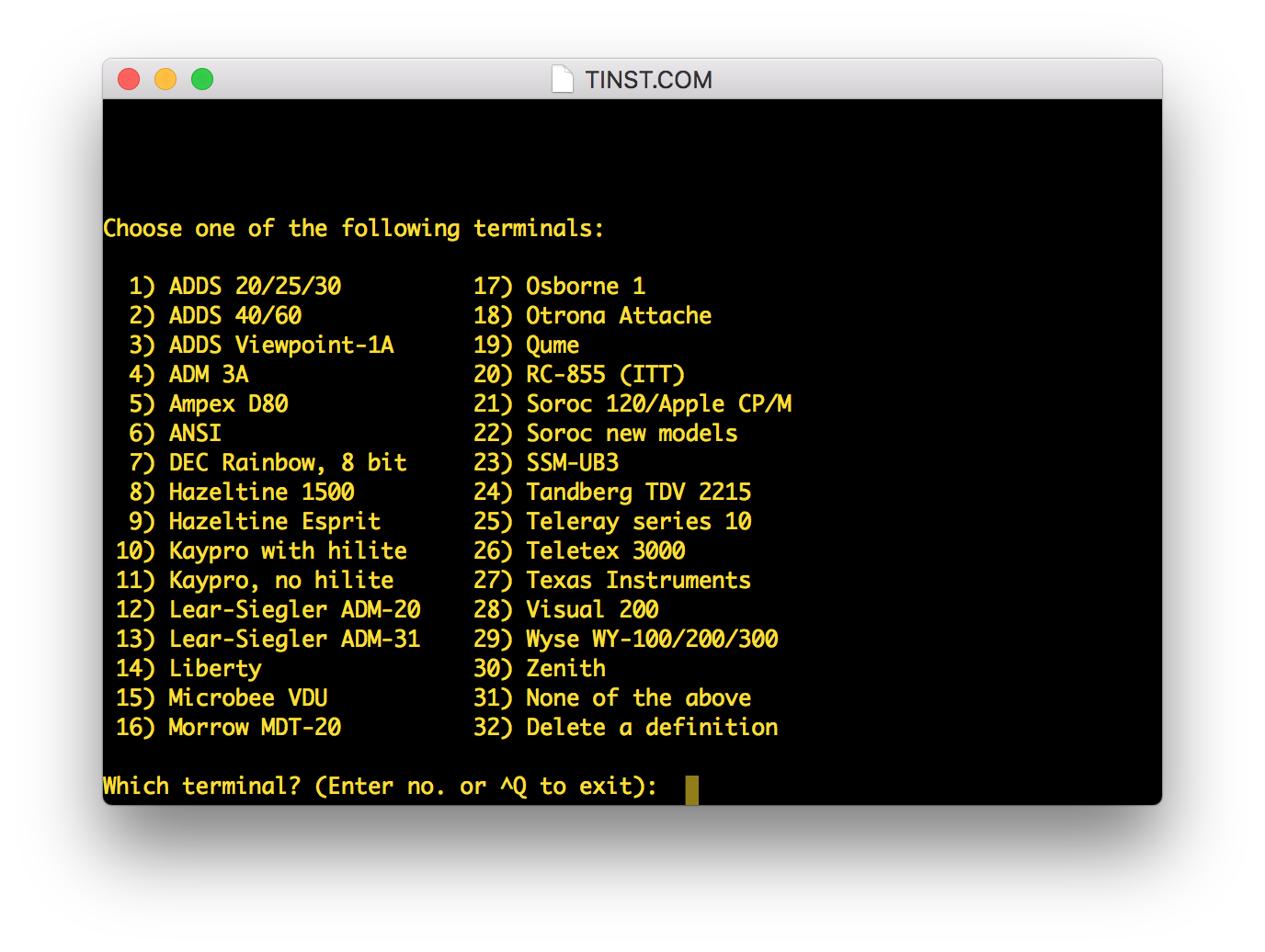 All of which are supported by the single binary in a single distribution, of less than 132kb in size (including sample programs).

Input selection is no more complicated than asking the user to press the keys they want: 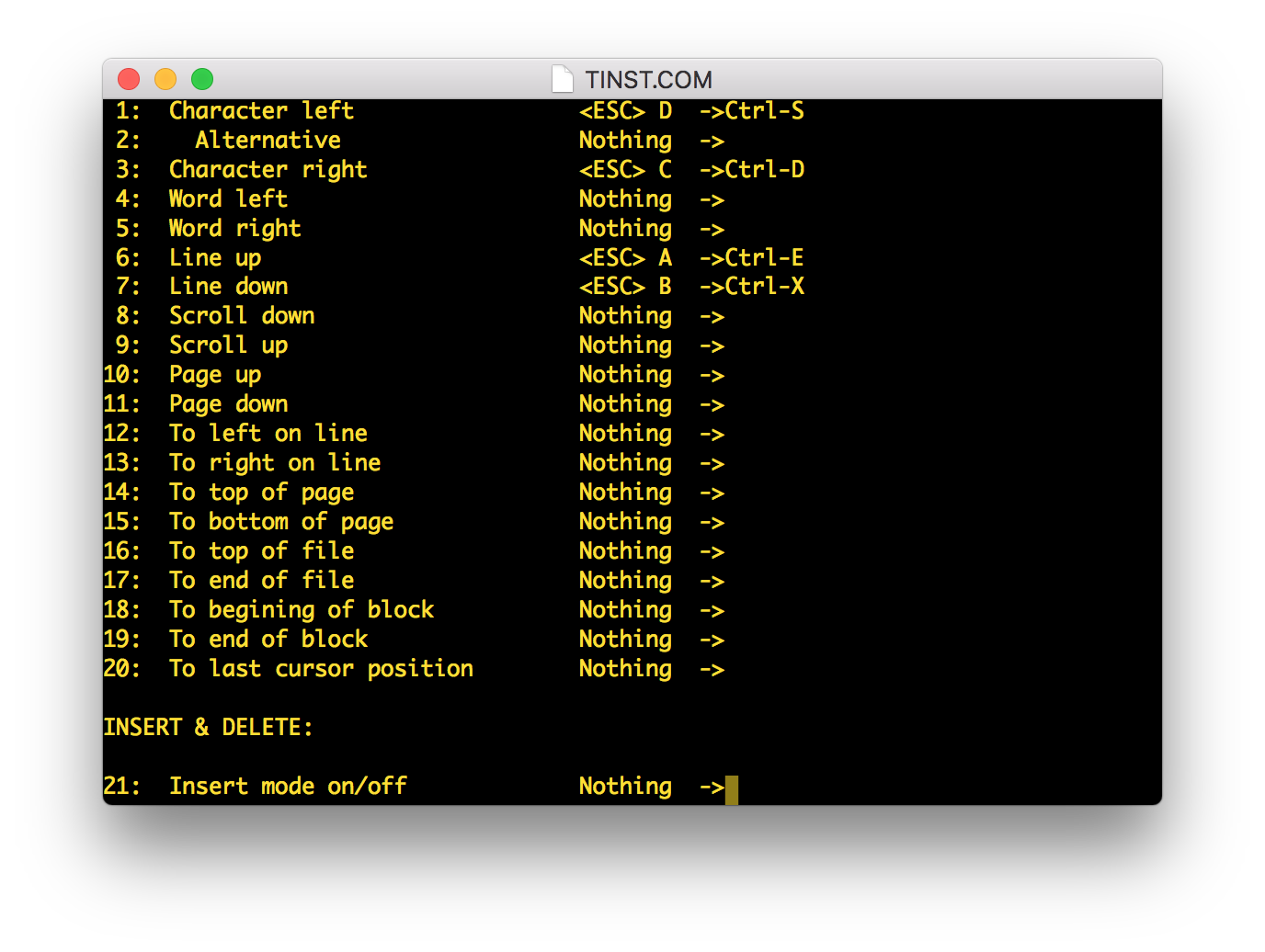 It goes on a while — that's just the first screen.

Others have covered the bit that CP/M did not provide any abstraction of the output device so each program needing it, had to be instructed in what characters (usually escape sequences) should be sent to the console to do a specific task.

I just want to mention that WordStar not only had the ability to shortcut printing out menus and other information by pressing a key (which was then interpreted) but also the ability to write directly to display memory to get incredibly faster output. To my knowledge no other commercial program supported that. It even saved memory so larger documents could be edited.

It is described in http://www.bitsavers.org/pdf/microPro/Wordstar_3.0/Wordstar_3.0_Installation_Manual_May81.pdf in the section "DIRECT STORAGE ON A VIDEO BOARD" on page 6-5.

Actually, MS-DOS doesn't give you any enhanced compatibility. The screen simply was MGA/CGA/EGA/VGA text mode which was 80xSomething by default. Cursor positioning, etc was done by BIOS calls and the programs ran directly on the CPU and the programmer could do whatever he pleased. It was just a nice-to-have to return to a functional DOS after the program was done.

So MS-DOS had to run on IBM-PC or compatible which meant MDA/CGA compatible hardware screens.

CP/M on the other hand was for any hardware, mostly mechanical teletypes at first. Terminals had really evolved after CP/M had created a market for more complex terminals. In early computing, you mailed in your punchcards or tapes and got them back with a printout of the results. "Hacking" - typing in stuff life on a computer - wasn't common before the late 1970s.

To add to the other answers: While there was no support in the operating system itself, there were a couple of attempts at a terminal abstraction library that could be linked with programs. GSX (mentioned above) contains a set of text-mode output functions for cursor positioning, clearing areas of the screen and so forth, though it would have been a very heavyweight solution to link the entire GSX system just for its text mode functions.

ZCPR (a replacement command processor for CP/M written by a group of hobbyists) eventually gained a terminal capabilities library. The characteristics of a terminal would be stored in a .Z3T file, which would be used by any ZCPR-aware program for screen highlighting, cursor movement etc.

Not the answer you're looking for? Browse other questions tagged cp-m or ask your own question.

12
Why did Amstrad choose such bank combinations for its all-RAM mode in +2A and +3 Spectrum computers?
17
Why did the Z80 with 4-bit ALU out-perform the fully 8-bit Intel 8080?