386SX, NES and how much did data lines really cost anyway?

In 1988, Intel introduced the 80386SX, most often referred to as the 386SX, a cut-down version of the 80386 with a 16-bit data bus mainly intended for lower-cost PCs aimed at the home, educational, and small-business markets, while the 386DX would remain the high-end variant used in workstations, servers, and other demanding tasks. The CPU remained fully 32-bit internally, but the 16-bit bus was intended to simplify circuit-board layout and reduce total cost. (From Wikipedia.)

So that indicates extra data lines were very expensive; the difference between a 386SX and 386DX computer came to hundreds of dollars. Okay. (The 8088 and 68008, and for that matter the 68000 itself, had likewise narrow data buses relative to the CPU internals, but in those cases maybe there were considerations like timely availability of support chips. The 386SX is the purest example, being developed and released three years after the full-width version of the chip.)

But hang on a minute. Take a look at the pinout of the NES cartridges: https://forums.nesdev.com/viewtopic.php?f=9&t=14924

The most remarkable feature, I think, is that it has an address and data bus (22 lines total) for the game program – and then a whole other address and data bus for fetching tile data. The point of that is clear: it provides double the bandwidth, lets the console fetch code and tiles simultaneously, allows higher quality graphics without having to provide extra RAM for caching tiles.

But if there was a problem with affording an extra sixteen lines in a $2000 PC in 1988, how on earth could Nintendo possibly afford to put an extra twenty-two lines, not only in a $200 console in 1983, but in every single cartridge? Okay the PC motherboard is a larger and more complex piece of kit, but that's going on two orders of magnitude difference in equipment cost, and five years difference in release date to boot.

How does that possibly make sense? Was Intel just engaging in market segmentation, or is there some technical consideration I am missing?

The situation with the 386(DX) v. 386SX is similar to the situation with the 8086 v. 8088. The big issue isn’t the data lines (although they do have an impact on complexity and cost when routing a whole motherboard), the issue is mostly the cost of support components: motherboard chipsets (whether integrated or discrete), memory, etc.

By going back to a 16-bit bus, the 386SX allowed motherboard designers to use techniques and components they knew well from 286 designs. The 386SX was released years after its full 32-bit older sibling, but in those years the 386 didn’t sell all that much — 386 systems were significantly more expensive than 286 systems, not significantly faster than the higher-end 286 systems for most DOS applications, and thus there was no major incentive for most PC users to buy a 386 rather than a 286, and no major incentive for PC manufacturers to produce cheap 386 systems. (Although the 386 was released in 1985, and the SX in 1988, 386-based systems only really became popular in the early 1990s, not coincidentally following the release of Windows 3 in 1990.) The 386SX allowed PC builders to produce 32-bit systems for a cost similar to 286 systems, since most if not all of the supporting paraphernalia was the same (of course they wouldn’t sell them for a price similar to 286 systems).

There’s also some amount of market positioning going on: the 386(DX) was supposed to be a high-end CPU, and was typically used in high-end systems with expensive components (cache, EISA buses, many memory slots etc.), whereas the 386SX was marketed as a low-cost CPU and therefore it was acceptable to sell it in lower-end systems.

The Red Hill main board index shows a number of examples of 286, 386(DX) and 386SX motherboards, which gives an idea of the complexity or simplicity of the various designs.

So that indicates extra data lines were very expensive; the difference between a 386SX and 386DX computer came to hundreds of dollars.

Not really. Sure, they need to have some room and routing - and thus more thru hole connections, but over all, doing a 32 data lines instead of 16 isn't a big deal.

Yup, makes sense for a game system with a separate graphics system to extend its databus onto the cartridge. This allowed placing (ROM) data right onto the graphics bus, thus saving the need for installing more video RAM, which would have otherwise been needed to hold that data (after being copied into from the game ROM).

But if there was a problem with affording an extra sixteen lines in a $2000 PC in 1988, how on earth could Nintendo possibly afford to put an extra twenty-two lines, not only in a $200 console in 1983, but in every single cartridge?

As said (point#1), the additional cost for the lines itself do exist, but are minor. It's again about component installment. Or more exact with the NES, it's about not installing components. Without the second bus, the video part would have needed additional RAM to hold tile (and other) data. With the bus extended to the cartridge, no (large) default RAM was needed, but cartridges did bring their date and inserted it right into the video address space.

This saved the installation of large(r) amounts of RAM in the base console which otherwise would have needed to be present to hold tile data, loaded from the game ROM.

It's in fact a very nifty solution as

Obvious, the amount of data lines isn't anywhere important in the considerations done.

*2 - Such a board could offer 512 KiB, 2 MiB or 8 MiB total RAM, the latter being rather extreme for low price systems in the late 80s - whoever could afford 8 MiB, could just as well buy a 386 DX system right away.

*3 - Not as cheap as one may think, as there were even IBM PS/2 machines with just two SIMM sockets.

It's not just how many data lines, but where you have to route them.

While the PPU on the NES does have its own independent RAM, it is connected only to the PPU. To update the tile RAM from the main CPU, all accesses must go through the PPU. This limits the extra 8 data lines and 11 address lines (for a 2 KB address space) to a small area of the board, as the PPU and its RAM are right next to each other.

Here is a photo of the part of the board in question: 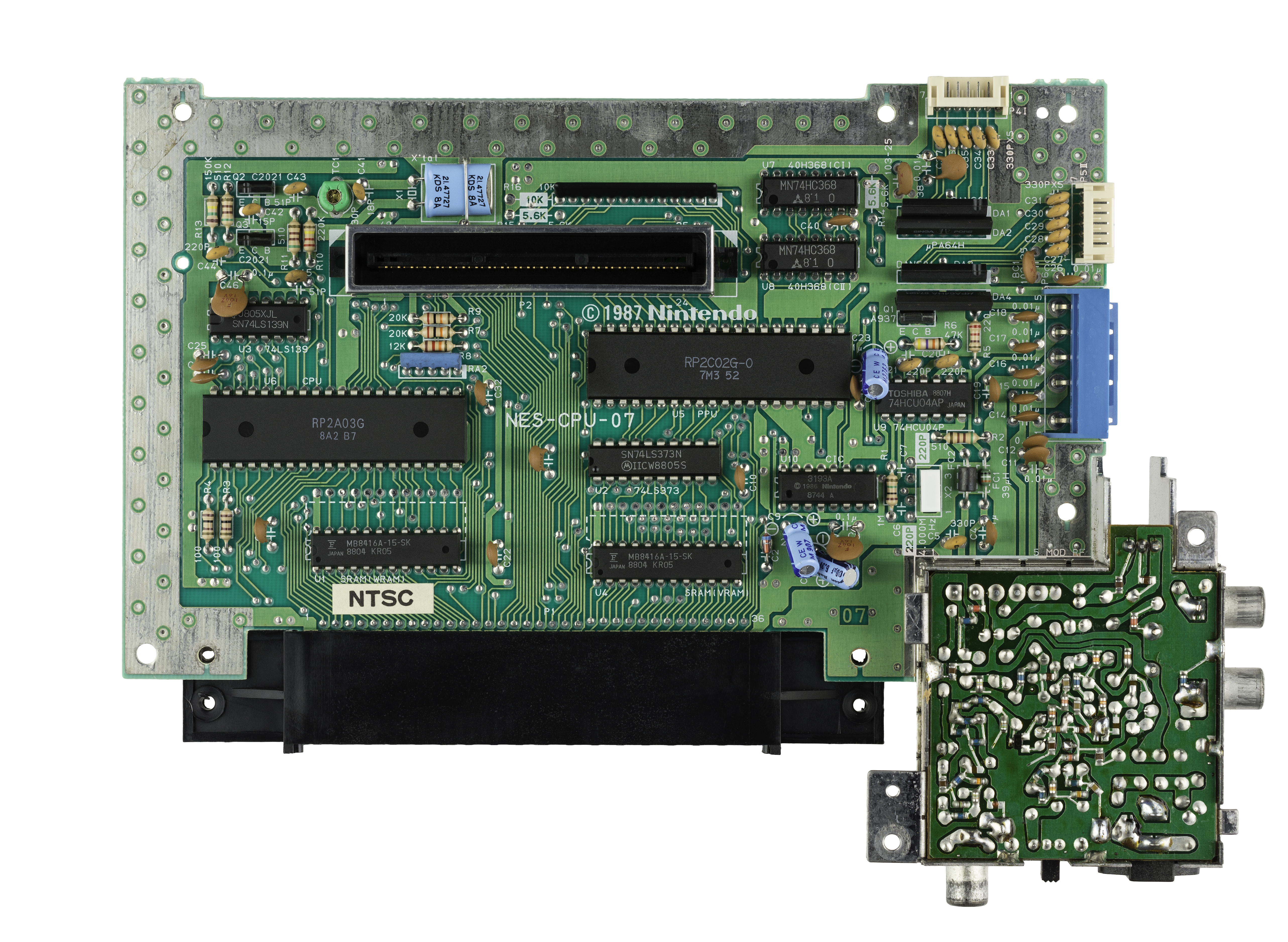 You can clearly see the two RAM chips marked SRAM at the bottom. One connected to the CPU data pins directly, and one through an LS373 buffer to the PPU's data pins.

Here is part of a schematic for the NES mainboard: 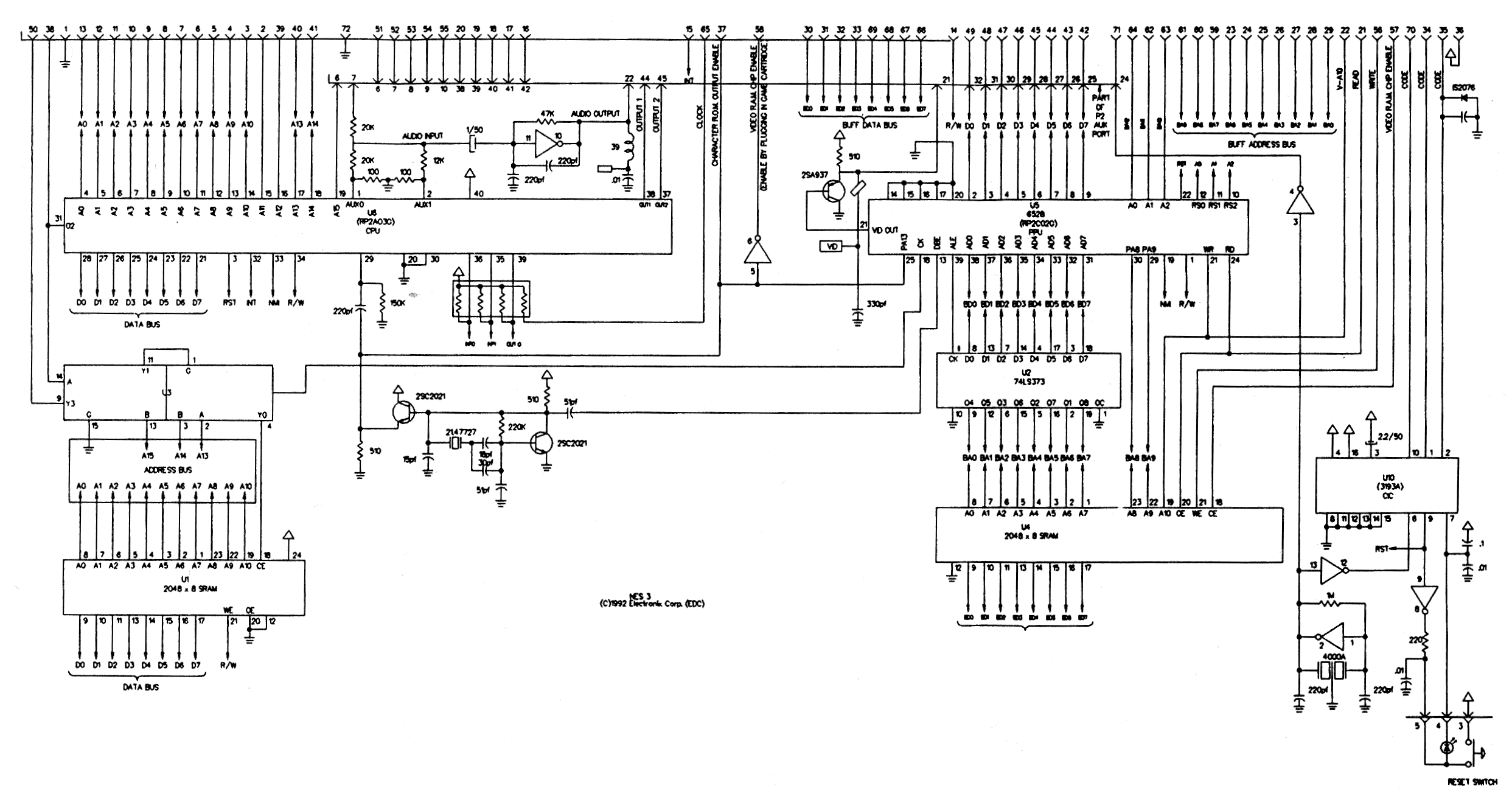 A full 32-bit 386 processor mainboard needs to route all the data lines over a much larger area: to the chipset, to the IO expansion slots, to all the RAM chips or SIMM slots, and to the ROM chips. All over the board, basically. Having some experience with PCB design, I can say that routing that many signals all over a board is much more difficult than in just a small region.

Additionally, the NES ran at 1.8 MHz, while Intel 386 processors were introduced at 12 MHz, soon increasing to 33 MHz. At higher speeds, the routing of a board becomes more critical as trace length, inductive coupling and other factors which can be largely ignored at 1 MHz become increasingly dominant design concerns, again making board design harder.

Not the answer you're looking for? Browse other questions tagged hardware nes cost 80386 or ask your own question.

4
How much did a serial terminal cost?
23
Why not constant linear velocity floppies?
6
Did the PC/AT-bus use its expanded address space?
5
How much did it cost to develop the Z80 CPU?
9
Did multiplexed address/data lines make memory access slower?
1
Why was the SWTPC 6800 Computer System cheaper than the Altair?
27
How much did the first hard drives for PCs cost?
22
Did any European computers use 10-line fonts?
23
What accounted for the cost of ENIAC?